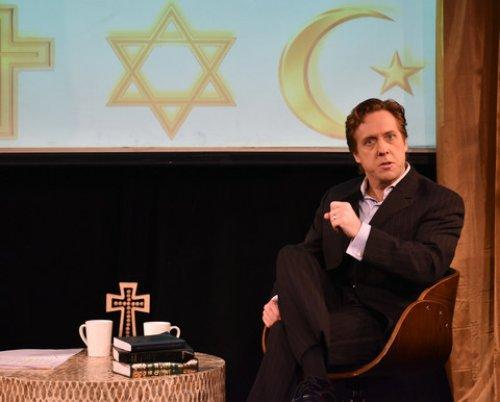 {Note: This is a review of the previous engagement which ran at the Playroom Theater.}

That’s one reason I’m here – to clear my name from all the bad press those writers have given me. The God those authors have created is nothing like me. And some of the things they’ve claimed I’ve said!

At a St. Louis, Missouri television studio in “the slightly distant future,” we meet Dr. Thomas Isaac Rehan. He is a popular preacher who drives a

Lexus, lives in a sprawling compound and whose wife Velma and their children are away ministering to the needy in Paris, France. His wry technician Roberta is a cancer survivor and efficiently manages the broadcasts. After a delay, the affable God arrives from a nearby Holiday Inn. There’s pointed interrogatory exchanges, natural disasters and startling revelations as the play reaches its melancholic conclusion. 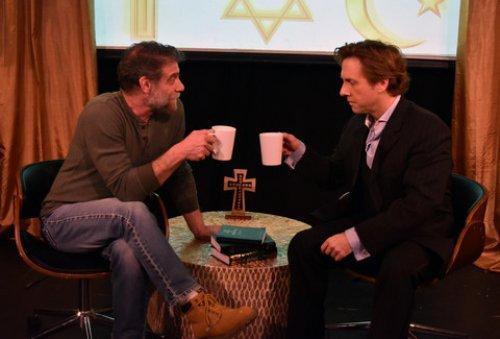 Filichia has had a long and storied career as a theater critic and author of several books on the topic. His having witnessed a multitude of productions, this immersion informs God Shows Up’s fine structure and technical command of playwrighting. The bouncy dialogue has Shavian passages and the expertly defined characters make terrific roles for actors to play.

Director Christopher Scott’s forceful staging lands all of the verbal and visual jokes while maintaining the play’s thoughtful aspects. The small stage is dominated by two plush chairs and Roberta’s control station off to the side. Scenic designer Josh Iacovelli’s witty efforts also include Buddhas, crucifixes and other religious totems on shelves. Joan Racho-Jansen’s lighting design veers from crisp brightness to ominous otherworldliness when needed. 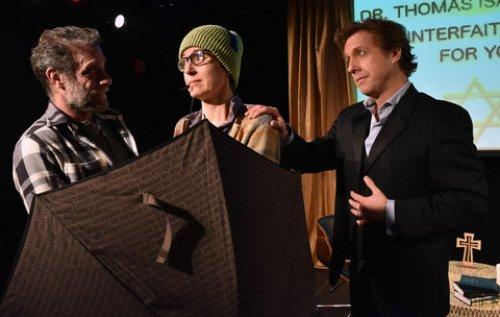 As it goes along, God Shows Up strains to sustain its length of 75 minutes and it arguably may have made for an effective one-act play. However, Filichia’s crackling writing and the cast’s snappy performances ultimately put it over.