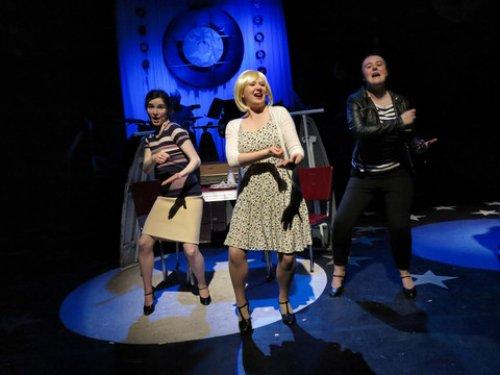 The creator of Betty & The Belrays, now at the Theater for the New City, pretty much dares you to compare his well-meaning, but cartoony, new musical to Hairspray, a comparison in which the new musical fares poorly.

Written—book and lyrics—and directed by William Electric Black, with music by Black, Valerie Ghent and Gary Schreiner, Betty, like Hairspray, tells the story of a white high school-aged girl, the eponymous Betty (Paulina Breeze), living in a racially divided city, here 1963 Detroit, where Motown and its distinctive style are being forged.

The similarities keep piling up:  both take place in the sixties rife with anti-segregation activism; Betty’s parents, the Belaroskys, Joe (John Michael Hersey) and Mary (Gretchen Poole) are working class stiffs with All in the Family-like prejudices; Betty (Paulina Breeze) becomes entranced with black music, particularly the black girl group the LoveJones led by Joy Jones (Alexis Myles) whose imperious mother, Miss Loretta (Aigner Mizzelle) bears an astonishing resemblance to Motormouth Maybelle as matriarch and mentor; and, finally Betty, like Tracy Turnblad, commits civic disobedience to support integration, though in Betty’s case the results are far from auspicious, awkwardly twisting Betty from a flippant comedy to an agit-prop drama. 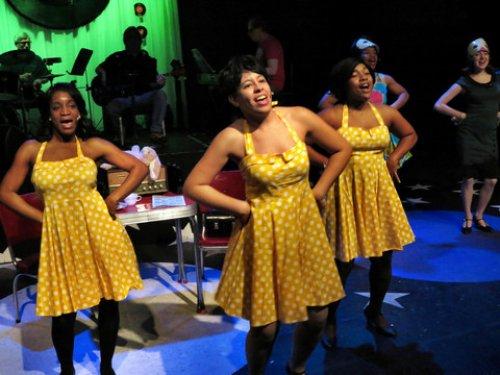 Hairspray benefited from the wry, campy wit of John Waters, rethought by Mark O’Donnell and Thomas Meehan, with the added attraction of the period perfect songs by Marc Shaiman and Scott Wittman.

The libretto of Betty & The Belrays is clichéd and obvious with cartoony characters spouting sitcom level lines.  The songs, however, though far less witty than those of Hairspray, are wonderful representations of the period, helped by Jeremy Lardieri’s choreographic moves that easily bring to mind those wonderful groups like the Supremes.

Betty’s transformation from empty-headed girl-group leader to social change provocateur is sudden and unbelievable, considering that her story begins in a working class kitchen (lovingly, but sparingly, designed by Lytza R. Colon) where black music on the radio inspires her. Eventually she puts together her own girl group, the Belrays consisting of herself as lead singer with meek sexpot Connie (Kalia Lay) and wiseass delinquent Zipgun (Alexandra Welch) as backups. 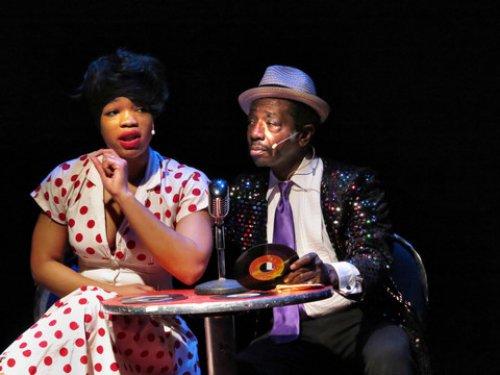 Mentored by Miss Loretta who keeps them under wraps until she thinks they have something to say, the Belrays are an immediate success backed up by the LoveJones whose resentment builds and builds until the two girl groups confront each other, leading to Betty’s rededicating her life to fighting segregation in the South with abrupt and disastrous results.

Black appears to have directed the cast to be unsubtle, cartoony, often screechy with the worst example being Ms. Welch as Zipgun.  She is written and acts the part as a nitwit who spouts nothing but punchlines.  That this character and the others manage to register as human beings is a tribute to the determined cast.

Particularly effective are Ms. Myles as Joy and Ms. Mizzelle as Loretta whose sheer  humanity shines through the weak, corny lines they are given. 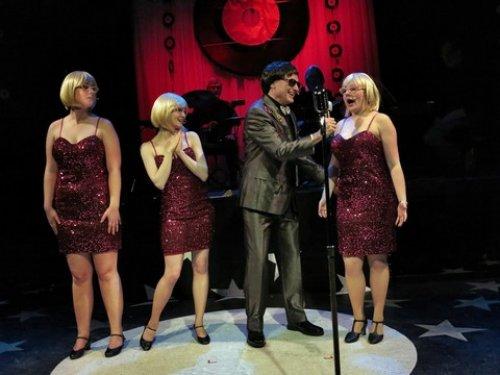 Helping to hold the show together is Levern Williams as a radio DJ.  He has a natural charisma and command of the stage.

Ms. Breeze, in an unflattering blonde wig—copies of which were given to her Belray cohorts—communicates a dizzy innocence and total lack of sophistication that makes both her rise as a songwriter and SNCC member hard to accept.

It’s clear that Mr. Black wants to make an important historic statement with Betty & The Belrays, but could not find a consistent dramatic/comedic tone. 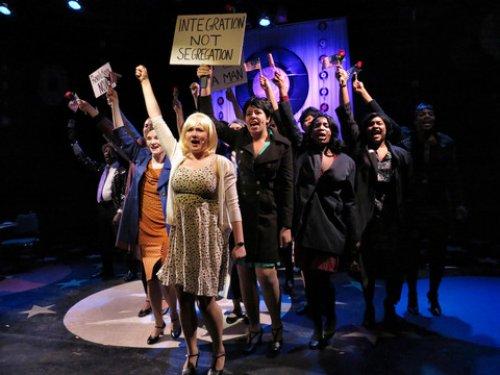 Susan Hemley must be applauded for her costumes which range from homespun simple to garishly glittery.

A mostly young audience took to the snappy songs and the choreography getting a kick from this taste of the past that has a phony façade of history.

Running time:  two hours and 15 minutes without an intermission