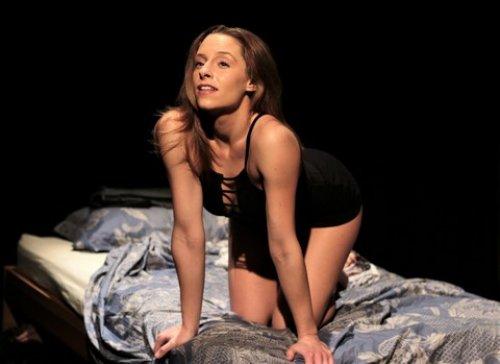 The play was conceived and directed by Kristin Heckler, who, at the top of the performance under review, explained that she and the production’s three performers—Sarah Raimondi, Jacob Sebastian Phillips, and Pauline Sherrow—developed the project over a four-year period. They improvised to help create scenes, drawing on interviews with actual women in the adult-film industry, along with other porn-related sources. 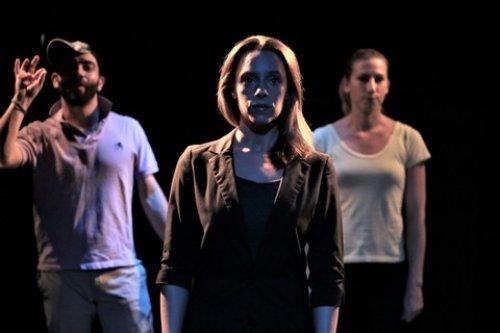 We learn early on that high-school senior Lauren (Raimondi)—who has signed and reputedly broken an abstinence pledge—has been watching video with explicit imagery since she was a pre-teen. She finds the idea of being a part of the industry not just arousing but also liberating and even exhilarating.

Sex scenes are choreographed in a stylized way. The performers keep their distance from one another while miming the carnal acrobatics—an effective directorial choice. There is some brief partial nudity, nothing full-frontal. Extremely strong language spills out of the actors’ mouths in certain scenes. 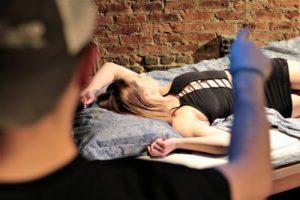 The set consists of little more than a bed-like platform in the center of the small stage. No scenic designer or costume designer is credited. Lighting designer Sara Christopher does what she can with limited space and lanterns. She helps set the sexual choreography apart from the more naturalistic, nonsexual moments. Sound designer Emily Auciello fills the playing space with a funky 1970’s musical vibe, which is heard both before and during the show. There are plenty of “cow-chicken-cow-cow” wah-wah pedal flourishes.

The story unfolds in a series of short scenes which seem impressively well-crafted, considering that they were developed through improvisational exercises. Touches of humor prove integral to the show’s success. On the downside, the play ends abruptly, with loose ends left dangling. A scene between Lauren and her father, after her secret life becomes known to him, is one of the best in the production. But the script doesn’t follow through with the arc of the father-daughter relationship or on his surprising advice to her to face up to her choices rather than hiding from them.  (We do learn that she eventually writes online essays about her porn work and that she makes a TV appearance to explain herself). A scene between Lauren and her mother, after Lauren’s secret is out, might have been interesting—but we don’t get one. The very last moments of the play’s final scene, set in a restaurant in Italy, are befuddling.

Nevertheless, Exposed is remarkable for its honesty and nuance. And it proves once again that a huge budget and flashy production values aren’t essential components of smart and invigorating theater.

Running time: 75 minutes with no intermission.

A smart, expertly performed drama about a college student who pursues work in pornographic films, soon to discover the limits on her sexual freedom.