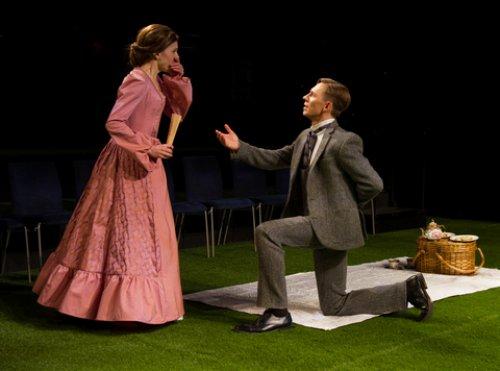 Kristen Calgaro as Gwendolyn and Jed Peterson as Jack in a scene from New York Classical Theatre’s production of “The Importance of Being Earnest: Two Ways” (Photo credit: Jody Christopherson)

Cucumber sandwiches, a handbag checked at a Victoria Station cloakroom, Bunbury and all of the other enduring pleasures of Oscar Wilde’s classic comedy are to be joyously experienced anew or for the first time in director Stephen Burdman’s wondrous dual productions of The Importance of Being Earnest presented by New York Classical Theatre.

It’s billed as “Two Ways” because this event is comprised of differing versions performed in repertory. There is the self-explanatory “Conventional Casting” and the “Reversed Casting” where the same superb ensemble plays a different role of the opposite gender in the identical previous performer’s costume.  Each incarnation is a frothy delight faithfully affirming Wilde’s insightful wit and supreme dramatic construction through theatrical magnificence.

The medium-sized theater has a three-sided playing area with a black back wall. Production designer Maddie Peterson covers the stage and seating areas’ floors with artificial grass. There’s a blanket with a picnic basket and a porcelain tea set. In the second act the lawn is bare until a servant sets up a tray table to serve tea and there’s nothing on view in the third act. Absent of traditional Victoriana this stripped down The Importance of Being Earnest stimulatingly puts the audience front and center as at a sporting event. Without the distraction of elaborate furnishings there is the thrilling sensation of truly hearing Wilde’s sparkling lines coupled with visual brilliance.

The truth is rarely pure and never simple.

To lose one parent may be regarded as a misfortune; to lose both looks like carelessness.

The good ended happily, and the bad unhappily. That is what Fiction means.

Precisely striding, galloping, sashaying, in duel-like poses and stationary on the spacious green landscape, Mr. Burdman has his impeccably assembled company in perpetual dynamic motion with the collaboration of movement coach Andrea Andresakis.  Ms. Peterson’s inventive period costume design has the males in snazzy tweeds and formal wear and the females in vibrant stiff bustling and rustling gowns. Everything is enriched by the sustained sunniness of Driscoll Otto’s lighting design. 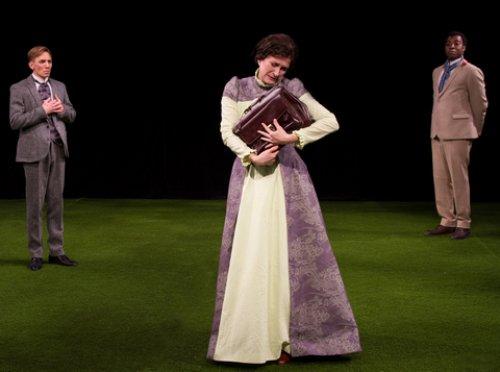 Jed Peterson as Jack, Tina Stafford as Miss Prism and Ademide Akintilo as Algernon in a scene from New York Classical Theatre’s production of “The Importance of Being Earnest: Two Ways” (Photo credit: Jody Christopherson)

Employing hearty English accents, the actors verbally caress Wilde’s ingenious epigrammatic dialogue to optimum effect through the guidance of voice and speech coach Joan Melton. Like a true visionary, Burdman has melded all of these singular elements into tremendously satisfying presentations that breezily play out.

The shows are done as “Panoramic Theater.” The audience is encouraged by a cast member to change their seats three times to another section during brief breaks, adding to the merriment. Burdman’s staging is vigorous from all angles.

Two London gentlemen have each created alter egos called Ernest. The young women they’ve become romantically linked to are both besotted with that name and won’t marry anyone who doesn’t have it. Others involved in the hijinks are a haughty aunt, a daffy governess, a dithery prelate and taciturn servants. From the ensuing farcical complications of mistaken identity, Wilde crafts an uproarious satire of English society and its class system.

Silently with his mane of steely gray hair, impassive expressions and rhythmic gait, the tuxedo-clad John Michalski gets the “Conventional Casting” off to a rousing start playing the first of his two butler parts, Merriman and Lane. Later on, the detached Mr. Michalski’s growling Donald Sinden-style delivery and minute comic timing are hilarious.

Beaming, animated and with his fluty cadences, the magnetic Ademide Akintilo is loquaciously commanding as Algernon Moncrieff. Lithe, charming and snappy, Jed Peterson is a winning Jack Worthing. Their bantering and bickering together is marvelous. 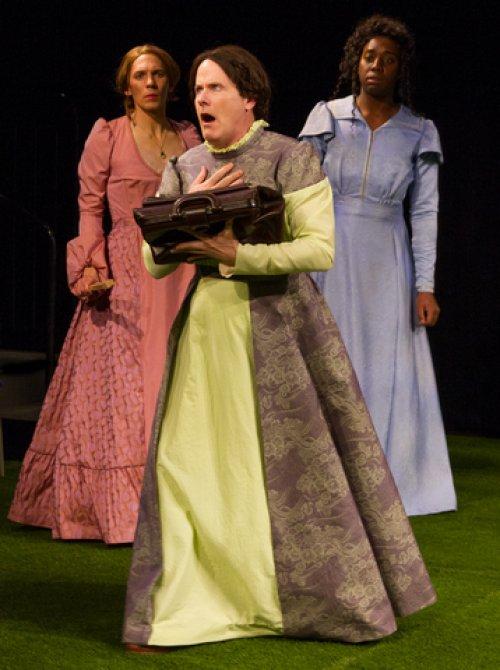 Waving a fan and histrionically tottering about, Kristen Calgaro is an enticing Gwendolen Fairfax. Girlishly solipsistic especially when reading aloud from her self-composed love letters to herself, Connie Castanzo is a caustically exuberant Cecily Cardew. Yes, these characters’ first names are the same as the Pigeon Sisters, the cheery flight attendants in Neil Simon’s The Odd Couple.

Nearly stealing the show with her purring Scottish burr and physical expressiveness as perhaps one of the most antically forceful Miss Prisms ever is the formidable Tina Stafford. Reveling in his character’s jagged religiosity is the dryly mirthful Clay Storseth as Reverend Chasuble.

As that renowned gorgon Lady Bracknell, Kate Goehring with her modulated imperiousness, drolly precise articulation and appealing subtlety puts her own remarkable stamp on this monumental role.

The battle of wills between Mr. Akintilo’s Cecily and Mr. Peterson’s Gwendolen is a delirious highlight of the “Reversed Casting.” The sight of the towering Akintilo and Peterson with his prominent Adam’s apple cavorting around bewigged in dresses while offering solid feminine characterizations throughout is sidesplitting. Peterson is particularly effective with his captivating smugness.

Most entrancing with her clipped veddy veddy vocalizing, leering and limber fluidity is Ms. Castanzo who consistently dominates here as Algernon. Ms. Calgaro’s Jack is a wonderful exhibition of physical and verbal bantam pugilism. Both inhabit their male costumes with playful ease. 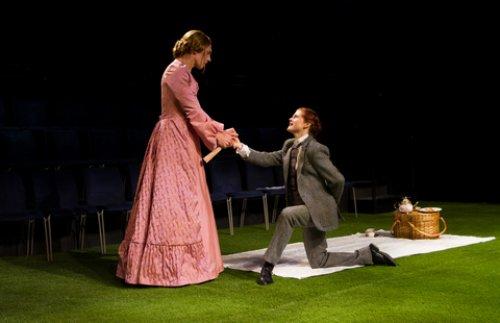 Jack Peterson as Gwendolyn and Kristen Calgaro as Jack in a scene from New York Classical Theatre’s reversed gender production of “The Importance of Being Earnest” (Photo credit: Jody Christopherson)

His jowly head encased in a white wig, his body sheathed in 19th century dowager regalia, moving around and standing still with the bulky grace of Margaret Rutherford, the basso Mr. Michalski is frequently hysterical as Lady Bracknell. His facial expressions upon learning that there are no cucumber sandwiches are priceless.

As she does with her imperishable Miss Prism, Ms. Stafford unearths amazing new layers with her feisty depiction of Chasuble’s spacy spirituality. Mr. Storseth is a marvelously fluttery Prism. Ms. Goehring makes a sly impact with her low-key appearances as the two butlers.

Since its 1895 London premiere, The Importance of Being Earnest has been revived numerous times, periodically broadcast on radio and television and had several screen adaptations. Quentin Crisp, Geoffrey Rush and Brian Bedford are among the notable males who have played Lady Bracknell in otherwise standard versions. Until these New York Classical Theatre productions, apparently no one else thought of this clever double concept.

Ideally, one would attend both editions of the cumulatively dazzling The Importance of Being Earnest: Two Ways.  Otherwise, “Reversed” does have the adroit novel genderbending but “Conventional” has a slight edge with its majestically straightforward interpretation. The three viewing options all have grand merits.

Founded in 2000, New York Classical Theatre’s mission “is to reinvigorate and create audiences for the theatre by presenting all-free productions of popular classics and forgotten masterpieces in public spaces throughout New York City.” Later this year The Importance of Being Earnest: Two Ways will be performed for free at several area parks.