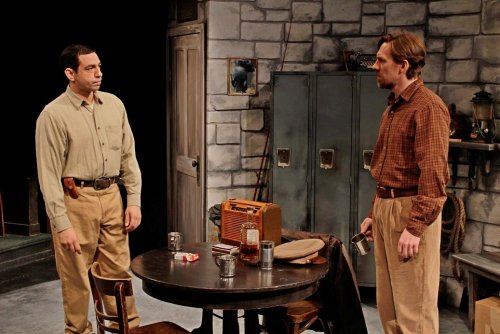 However, in London during the Blitz during the summer of 1940, the play became a wartime smash heralded by both critics and politicians alike. After the war, the play swept Europe with productions in Vienna, Prague, Budapest and Berlin where it spoke to war-weary survivors. Aside from a fondly remembered film version with stars of the London stage production Michael Redgrave, Fredrick Valk and Barbara Mullen as well as James Mason and Lili Palmer, the play has gone into a deep eclipse.

It is not difficult to see what attracted Metropolitan Playhouse to Ardrey’s drama: its message that one cannot shut one’s self off from the problems of the world as the America First movement wants to do is very timely once again as in the 1930’s, and the refugees who appear in the play’s second act and speak of their hopes and dreams in the new land are a stinging rebuke to those who would shut the golden doors to foreigners seeking asylum in the United States in our own time. 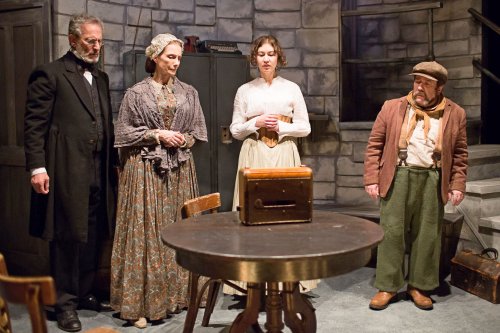 The problem with the play, at least in Alex Roe’s production, is that it is neither very good nor very convincing. It is mostly all talk and no action and the characters are simply mouthpieces for various lifestyles and points of view. The play’s first act is a debate between two committed men, lifelong friends, in which neither side gives an inch. One would not be criticized for wanting to leave after this talkfest but Roe has wisely dropped the intermission and combined it with Act Two which is much more lively, making for a long first part. The sudden conversion in the third and final act of the play’s hero, David Charleston, famed international reporter who has lost his faith in mankind and the future, is not very believable as well as it is not very well prepared for, representing a complete turnaround.

The play’s premise is the classic situation of the man of ideals who retires from the world to an ivory tower, here literally as the lighthouse keeper on a remote island in northern Lake Michigan where his only visitors are the monthly visits of his supervisor Coast Guard Inspector Flanning and whichever pilot that he takes with him. Charleston has seen the Spanish Civil War first hand and has attempted to awaken the world to the coming cataclysm in Europe but to no avail. Burying himself on his Thunder Rock Island, he hopes to sit out coming events.

However, in Act I his best friend from college, Streeter, now a Coast Guard pilot, tells him that he is quitting at the end of the week to go fly planes against the Japanese for China and tries to convince Charleston to come with him. However, Charleston warns him about the risk he takes and that he may not survive, but Streeter is adamant that he must attempt to make a difference. Inspector Flanning also has news for Charleston: he must take his compulsory leave when he returns in one month with supplies for his replacement. Although Charleston insists he does not want to return to civilization even for a vacation, Flanning warns him that he has no choice. 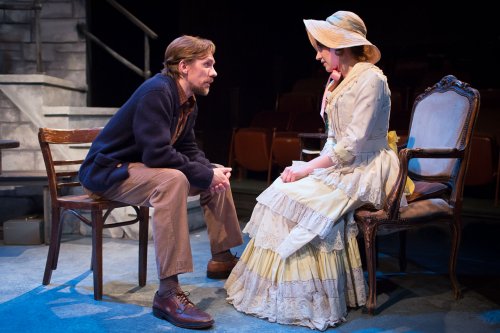 In the second act we find out how Charleston has been spending his time on Thunder Rock. Having found the log of the S.S. Land o’Lakes out of Buffalo going to Milwaukee which sank in 1849 not far from his current lighthouse, Charleston has peopled his mind with six of the members of the doomed voyage: Captain Joshua Stuart, Dr. Stefan Kurtz who had been kicked out of Vienna for experimenting with anesthetics, his wife Anne Marie and daughter Melanie, English suffragette Miss Kirby, and Birmingham working class potter Briggs whose unseen wife lies in childbirth upstairs in the lighthouse. They speak to Charleston of their unhappy lives in Europe and their dreams of a better future in America.

When Charleston finally tells his ghosts that they are all dead and figments of his imagination, they attempt to convince him to go back into the world to make it a better place using his own admission of the advances from 1849 to 1939. While Charleston argues that they don’t understand that the war the world is about to fight may be the last one (and this six years before the invention of the atomic bomb), they counter that progress always comes out of adversity. When Charleston at last meets his replacement, Cassidy who can’t wait to be left alone on the island is an even bigger pessimist than Charleston ever was.

As the hero David Charleston, Jed Peterson is rather bland where he is meant to be both charismatic and intellectual. Kelly Dean Cooper, a regular at Metropolitan Playhouse in recent years, is wry and ironic as his supervisor Inspector Flanning, though he may have been intended by the author to have more gravitas. Jamahl Garrison-Lowe’s Streeter, Charleston’s friend of long standing, impresses with his sincerity. As Charleston’s replacement, Thomas Vorsteg as Cassidy attempts to make stolidity into a characterization. 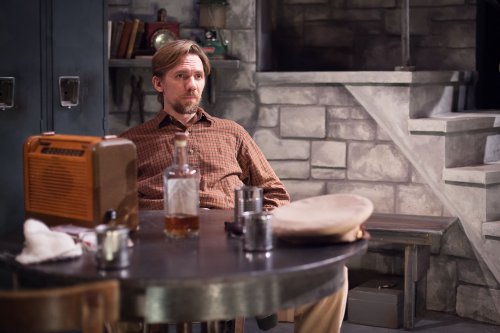 The ghostly characters do better with their stereotyped roles: Howard Pinhasik as Viennese Dr. Kurtz, is intense and questioning. David Murray Jaffe in the small role of Captain Stuart exudes an air of authority. Susanna Frazer and Hannah Sharafian as Mrs. Kurtz and their daughter Melanie give layered performances that have an emotional component. Teresa Kelsey as the English radical Miss Kirby, on the other hand, is a bit too one note, while Linus Gelber’s working class Briggs is one dimensional.

The realistic set by Vincent Gunn fails to give the actors much room to maneuver as they are trapped by a round table in the middle of the lighthouse’s main interior, while Christopher Weston’s lighting draws attention to itself in its sudden dawn and dusk effects. While Sidney Fortner’s costumes for the two time periods are perfectly suitable, she might have given the ghostly characters something to suggest that they are other worldly which the lighting also fails to do. However, Michael Hardart’s sound design and John Long’s fight choreography cannot be faulted.

Due to its World War II reputation and recent obscurity, Robert Ardrey’s rarely seen Thunder Rock is a worthy play for rediscovery. It is also very timely in its themes of isolationism and immigration. Unfortunately, the Metropolitan Playhouse production does not make a very good case for its enduring importance. Ironically, it now seems very dated in its structure and development while its message is as important as ever. However, the play needs to be seen for historical reasons and as playwright, screenwriter and anthropologist Ardrey is no longer a household name, it may not be offered soon again.