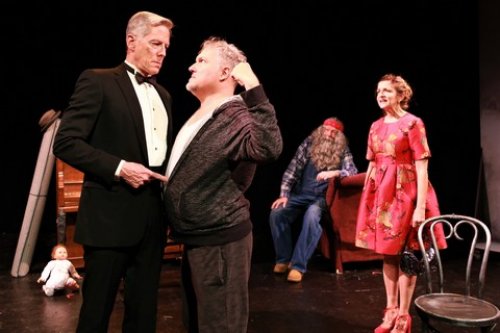 Attending an evening of one-act plays is a bit like going out for dim sum. You don’t want to do it all the time, but sometimes it seems just right. If one playlet is not to your taste, you needn’t invest too much emotional energy in it. The next item on the bill may make a much better impression.

Dining with Ploetz at Theater for the New City consists of three short plays by writer, director and teacher Richard Ploetz. The program adds up to slightly under two hours’ running time (with one intermission). The plays are all billed as comedies, and—as the title implies—they all, to one degree or another, involve “dining.”  They are, however, quite diverse in terms of style and tone. The first and last of them (both of which the playwright directed) hold the audience’s attention fairly well. The middle piece, directed by Steven Hauck (who acts in the other two), is riveting.

First up is the absurd-ish “Goldfish,” about a feral child’s birthday party. The play contains a collection of outlandish characters who seem to have stepped out of a rollicking vintage sitcom. George (Christopher Borg), the girl’s adopted father, is a sweatpants-wearing Archie Bunker-type who nonetheless reads René Descartes and Sigmund Freud on the sly. His wife Cindy (Elizabeth A. Bell) is a plucky if harried waitress, a little reminiscent of Linda Lavin from Alice. One of the party guests, street poet Bill (Ryan Hilliard), wears dungarees, sports a long, bushy, crumb-catching beard, and comes off like a refugee from Hee Haw. He’s been picked up on the way to the party by two other attendees, a well-heeled, ridiculously overdressed couple: Rick (Steven Hauck) and Susan (Jamie Heinlein). 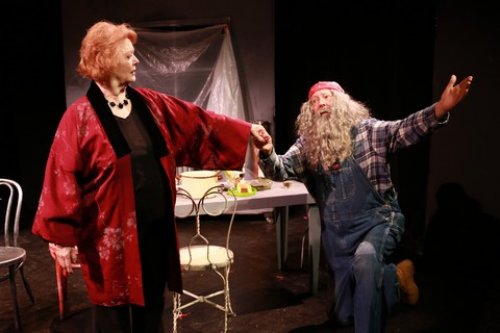 The party takes place in a dilapidated loft in a sparsely populated section of New York City called the “Rug District”—a neighborhood where Cindy and her listless friend Beth (the watchable Wynne Anders) were once workmates. There was once a real-life NYC rug-and-carpet district that waxed and waned in the area north of Madison Square Park, but exactly when and where this play is set is not made clear. In any event, very few guests have shown up for the bash, and for those who have, it’s a decidedly awkward affair. For one thing, the celebratory pea soup has nearly all been consumed by the time latecomers straggle in.

With a flavor reminiscent of works by Eugène Ionesco, “Goldfish” has some effectively quirky moments, but in the end doesn’t add up to anything particularly monumental. The main attraction, perhaps, is the birthday girl herself:  Sabrina. She’s played by the focused young Claudia Fabella, and she speaks nary a word, except when the playful Bill gets on his hands and knees so she can ride him like an avid bronco buster. 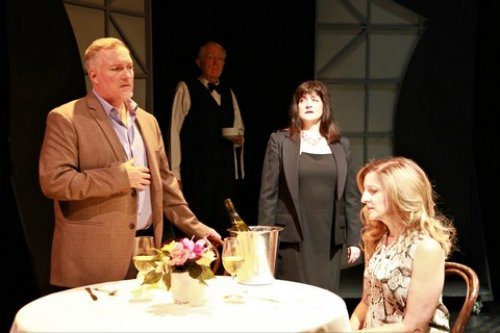 The middle play is a more realistic and serious piece, called “Memory Like a Pale Green Clock.” That’s a very Tennessee Williams sort of title, and this playlet packs a punch like some of Williams’s best shorter dramatic works.

A married couple, Robert (Borg) and Louise (Heinlein), are out for an evening together at an upscale Manhattan restaurant. It’s not quite yet their wedding anniversary, but Robert—a professor of literature—is feeling sentimental, and his extravagant mood is fueled by an excess of wine. Both he and Louise are feeling no pain even before they’ve ordered their meal. Robert spots a woman, Helen (Bell), across the room. He thinks he may know her but can’t quite place her. To Louise’s jealous annoyance, he keeps staring at her and wondering aloud who she is. Meanwhile, Helen, who has experienced a recent personal loss, is also growing tipsier by the minute.

Attending to both tables is a waiter of advanced age, Walter (Hilliard). He strives to maintain decorum and preserve his own professional detachment, but as those he serves become increasingly inebriated, his composure is put to the test. This situation could have been written, directed and played for farcical effect. Instead, it is presented in relative seriousness, and it manages to be quite suspenseful. One or another of the characters could do or say something at any moment that would destroy the delicate equilibrium in the room and cast everyone into chaos. There are moments in the play that will cause you to laugh, cringe and perhaps gasp. Ploetz captures the mood of loneliness tinged by faint hope that can be found in Matthew Arnold’s poem “Dover Beach,” from which Robert spouts lines at one point. In sum, it’s a tightly constructed and beautifully sad little play, elegantly directed by Hauck.

Part of the success of the piece can be attributed to the work of the actors. All four do a fine job here, but Borg delivers an especially memorable turn (not to mention one of the most believable enactments of drunkenness onstage that you’ll ever see). That Borg, in a play this short, can create a character with such depth—hinting at all sorts of hidden aggression, along with some traces of raw menace—is impressive indeed. 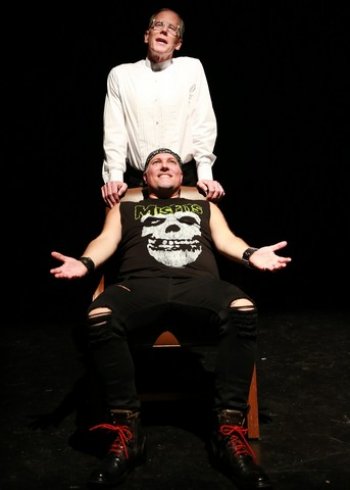 Borg turns up in the third and final offering, the two-hander “Bone Appetite.” It’s a macabre play depicting a blind date between Matthew (Hauck), a food connoisseur with an ostentatious manner and some unusual appetites, and Arny (Borg), a working-class younger guy who hopes to play a special role in a banquet Matthew is planning. Ploetz’s dialogue here is rich, and the situation is creepily engrossing. The play has instances of frisson, but it lacks little moments of surprise that make “Pale Green Clock” so wonderful. It seems a bit like a dark, peculiarly erudite Saturday Night Live sketch—and, like many an SNL sketch, its denouement sort of fizzles. Both actors, however, are excellent.

Tending to the needs of three separate plays presented on the same stage within the span of a couple of hours presents a special challenge for a design team. Here scenic designer Mark Marcante and lighting designer Alex Bartenieff make use of the full playing space for “Goldfish.” Then, after intermission, they work within a smaller central area for the other two plays. Their contributions are practical and solid. No costume designer is credited in the program, but someone has given some thought to the garments chosen, especially the rather antic ones in “Goldfish.”

Running time: 110 minutes with one intermission