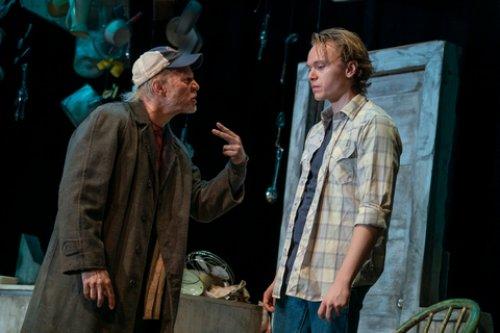 Why the gifted Terry Kinney, of all directors, turned Sam Shepard’s seminal work, Curse of the Starving Class into Tobacco Road (Jack Kirkland, 1933) is a mystery.  This production at the Signature Theatre doesn’t even rise to the level of that tawdry period shocker, a huge hit which ran for over 3,000 performances.

Kinney’s Curse is a sit-com version of Tobacco Road.  All the actors shout at each other and shamelessly play to the audience, an interpretation that drains the play of all subtlety and meaning.

Curse of the Starving Class and Tobacco Road do share certain superficial similarities:  casts of poor white working class people struggling to survive one crisis after another; rural settings; uncontainable passions; and pipe dreams that never come to fruition.

Shepard used the dire condition of the Tate family as a metaphor as opposed to the tawdriness of Tobacco Road which was a hit precisely because it was tawdry.  In Curse the struggles of the Tate family are colorful, sometimes titillating, but complex and involving.

The original production of Curse of the Starving Class in 1977 was a shocker even for a time when permissiveness prevailed.  Kinney seems to have decided that the play Shepard wrote isn’t sufficiently meaningful or effective, so he decided to exaggerate everything, beginning with the scenery—a large, dumpy, shopworn kitchen—literally breaking apart accompanied by explosive noises before the play begins.  The set is left hanging in pieces as the characters go about their business. 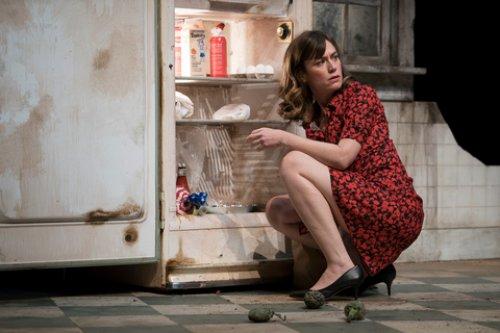 Could there be a more heavy-handed metaphor for the fracturing of a rural family? (The excellently detailed set is by Julian Crouch.) This choice is a ham-fisted gimmick not in the script.

After the room is ripped apart—totally unacknowledged by the characters inhabiting it—a glum twenty-something Wesley Tate (Gilles Geary in a gloweringly solemn performance) is collecting the splintered remains of the door his drunken father, Weston, demolished the night before in a violent drunken fit.  Wesley, despite the air of gloom surrounding him, wants to keep the homestead a going concern.  That is his pipe dream.

He piles the pieces of wood onto a wheelbarrow as Ella, his mother (a too young, but quietly powerful Maggie Siff) makes breakfast.  The only problem is that the cupboard and ancient refrigerator are bare so she has to improvise, all the while reprimanding Wesley.  She pictures herself selling the house and land and fulfilling all her desires for travel and belonging in the larger world.

Young Emma, Wesley’s sister (Lizzy DeClement, awkward, hyperactive and shrill) has her own pipe dreams, some small, like winning a 4-H competition and some large, like leaving when she’s old enough; but even her 4-H fantasy is aborted by the use of the show chicken she raised cooked without her knowledge for a quick meal.  She gets herself in trouble with the law by Act Two and quickly learns that crime pays.

Weston, the patriarch (David Warshofsky in the steadiest performance of the evening) finally wanders into the fray to reveal that he, like his wife, wants to sell the estate.  The trouble is that both his plan and his wife’s are flawed and come up against each other quite dramatically. 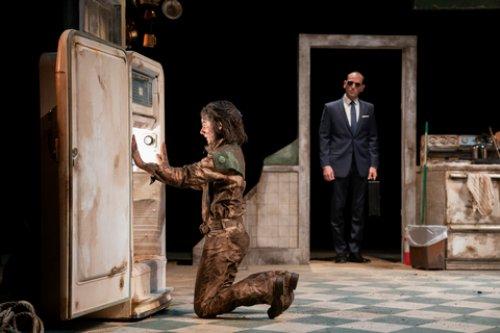 By the end, all the life is drained from mother and son.

Sarah J. Holden’s costumes are perfect for these characters and Natasha Katz’s lighting makes gloom another character in the play.

The only reason to see this production of Shepard’s Curse of the Starving Class is if you are a Shepard completist and just have to see this one.