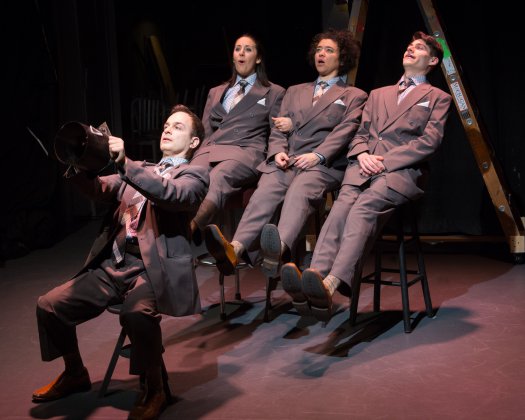 Four performers–two men and two women–are wearing the same double-breasted brown suit, same tan shoes, same plaid tie, and same patterned shirt. They are all playing the same immigrant, Youssef, who came “to London to find my fortune,” and became a “successful doctor.” But from the very beginning, they’re stepping over each other’s lines, and sometimes giving conflicting information. The week before he left his unidentified (but clearly Arabic) country, Youssef received a letter from the hospital where he worked, “advising me that, following budgetary cutbacks” he had been “fired,” according to one manifestation of his character. He had “not been fired,” according to another.

The same four performers also become the many other figures that Youssef encounters in the American premiere of Angry Young Man, a British play by Ben Woolf. These include Youssef’s new friend Patrick, who is “your traditional English radical” that goes by different names, including Abdul, Youssef, Mahmoud. “I just call him ‘The Immigrant,’” adds Youssef, who may as well be describing himself. But the four of them also become, briefly and intermittently, the park attendant in Hyde Park, where Youssef meets Patrick for the first time, not to mention “a hunched old woman beneath a tartan blanket” on a park bench, a duck in the nearby pond, a “portrait upon the wall,” and countless other characters, colorfully realized with madcap gestures.

The confusion and the rapid pace of the production pretty much engulf–and finally overwhelm–the extremely complicated story of Angry Young Man. The performers, on the other hand, make this something of a gem of a small, Off Broadway offering, from Urban Stages. The wayward plot eventually takes Youssef to a disco with Patrick, and with Patrick’s girlfriend Alison, where Youssef is confronted by a skin-head, Terry, whom he accidentally kills. “The other customers were almost exclusively male,” says Youssef. “They seemed for the most part to be dressed as Patrick: long-hair, T-shirts, scruffy blue jeans.”

What may sometimes sound like a playwright’s stage directions is rather part of the dialogue: not only describing the old “crone” on that park bench, as spelled out above, but also, for example, “He said, charmingly.” Thus says Youssef, referring to Patrick, who just introduced himself to his new friend by saying his own name. Or consider, “And with that coquettish quip, Alison sashayed away,” as the actor portraying Alison, proceeds to do just that, while another one delivers the line.

The relentless use of the narrative techniques of Dashiell Hammett and other hard-boiled detective writers of the mid-20th century (including Raymond Chandler and James M. Cain) rends the somewhat complicated story of Angry Young Man secondary to the way it’s told. But fortunately, this puts both the play and us in relatively good shape, since the four young actors are so very good at what they do: They have the verbal and physical dexterity to enact everything from the dead-on sounds of a milkman’s truck chugging along or of walking on gravel, to that Duck in the pond or the statue of a “short, fat, urinating cherub” fountain. (“Dank water spurt weakly into the bowl from his puny organ,” says one of the performers.) What’s more, they achieve all this with little more than four stools, a standing, double ladder, a single microphone, a stage-light and a flashlight, and a spray-bottle of water for some London fog and for that pissing fountain. 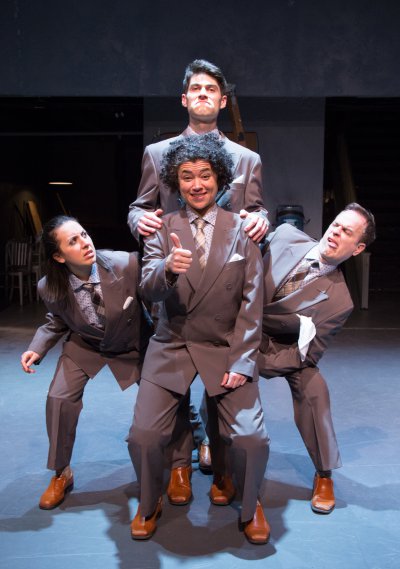 As directed with an ingenious eye and impeccable timing by Stephen Hamilton–who becomes as much a part of the choreographed action, it would appear, as the performers–the non-stop pranks and monkeyshines bring to mind the fast-paced antics of the Three Stooges or Laurel and Hardy. The first-rate performers, on the other hand, evoke the young Bill Irwin, who established his genius with The Regard of Flight, an incredible 35 years ago.

The relatively small and squat Christopher Daftsios is particularly deft at turning his body into the most unexpected of objects, including a mounted stag on a wall–or was it hanging from a chandelier?–not to mention a dog and that cherubic fountain. And the frizzy-haired Rami Margron reproduced especially fine sound effects as a screeching car, with apparently nothing more than her vocal chords and a microphone.

Equally deserving of honorable mention are the two remaining actors, Nazli Sarpkaya and Max Samuels. (Samuels plays the fetching Alison, merely by having his shirt ripped open, exposing his chest hairs, and “sashaying” so graciously, as described in the script–or gracelesssly, as the case may be.) The four of them cavort with seemingly carefree, but ultimately extremely controlled, abandon. As with the Three Stooges and other great comedic clowns, they make every movement appear spontaneous and almost accidental when each must be perfectly coordinated and timed–to avoid any real physical accidents from occurring.

Given so many visual and audio effects, it’s hardly surprising that the program includes credits for Douglas Mills as “technical director” and Dan Renkin as “fight director.” David M. Lawson is also to be applauded for his superb sound designs, as is Sebastian Paczynski for the lighting design. Emphasizing just how technical the production of Angry Young Man is, there’s even a credit for Sydney Schatz as “prop master” and Sam Lilja as “dialect coach”–all on the front page.

Though it’s ostensibly about racism, and what right-wingers consider “that failed social experiment: multi-culti-ularism,” Angry Young Man is, instead, a tour-de-force for four skilled performers to strut their stuff in stunning ways. And boy, do they.