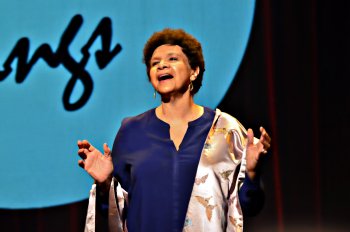 Trezana Beverley’s keenly observant, warm biographical musical, Mabel Madness: The Life of Mabel Mercer is not only good theater, but also a means for the many people who, sadly, know little about this extremely influential singer to get acquainted with her.  She was known, as she says in this show, for finding “the story in each song.”

Mabel Madness takes place in 1983 when Mercer was unsure where her life and career were going.  Rock and Roll seemed to have superseded her world of classic theater and saloon songs.  The world of the fancy cabaret was slowly coming to an end.

She is warily awaiting a meeting with her manager, Donald Smith, fearing that she will be dropped.  In the course of raiding her theatrical trunks to try to find just the right outfit to impress him, she muses on her life’s ups and downs.

Dressed in Gail Cooper-Hecht’s comfortable outfits—very much like the ones Mercer actually wore—Ms. Beverley tells the story of Mercer’s life as a biracial child in England, abandoned by her mother who barely acknowledged her daughter’s existence, let alone her achievements.

This lead to Mabel’s claim that all her life her audience was her family, along with the many friends she made along the way, most particularly Bricktop, an audacious, red-headed cabaret owner in Paris with whom Mercer partnered quite successfully until World War Two threatened.  Leaving a fairly colorblind Paris for the segregated United States was a shock, but she managed to carve out a career here with acolytes like Billy Holliday, Mel Tormé and, above all, Frank Sinatra clamoring to hear her.

Raised by her mother’s relations, she was sent to a Catholic school where Sister Frances mentored her despite the fact that she was, in that era’s parlance, a mulatto.  She took her (Black) father’s name, Mercer, to distance herself from her mother’s clan and moved to Paris where she made her name. 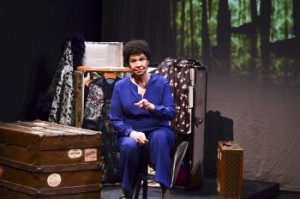 Along the way she met the songwriters whose work she illuminated.  During Mabel Madness, Ms. Beverley sings “Can’t Help Lovin’ That Man of Mine” (Kern/Hammerstein), “Down in the Dumps on the Ninetieth Floor” (Porter), “Summertime” (The Gershwins), amongst others.  She uncannily finds Mercer’s style, sounding surprisingly like Mercer in her speak-singing period which depended mostly on exquisite timing, understanding the lyrics and hitting the few notes still within her power.  She catches Mercer’s regal, yet still down to earth, quality, too.

Throughout the show, photos flash on the back curtain – thanks to Nicholas Blake Guldner’s video design- showing the people and places she knew in her long life.

The simple, but evocative set was by Tabitha Pease who placed the show in Mercer’s comfortable sitting room complete with a lovely palm tree and an oriental rug.

Ms. Beverley only barely touches on Mercer’s romantic life, which gives a slightly incomplete picture of her life.  Perhaps, romance wasn’t a great concern for this artist.  She certainly didn’t stint on all the barriers she had to overcome and all her hard work to achieve her mythical status.

If you haven’t guessed yet, she wasn’t dropped by Smith whose visit had a much happier outcome.  (Mr. Smith’s Mabel Mercer Foundation celebrates cabaret each fall with a festival of songs performed by all the topnotch cabaret artists in the world.)

Ms. Beverley is co-directed by Frances Hill and Peter Napolitano who allow for a natural flow, with music direction by Tuffus Zimbabwe.

Mabel Madness: The Life of Mabel Mercer (extended through April 10, 2016)

Running time:  70 minutes with no intermission