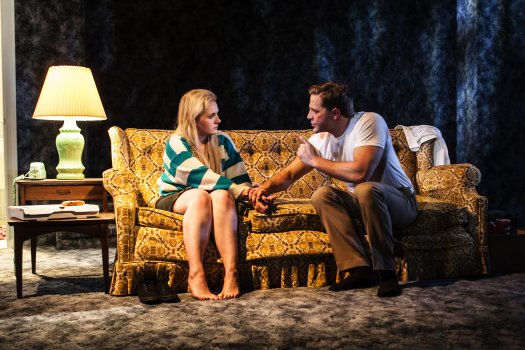 Unpleasant and trite, two 14- year-old girls’ romantic preoccupations with two men are tediously depicted in All the Fine Boys.  It features a ghastly simulated sex scene, and its violent resolution is so predictable that it’s only a matter of when it will happen.

Playwright Erica Schmidt has a minor aptitude for believably snappy dialogue, but not much else.  Her tired scenario is astonishingly familiar and offers no fresh insights.  That adolescence is tough is about all there is.  That territory has been mined in John Hughes’ films and numerous television shows. There was also the 1985 movie Smooth Talk, starring Laura Dern and Treat Williams that was based on a Joyce Carol Oates short story.

The play is set in suburban South Carolina in the late 1980’s.  We know this because of the classic period pop songs that blare during the frequent scene transitions.  There’s a lot of R.E.M.

The opening scene has Emily in the furnished basement of her good friend Jenny’s house for another sleepover.  Their innocuous chitchat is about the lack of snacks and which slasher flick to watch from the pile of rented VHS tapes.  We also learn that Emily is attracted to the high school senior Adam.  He is a cool, sexually active poet, and plays a Smiths’ song on his guitar.  Jenny is attracted to the handsome, 28-year-old Joseph who goes to her church. 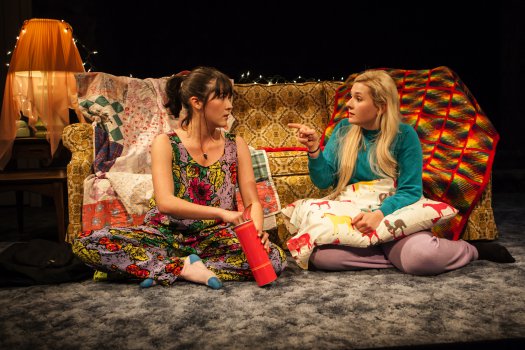 The rest of the play consists of mostly alternating scenes between the two girls together with each of the two men.  The contrasts of the couples are explored through their differing sensibilities, maturity and behavior.

Schmidt is also the director and her staging is slackly straightforward. Everything takes place on scenic designer Amy Rubin’s carpet-heavy, and basically furnished set that serves as the basement as well as the two men’s residences.

One of the girls loses her virginity to the object of her desire.  Though the actors are clothed, Schmidt presents this explicitly. The couple is on the couch and there’s realistic pelvic thrusting.  Yes, the point is to show a 14-year-old girl’s fanciful view of sex versus reality, but there are less unsettling ways to achieve this.   The play grinds on to its long foreseen conclusion.

The strong cast makes the most of their derivative roles.  Abigail Breslin is Jenny, Isabelle Fuhrman is Emily, Joe Tippett is Joseph and Alex Wolff is Adam.  Ms. Breslin particularly distinguishes herself due to fulfilling the character’s emotional excesses.  She and Ms. Fuhrman are obviously not 14 years old, but their engaging performances supersede this. 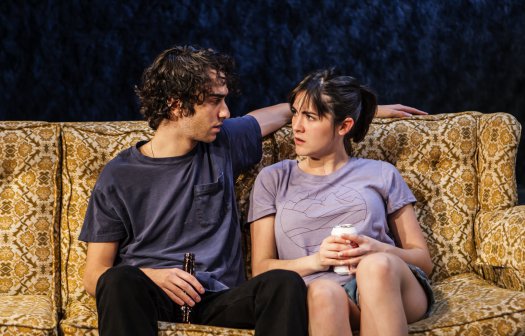 Jeff Croiter’s lighting design proficiently conveys the shifting actions and locations on the unit set with its rapid dimming and bursts of brightness.  The frequent musical clips are suitably balanced by the sound design of Bart Fasbender.

All the Fine Boys is one of those negligible works that while watching it inspires rhetorical questions such as “Why am I watching this?,” “Why would someone write this?” and “Why would a theater company put this on?”