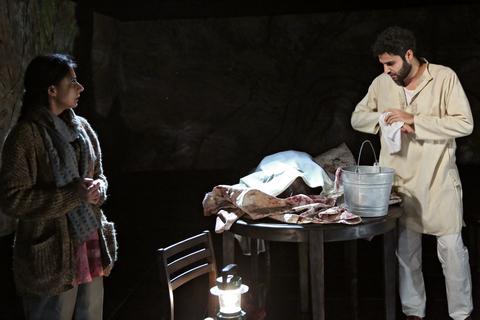 Mahira Kakkar and Babek Tafti in a scene from “Against the Hillside” at Ensemble Studio Theatre (Photo credit: Gerry Goodstein)

In Nevada in 2012, we meet U.S. Air Force pilot Matt. He is a pleasant man in his 30’s who is part of the RPA (Remotely Piloted Aircraft System) division. He monitors surveillance footage from drones in rural Pakistan. His pragmatic wife Erin is pregnant. She and his superior, the jovial Jared, and his younger fellow pilot Anthony grow increasingly concerned as Matt becomes emotionally fixated on the people he’s observing from afar.

In South Waziristan, a mountainous region of northwest Pakistan, we meet the amiable shopkeeper Sayid who is in his 30’s.  He has a loving relationship with his wife Reem and they have a newborn son. As U.S. bombings in the area increase there’s tensions between the couple. Reem wants them to relocate to a city where she feels they will be safer.  Sayid wants to stay put out of loyalty to his family of uncles and cousins. They’re represented by the paternal Farid and his son Ahmed.

The play shifts back and forth between these locales over six wooden scenes. The final one is initially confusing as it takes place 40 years into the future and it makes for a weak conclusion to an already unsatisfying play.

Matt’s situation could be depicted as a psychological character study of a spy consumed with his subjects as in the acclaimed 2006 German film The Lives of Others.  The eventful plight of the Pakistani family has dramatic possibilities that are sketchily presented.  Ms. Khoury hasn’t fully developed either strand and so Against the Hillside’s stilted scenes play out superficially with scant impact. Khoury’s dialogue is straightforward and adequate. 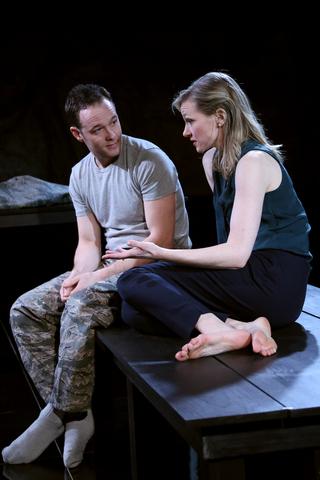 Jack Mikesell and Caroline Hewitt in a scene from “Against the Hillside” at Ensemble Studio Theatre (Photo credit: Gerry Goodstein)

There is however one beautiful sequence that is well written and realized. It incites the reaction, “Ah! This is the play!”

After his wife has left with their son and his cousin Ahmed, the dejected Sayid abandons his shop to become a replacement teacher.  The local school has been shuttered because teachers are afraid that it will be bombed.  Sayid begins going to the school in case students turn up.  His uncle is appalled as the family needs income to pay for plastic surgery for a relative, little girl who was maimed in an attack and they argue about Sayid spending money for a fan for the school.  Sayid’s first student is Moussa, a 14-year-old boy who wants to be an engineer but is poor at math so they do long division problems.

The production is not helped by William Carden’s heavy-handed direction.  Scene transitions are punctuated by sound designer and composer Shane Rettig’s blaring, pulsing and overwhelming original electronic music. In near darkness, stage hands wearing black appear to rearrange furniture and set props.  This all becomes formulaic and distracting.

Carden’s physical staging is rudimentary and the actions flow weakly. Most unnerving is that Mr. Carden has the actors speaking rapidly and being overly emphatic for much of the time and this sets an artificial tone. 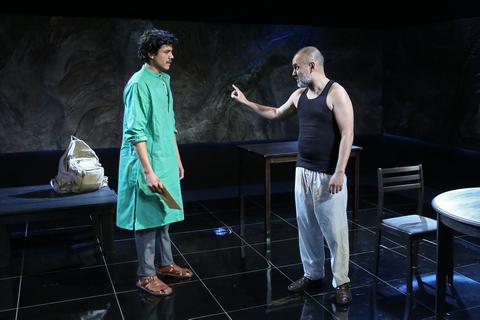 Mohit Gautam and Rajesh Bose in a scene from “Against the Hillside” at Ensemble Studio Theatre (Photo credit: Gerry Goodstein)

Only Rajesh Bose as Farid and a character in the future is able to achieve a full-fledged and compelling performance.  With his charisma and subtle intensity Mr. Bose transcends and elevates the material.

Though scenic designer Jason Simms’ furnishings are cumbersome to reconfigure, he does provide a cool atmospheric backdrop that wraps around the walls of the two-sided playing area.  It’s predominantly gray with slashes of beige resembling carved rock that perfectly conveys the barren and violent landscape.

Against the Hillside contains some effective portions but these are too few to transform it into a successful theatrical work.