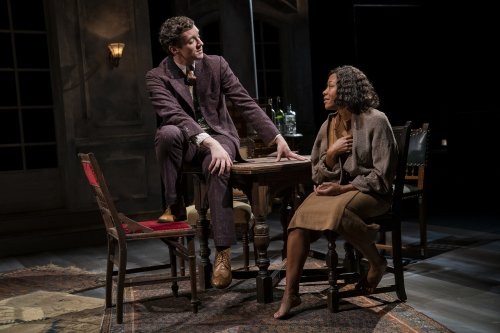 Maddeningly alternating between being an absorbing historical drama and a grating exercise in self-indulgence,  A Bright Room Called Day is author Tony Kushner’s reimagining of his 1985 first play. “It never worked” states a character regarding the play. It still doesn’t, but parts of it are entrancing. In contrast to his gargantuan two-part opus, Angels in America, this runs a tolerable two hours and 45 minutes including an intermission.

It’s Berlin 1932 and we’re at the grand apartment of Agnes, a minor German screen actress. There, she maintains a salon of a cross section of Bohemian types who all get caught up in the era’s firestorm. Projection designer Lucy Mackinnon’s crisp textual black and white imagery of dates and events imparting the rapid rise of Adolph Hitler and his Nazi party is shown above the living room’s back wall. There’s suspenseful potential here and Mr. Kushner creates compelling and articulate characters. Not content to merely craft a relatively conventional solid play that holds attention, Kushner resorts to his characteristic overblown grandiosity. 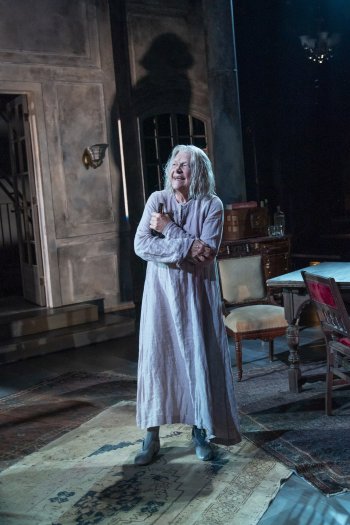 Smashing the fourth wall is a character who represents Kushner, sidetracking the actual plot. He speaks directly to the audience, explaining the work’s history. It was originally meant to draw parallels between the presidency of Ronald Reagan and Hitler. Now, it can apply to Donald Trump. That this meta-interloper is played by the glorious New York City stage stalwart Jonathan Hadary is slightly mitigating. Equally extraneous is the captivating Crystal Lucas-Perry as a now excised interlocutor figure from the original work. The fascinating Berlin stories are also interrupted by the fiery and smoky arrival of the Devil, played as an Abe Vigoda-style black-suited curmudgeon by Mark Margolis. Then there is the awesome, long white-haired Estelle Parsons wearing a white nightgown popping in and out as a surreal seer.

Fortunately, director Oskar Eustis is overall successful at joining all of these jagged strands into a coherent and lively presentation with his masterful staging, inspired use of the prime technical elements and guiding the cast’s zesty performances. 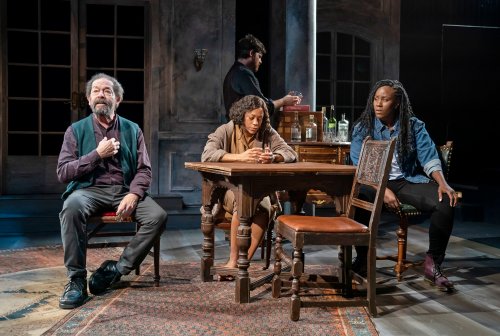 A Cubist painting, pillars, a chaise lounge and other fine vintage furnishings are the tools employed in strategic unison by scenic designer David Rockwell for his fabulous set that totally captures the time and place. John Torres’ enriching lighting design smoothly depicts a variety of realistic and fantastical dimensions. Sound designer Bray Poor achieves a euphony out of crashing classical music and ominous effects. Co-costume designers Susan Hilferty and Sarita Fellows’ sensational array of period and contemporary garments vividly personalize each of the characters, as does Tom Watson’s lavish wig, hair, and makeup designs.

While often frustrating, A Bright Room Called Day does have its virtues. The cryptic title is derived from Kushner’s comic mishearing of the name of Agnes de Mille’s ballet, “A Bridegroom Called Death.”