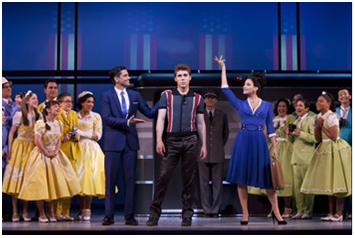 When the first Charles Strouse-Lee Adams collaboration, Bye Bye Birdie, opened in 1960, it was the first rock n’ roll musical to hit Broadway, making standards out of “Put On a Happy Face” and “A Lot of Livin’ To Do.” This satire inspired by the uproar that occurred when teen idol Elvis Presley was drafted became an instant hit. It went on to win the 1961 Tony Award for Best Musical and became a staple of community theatres and high schools. Strangely enough, it has never had a Broadway revival until now.

From the earthbound and misconceived revival being presented by the Roundabout Theatre Company at the newly renovated Henry Miller’s Theatre, maybe it would have been better to have left memories of the 1960 production intact. Except for Jayne Houdyshell who is delightful as Mrs. Mae Peterson, the hero’s overbearing mother, Robert Longbottom’s production is deficient in every possible category, from casting, to musical staging, to choreography, to design, to musical direction. There has been some tinkering of the original show with the addition of the title song written for the film version and the elimination of the Shriners’ Ballet, but to little avail. No one on stage looks like they are having any fun in what is essentially a light comedy.

This classic American musical features leads John Stamos, Gina Gershon and Bill Irwin who are not really singers or dancers but performers famous for other forms of entertainment. Longbottom’s choreography and musical staging is busy, busy, busy, but not joyful or inspired. As conducted by David Holcenberg, Strouse’s bouncy score is played at too slow a pace, even with orchestrations by the legendary Jonathan Tunick. The comedy is played too broadly, and the love scenes are passionless. The set design by Andrew Jackness, mostly traveling screens which endlessly regroup, has the tacky air of a second-rate touring production, like the entire show. Gregg Barnes’ color–coordinated pastel costumes for the chorus do not in any way suggest the 1960 time period. And worst still, newcomer Nolan Gerard Funk as Conrad Birdie, the Elvis stand-in, who should be sexy enough to make all the girls swoon looks bored throughout the proceedings.

Stamos and Gershon have both previously appeared on Broadway in Cabaret, but that is a story of intentionally second-rate performers with unrealistic dreams. Here Stamos plays music publisher and manager Albert Peterson who keeps putting off his secretary and not-quite fiancée Rose Alvarez (played by Gershon) due to the objections of his possessive and prejudiced mother Mae (Houdyshell), and the fact that he owes Birdie, the rock star he manages, $50,000. Stamos is rather wooden in his scenes with Gershon, rather than stand-offish, which is not the same thing. It is not that Peterson is not attracted to the attractive and sexy Rose but that his mother’s objections make him avoid actually proposing to her. As a result of the lack of on-stage chemistry, Gershon who admirably looks and sounds the part is not able to connect until the end of the evening when she lets loose in her number, “Spanish Rose.” Her impeccable comic timing in last season’s hilarious Boeing-Boeing from the same era is a reminder of her talents, but nowhere in evidence.

The late Michael Stewart’s book concerns the problems that arise when Conrad Birdie is drafted. Rose comes up with the idea that Albert will write a song to be called “One Last Kiss” for Birdie to sing to a randomly selected member of his fan club before he leaves for the army with an actually documented kiss. When the song and kiss are chosen to be presented live on The Ed Sullivan Show this is suddenly big news. However the girl chosen, Kim MacAfee of Sweet Apple, Ohio, has been newly pinned by her boy friend Hugo Peabody who decided (with the help of the by-now incensed Rose) to keep Conrad from planting that kiss on national television. A great deal of hijinks results before all is resolved to everyone’s satisfaction – except Albert’s mother Mae.

As Kim’s old-fashioned, traditional father, Irwin goes out for mugging and an overabundance of slapstick which is not only unfunny, but entirely unnecessary. The material is farcical enough without all of the added gags. In the role created by comic Paul Lynde, Irwin doesn’t know where to stop with his brand of twitchy physical comedy. Although Allie Trimm looks believable as the 15 year old Kim, she is a mechanical, rather than spontaneous teenager. Making his Broadway debut, Funk can admirably grind his pelvis, but when it comes to exuding the sex appeal that sweeps the women off their feet, he lacks both energy and intensity.

As the bigoted Mae who will do anything to keep her son from marrying his Hispanic girl friend of many years, Houdyshell could give lessons to the others on how to deliver this kind of comedy. She registers all of her laughs plus some lines to which she gives her own special spin. Without her sparkle, the show would be a complete dud. What is even more remarkable is that she is able to do this with a role that is both politically incorrect and unsympathetic today. More power to her!

The famous production numbers, “The Telephone Hour” and “A Lot of Livin’ to Do” fall entirely flat in Longbottom’s staging. In the first, in which the members of the teenage chorus call each other in the evening to catch up on the latest gossip, the design and staging makes it appear that they are all in telephone booths which misses the whole point of the era when teens first had their own phone extensions. Adams’ witty lyrics to “Kids” sung by the MacAfee family (including consummate musical comedy performer Dee Hoty as Irwin’s wife) fails to register.

Some will say that Bye Bye Birdie is dated. Of course, any comedy satirizing the attitudes of 1960 is going to be a period piece in 2009. Remember the film versions from 1963 and 1995, the award winning original Broadway production, the Tommy Tune national tour in the 1990’s, and the countless revivals by everyone’s high school drama society? Bye Bye Birdie, which is an authentic piece of Americana, deserves a revival that allows the comedy to fly and the music to soar.