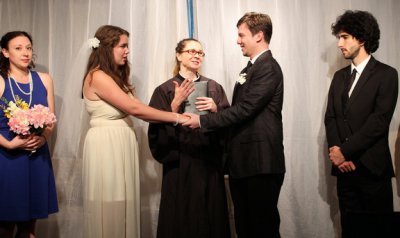 The event of a wedding has often been central to the plot of plays, musicals, and movies. Sometimes the bride gets cold feet. Other times, the groom is running late and nearly misses the wedding. In Off White, the new play by Khai Dattoli, neither of these is the case. When the bride-to-be Rose (Mary Baynard), finally makes her way down the aisle, the hiccup in this picture-perfect wedding is revealed: for some mysterious reason, Rose does not recognize her fiancé—cannot remember getting engaged, and doesn’t remember ever loving the man standing beside her on the altar.

It is this turn of fates that drives Off White. Featuring all the usual suspects of a wedding party, nothing is as it seems. In a mad dash to conceal the truth from Dan (Mark Kopas), the newlywed groom, Rose enlists the help of the bridesmaids and groomsmen to unravel the mystery of her lapse in memory and get to the bottom of the predicament. The introduction of these supporting characters is the bread and butter of the production. Though most of the characters are thinly constructed and are based on a single “gag” or trait, this is a light-hearted comedy and these stereotypes come with the territory.

A highlight of the script is the bridal party comprised of Rose’s three sisters. With them as different in personality as possible, the constant bickering and arguing that is so common between siblings is a welcome addition to the story. Played by Mariel Matero, Rose’s outrageously pregnant sister Beth is a highlight of any scene in which she is a part. Matero’s counterpart/husband Carter (Joseph Blute) also provides one of the more grounded performances of the cast, and together these two account for many moments of humor.

Also providing a strong comedic performance is Brian Esposito as Rose’s youngest and only brother. Playing an eighteen year old who hasn’t had much experience with alcohol, Esposito’s Peter progressively becomes more intoxicated with each passing scene and his ensuing sloppiness is very entertaining.

Directed by Megan Magee, the problem with Off White’s script is it’s inconsistency of tone. Switching between dead-pan and farce far too frequently, many moments occur in which one wonders whether or not a laugh would be appropriate. In what amounts to a slightly abrupt finish that wraps up every story a little too cleanly, Off White features an enthusiastic cast of performers but is held back by the flaws in the script.

For tickets, visit http://www.theatre68.com or purchase at the door

Running time: One hour and 30 minutes with no intermission