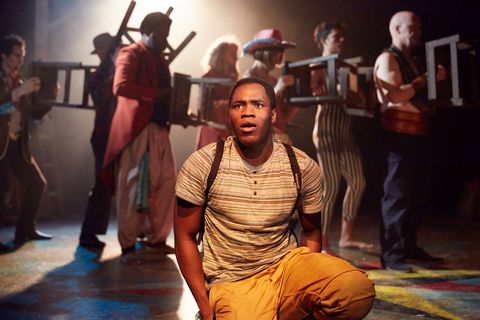 Shadow puppetry, audience participation, actors as animals, talking lions, ladders as boats, a circus with a trapeze artist and a bearded lady, a live drums and percussion score, a hot air balloon, and storytelling in the style of Harry Potter. Complicite, Britian’s acclaimed collaborative theater company, has devised its first family-oriented production, Lionboy, based on the best-selling young adult trilogy by Zizou Corder, and the exciting results of this U.S. premiere are now on display at The New Victory Theater. This engrossing storytelling experience, suitable for all ages, combines science fiction, fantasy, economics, science and a futuristic dystopia to tell a fascinating adventure tale using all of the techniques of storytelling by a company of eight versatile actors.

This faithful stage adaptation by Marcelo Dos Santos telescopes the action of the three novels by Zizou Corder, the pen name of Louisa Young and her then teenage daughter Isabel Adomakoh Young: Lionboy (2003), Lionboy: The Chase (2004), and Lionboy: The Truth (2006). The stage adaptation is narrated by its hero, young Charlie Ashanti played by adult actor Martins Imhangbe, as well as other characters. The story begins in an England of the future just a little different from our civilization: phones are powered by the sun, cars are banned because of their fumes, and companies are more powerful than countries, the biggest being The Corporacy, a sinister pharmaceuticals firm. Charlie is a typical schoolboy except that he can speak cat after accidentally exchanging blood with a leopard cub and that he is extremely resourceful, having as his parents Dr. Aneba Ashanti, an African scientist, and Dr. Magdalen Start Ashanti, a British scientist, both working on a cure for asthma.

When Charlie comes home to find that his parents have been kidnapped, he must travel to France, Italy and Morocco to find them. Along the way he is helped by local cats, circus lions, the bearded lady, King Boris of Bulgaria and Ninu, a talking chameleon. He travels by boat, train and hot air balloon. His actions are monitored by former schoolmate, the mercenary Rafi Sadler, as well as the menacing CEO of The Corporacy who has a particular interest in obtaining his parents and their research. The climax, a boxing match to the finish in the form of a verbal duel, is a tense confrontation as is Charlie’s imprisonment in their headquarters. With the help of his friends, mostly animals he has aided, Charlie triumphs over evil and those who are motivated only by greed. Lionboy is at the same time a cautionary tale, an adventure story and a science fiction chronicle of a world just one step removed from our own.

Under the inventive direction of Clive Mendus and James Yeatman, the cast is made up of eight actors of tremendous range of skills (including Mendus himself), with most of them playing several roles as well as members of the circus ensemble and manipulators of Jon Bausor and Jean Chan’s clever scenic design. Imhangbe is an engrossing storyteller as well as compelling actor, while Angel Lopez-Silva as the nasty Rafi and Mendus as the suave but sinister CEO of The Corporacy are tangible villains. Femi Elufowoju, Jr. embodies two contrasting characters, the cruel lion trainer Maccomo and Charlie’s remarkable father Aneba Ashanti. Victoria Gould appears as the benign bearded lady as well as Charlie’s loving mother Magdalen. 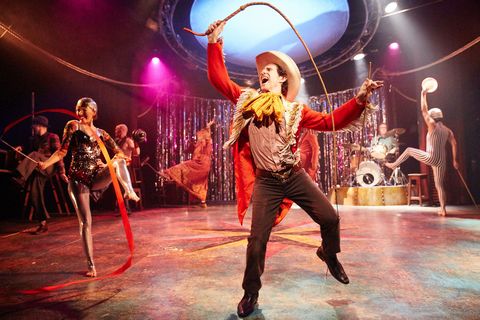 Eric Mallett is amusing as the mangy cat Sergei from the North of England and not Russia, despite his Slavic name. Lisa Kerr demonstrates her many skills as the trapeze artist Pirouette dressed in a tutu and later the chameleon Ninu with her remarkable linguistic abilities. Dan Milne runs the gamut from the helpful fisherman Mr. Ubsworth with his thick Irish accent, the terrifying Major Tib who runs the Circus to debonair and powerful King Boris of Bulgaria.

The cast could not create their magic without the aid of the production team. Most prominent is composer Stephen Hiscock who performs his score live on percussion and drums and occasionally enters the action. The lighting design which includes the shadow puppets lit behind a large round screen is the work of Tim Mascall (for the original 2013 British tour) and Christopher Nairne (the 2014 American production). The inventive design by Bausor and Chan uses the minimum of props on a round disc to quickly and cleverly create all of the needed locales required by Charlie’s journey as well as puppets for some of the special effects. Their colorful costuming includes street clothes for people of all ages and costumes for animals as well as a full complement of circus outfits. Mendus and Kasia Zaremba-Byrne are responsible for the movement for such elements as the humans as animals, the ringmaster and lion trainer and the sinister characters.

Although Lionboy has been created by Complicite as their first family production, the sophistication of the material, the cleverness of the staging, and the relevance of the themes make this suitable for adult theatergoers without children in tow. However, from the rapt attention of the children in the audience at the performance under review, Lionboy is a delight for theatergoers of all ages who enjoy innovative theatrical productions.