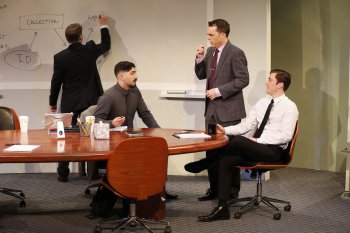 Ideation is an outrageous corporate satire set in a conference room where three team members, an executive and an intern are engaged in intrigue concerning the presentation of a fiendish project to an ominous CEO.  Paranoia and conspiratorial speculation pervade.

Taking place in real time, Aaron Loeb’s entertaining play is in the mode of Paddy Chayefsky’s Network with shades of The Blair Witch Project.  It also echoes the explosive style and resonant themes of psychological moral complexities that Yasmina Reza theatrically explored in her plays Art and God of Carnage.

The play was first presented in 2013 at the San Francisco Playhouse and is now making its New York premiere.   A great attribute of this production is that the original cast performs it.

Relatively unknown to New York City audiences, this company of highly gifted regional actors is able to inhabit their roles completely without the distraction of recognition.  Having been familiar with the material for quite awhile, they effortlessly toss off the sometimes dense dialogue with ease, and all create immensely rich true to life characterizations.

In a lime green skirt suit, the sleek blonde Carrie Paff authoritatively plays Hannah, the executive supervising the impending presentation.  With her cool, modulated voice and imposing physicality, Ms. Paff vividly conveys the sense of a woman under siege.

The animated Mark Anderson Phillips is fearlessly obnoxious as the dominant Brock.  Mr. Phillips gleefully revels in the character’s abrasiveness with hilarious and dramatic results unconcerned with being likable.

As Ted, the bearded Michael Ray Wisely is delightfully folksy, offering a skillfully sympathetic portrait of a family man caught up in the rat race.  Mr. Wisely’s periodic volatility is riveting. 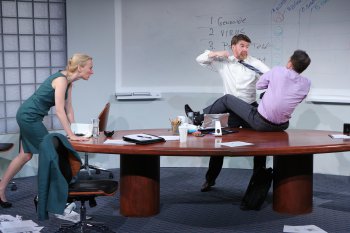 Embracing and going beyond the stereotype of the Indian technocrat is Jason Kapoor as Sandeep.  With his dry delivery and strong presence, Mr. Kapoor’s intense performance makes a major impact.

The youthfully charming Ben Euphrat is Scooter, the nepotistic intern who instigates much conflict with his ineptitude.  Mr. Euphrat wonderfully veers from understated to expressive. His piercing eyes and neutral countenance adds a compelling dimension of mysteriousness to the part.

Mr. Loeb’s writing delineates each character with strong personal traits and biographical details. He has a created a wild plot that doesn’t seem so outlandish considering documented cases of pernicious corporate activities.  Shocking revelations are disclosed with a deadpan tone reminiscent of Harold Pinter’s later allegorical political plays.  His dialogue is an often very funny Orwellian distillation of business world jargon.  A flaw is that at an hour and forty minutes without an intermission, Ideation gets repetitive and slackens at times.

Containing plentiful twists and turns and darkly comic, Ideation is a fresh and provocative take on white-collar culture.