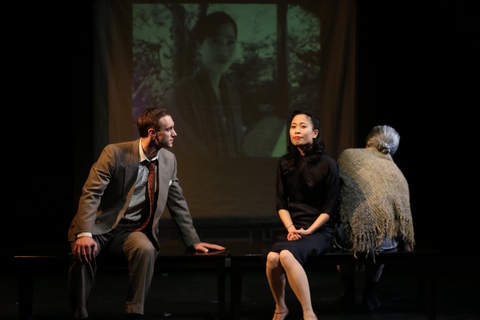 Pan Asian Repertory Theatre has chosen a new play with an interesting premise as part of its 38th Season. In Film Chinois, Singaporean playwright Damon Chua has attempted to write a film noir stage thriller set in the tumultuous world of Beijing in 1947, just before the Communists took over. Chua has obviously learned all of the trademark characteristics of film noir. Unfortunately, the play in 17 scenes is confusing, complicated and difficult to follow. More damaging still, there are not enough clues to solve the mystery before it is revealed, and at its conclusion, it continues to leave the audience baffled by its plot. Director Kaipo Schwab also knows the elements of film noir and the play has an air of the clandestine and covert. What the production lacks is urgency and a sense of genuine tension. We never know what is really at stake.

Set entirely at night, the play brings American operative Randolph Edward Dean to Beijing on a secret mission that remains hidden from the audience. There he meets a beautiful mysterious Chinese woman who calls herself Chinadoll, a Maoist, who may be the person he was supposed to contact – or not. Crossing their paths are the Belgian Ambassador with an evil secret of his own and his current girlfriend, Simone, the singer at the Peach Blossom Nightclub, who has a desperate need for transit papers. Among the baffling clues are a can of film, “The Twins” and a man with a mole with two hairs.

Granted Chau has a superficial knowledge of film noir technique, the innocent operative, the double agent, the femme fatale, the immoral foreigner, the nighttime setting, desperate people, gun play, villains who will stop at nothing, enigmatic shadows and tails, torture, and a setting fraught with danger. Unfortunately, these things alone are not enough to imitate this style successfully. Aside from the lack of tension, the narration by Chinadoll (mimicking those in Raymond Chandler stories) only slows the plot down while making it more confusing, and the use of one actor (James Henry Doan) to play a series of mysterious men – who may or may not be the same man – is quite bewildering. 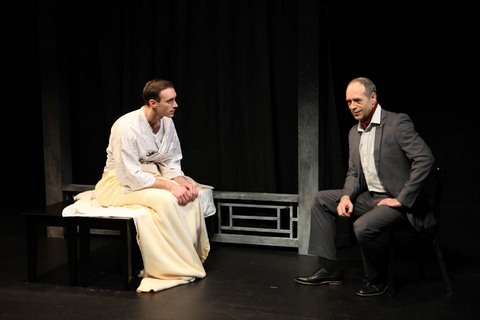 While it was often not possible to solve some of the classic film noirs (The Big Sleep, for instance) what they always offered in spades was not only tension which kept you on the edge of your seat but a sense of impending doom. Here, as we don’t understand what is at stake, we can’t know the consequences. Ultimately, the exotic setting is as artificial as the play and is totally unused except for the fact we know that Beijing will fall to the Communists two years later, which is not much used in the storyline. At 17 scenes, Film Chinois plays like an unproduced film script rather than a stage play.

The production has not been helped by the design team. Sheryl Liu’s setting consists of four archways in which the various scenes alternate. While this allows for a quick segue between scenes, the setting is almost devoid of atmosphere. Aside from the one Chinese lantern and the perennial darkness in the rear of the stage, Marie Yokoyama’s lighting design does not add much to the milieu. Carol A. Pelletier’s costumes do not suggest the late 40’s. The sound design by Ian Wehrle creates a melancholy mood but not one redolent of danger.

Under Schwab’s graceful but leisurely direction, the women are much more effective than the men. Roseanne Ma as femme fatale Chinadoll suggests much she does not say, while Katie Lee Hill as songstress Simone captures the fears of one caught in the middle of something she does not understand. On the other hand, Benjamin Jones as the American operative is too bland and too innocent to hold the center as hero. In 1940’s film noirs, the protagonists were always actors of tremendous personality and charisma (such as Humphrey Bogart, Robert Mitchum, Orson Welles, John Garfield, Alan Ladd) who made their characters more interesting than they actually were. Jean Brassard as the Belgian Ambassador says all his lines with a sneer in his voice but can’t do much with an underwritten role. Listed in the program as “The Man, a Mysterious Presence of Many Faces,” James Henry Doan returns in so many guises that it is not possible to know who he is at any given time, but seems to be doing a series of walk-ons.

While Film Chinois certainly has an interesting premise to create a stage film noir set in turbulent postwar China, the play fails to deliver on its promise to entertain as well as thrill with a coherent story. Though the play has all the elements of the genre, here they are confusing rather than organic to the material. The elegantly staged production never remembers to turn up the heat.

Running time: one hour and 40 minutes with one intermission