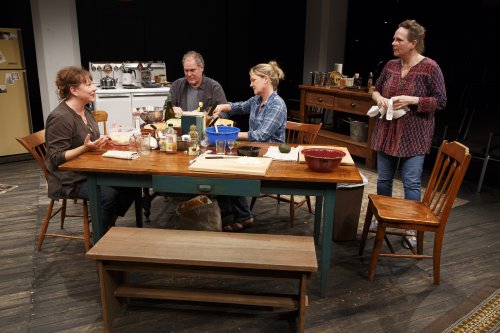 Amy Warren, Jay O. Sanders, Lynn Hawley and Maryann Plunkett in a scene from Richard Nelson’s “What Did You Expect?,” Play 2 of “The Gabriels: Election Year in the Life of One Family” (Photo credit: Joan Marcus)

While Hungry, Play 1 in Richard Nelson’s new trilogy, The Gabriels: Election Year in the Life of One Family, was about security and the unpleasant changes in the last 20 years, What Did You Expect?, the second play in the series, now having its world premiere at the Public Theater, is all about economics. The Gabriels of Rhinebeck, New York, are on the verge of bankruptcy and some tough decisions must be made. It is a feeling that many in the audience may share.

Like his Apple Family Plays, Nelson’s The Gabriels cycle all take place in a kitchen on a specific day in almost real time using the same six actors to play the family members. These are occasional plays which define a moment in time, as well as being chamber plays, small cast plays set in one place. Not much happens but much gets said and discussed. Described as “Chekhovian” by Oskar Eustis, artistic director of the Public, What Did You Expect? is less so as there really is no dramatic event as in such Chekhov plays as The Cherry Orchard or The Sea Gull. However, leisurely told and extremely detailed, What Did You Expect? offers its own rewards but may not be for all theatergoers. It is an evening of excellent talk which defines a family of have nots in our own time.

Set in the kitchen of playwright Thomas Gabriel who died the previous November, What Did You Expect? takes place on the evening of September 16, 2016 (the night the play opened at the Public), six months since we first met the family in Hungry. Mary, Thomas’ widow, a retired doctor, is preparing dinner for the whole Gabriel clan including visiting matriarch Patricia, now living in an assisted living facility she can no longer afford. At the same time, George and Hannah, Thomas’ brother and sister-in-law are preparing a picnic lunch for a literary walk the following day with a Wall Street millionaire for whom George hopes to work. Thomas’ first wife, Karin, an actress and a teacher, has moved into the house as a paying boarder, as she is now teaching at a nearby college, money useful for Mary. 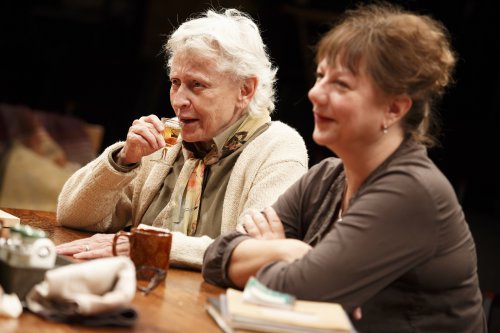 Robert Maxwell and Amy Warren in a scene from Richard Nelson’s “What Did You Expect?,” Play 2 of “The Gabriels: Election Year in the Life of One Family” (Photo credit: Joan Marcus)

The family gathering has been called to discuss the fact that Patricia is $13,000 in arrears at her senior residence. In addition, only the day before George and Hannah discovered that some time earlier the elderly Patricia (suffering from memory loss) arranged for a reverse mortgage on the family house that Mary and Karin are living in, so that they no longer know if the family owns it.

Today is the day that George has arranged to sell the Bechstein upright piano even though he supplements his income as a carpenter by giving music lessons. Something’s got to give. Patricia’s car will also have to be sold. Karin is going through Thomas’ papers to see whether there is something to sell and George is hoping to get the job renovating the new Rhinebeck home bought by his millionaire friend. And Mary wonders whether she can return to medicine even though she has let her medical license lapse.

By the time dinner is prepared, the family knows just how bad things are. There is a palpable sense of fear and unease. There is no comfort that they will be able to make ends meet in this election year that ought to bring new hope for the future. Periodically Patricia asks metaphorically – and ironically under the circumstances, “What can I do?” as dinner is made. Mary’s mantra is a quote from her late husband: “Things get better,” but she personally believes that some things get worse.

Jay O. Sanders and Lynn Hawley in a scene from Richard Nelson’s “What Did You Expect?,” Play 2 of “The Gabriels: Election Year in the Life of One Family” (Photo credit: Joan Marcus)

Under Nelson’s assured direction, the cast appears to be living their roles as family members, rather than acting them, and has become a true ensemble. Maryann Plunkett (who also appeared in all of four of  Nelson’s Apple Family Plays along with Jay O. Sanders) is the seemingly unflappable Mary on the surface who hides her fears and discontents which tend to break out in periodic flashes. Lynn Hawley and Sanders are very believable as Hannah and George, a long-married couple who correct each other as they probably have been doing for years, while being the only ones in the family who are very much aware of the current economic realities. Her job working for a caterer and his work as a master carpenter are not paying the bills.

As the elderly matriarch of the Gabriel family, Roberta Maxwell doesn’t get to say much but makes her presence felt as one disappearing into a distant fog of memories. The actress/teacher Karin, played by Meg Gibson also seems lost in a theatrical world (represented by the papers of the late Thomas) that may be long gone. Amy Warren as Thomas and George’s sister Joyce, an assistant costume designer, only passing through, reminds them that she has no savings, while she continually tells anecdotes of celebrity affairs she is required to work at for her boss that demonstrate how the 1% live.

The play’s milieu is the same Susan Hilferty and Jason Ardizzone-West setting that was used for Hungry. The furniture is on stage when the audience arrives; then the actors suddenly bring on all the kitchen items, turning the room into a much lived in center of family life, one which could easily disappear in foreclosure. Hilferty’s costumes are casual clothing typical of modern life that are real enough that they might be the actors’ own. The sound design by Scott Lehrer and Will Pickens has again been kept at a low level so that it is initially a strain to hear the conversations, but the ear eventually learns to accommodate. Jennifer Tipton’s lighting appears to be kept at the same brightness throughout except for occasional blackouts to suggest brief lapses in time.

While What Did You Expect?, Play 2 of The Gabriels: Election Year in the Life of One Family, does not address the current presidential race except tangentially, it does deal with the issues that concern many Americans at this time. If you saw the first Gabriels play, Hungry, they will seem like old friends and, like many conversations among peers, what is on their minds will only become obvious by the end of the evening. The last installment of the Gabriels cycle, Women of a Certain Age, takes place and opens on November 8, 2016, as the family awaits the results of the presidential election.

What Did You Expect? Play 2 of The Gabriels: Election Year in the Life of One Family (through October 9, 2016)