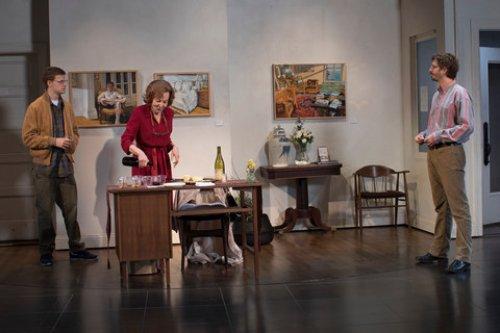 Lucas Hedges, Elaine May and Michael Cera in a scene from Kenneth Lonergan’s “The Waverly Gallery” (Photo credit: Brigitte Lacombe)

The brick wall that greets you when you arrive at Broadway’s Golden Theatre feels foreboding and prohibitive, as if the play that’s about to begin will not let you in. But nothing could be further from the truth with Kenneth Lonergan’s The Waverly Gallery, a marvelous and heartfelt drama, now receiving a perfect revival under the careful direction of Lila Neugebauer.

When the brick wall rises to reveal the eponymous art gallery, we’re immediately introduced to Gladys Green (Elaine May), an “absolutely relentless talker,” telling her grandson, Daniel (Lucas Hedges), about the time his father left his mother, Gladys’ daughter, Ellen (Joan Allen). And although she does seem to chatter on incessantly, Gladys proves a better talker than listener.

For one thing, she’s terribly hard of hearing–Daniel attempts to adjust his grandmother’s hearing aid early in the opening scene, just as his mother and stepfather, Howard (David Cromer), do in subsequent ones. For another, her memory is getting worse and worse, seemingly by the minute. During the course of the play, Gladys insists that Daniel writes for a newspaper, even though he repeatedly explains that he writes “speeches for the Environmental Protection Agency.”

And then there are recurring scenes when Gladys, Daniel, Ellen, and Howard, are all talking simultaneously, so no one really knows what anybody is saying. For his part, Howard attempts to deal with the problem by shouting whatever it is he has to say to Gladys. While that might sound somewhat annoying, Cromer–one of our finest theater directors–has a way of making it touching, as Howard.

A fifth character, Don (Michael Cera), has driven to New York from New England, to seek success as a painter. He’s living in his car, when he finds the Waverly Gallery, and Gladys offers to show his work. The magnanimous and kind-hearted Gladys even says that Don can live in the gallery. 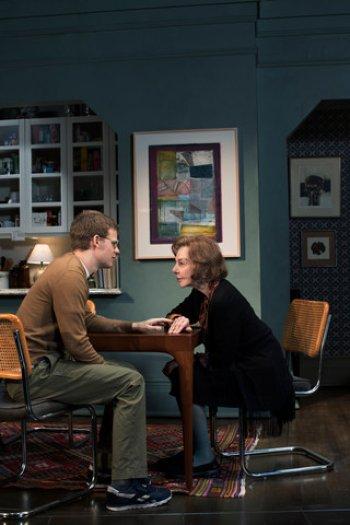 Lucas Hedges and Elaine May in a scene from Kenneth Lonergan’s “The Waverly Gallery” (Photo credit: Brigitte Lacombe)

But with Gladys’ encroaching senility making it more and more difficult for her to understand–or to be understood–suffice to say that every other character we meet becomes increasingly frustrated and exasperated. Ellen is given to muttering, “I’m going to blow my brains out,” and “I’m going to slit my wrists.”

Daniel, who lives down the hall from his grandmother, in the same Greenwich Village apartment building, is the narrator of the story, as he walks to the foot of the stage, steps out of character, and addresses us directly, sometimes reinforcing what we’re watching happen. He tells us, for instance, that Gladys’s “mind was smashed to pieces, and the person she used to be hadn’t really been around for a long time.” Even in her more lucid moments, Gladys says, “I’m all mixed up” and “I don’t understand what happened to me.”

The most heart-wrenching scene comes late in the play, when Gladys leaves her apartment, lost and confused, walks down the hallway, and rings Daniel’s bell. It’s after midnight, and she wakes Daniel up–she does so repeatedly, up until three o’clock in the morning, asking why Ellen left without saying goodbye, among other things.

Playwright Lonergan also reserves his wryest remarks for Daniel–his principal spokesman and a stand-in for himself (Gladys is based on Lonergan’s grandmother)–such as when he describes his family as “liberal Upper West Side atheistic Jewish intellectuals–and we really like German choral music.”

When Howard asks Daniel if his offstage girlfriend is “involved in politics,” Daniel replies, “No, she’s involved in torture. She comes over and she tortures me and then she goes away and looks around for somebody to torture her.” He later says of her: “That’s the third psychoanalyst who’s tried to treat her and ended up killing himself. She’s cutting a swath of terror through the New York Psychoanalytic Institute.” 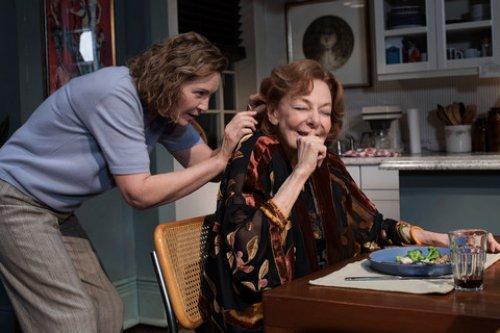 Joan Allen and Elaine May in a scene from Kenneth Lonergan’s “The Waverly Gallery” (Photo credit: Brigitte Lacombe)

Even with the indelible impression of Eileen Heckart’s magnificent, original Gladys intact, Elaine May overcomes any comparisons as the current Gladys. There is nothing inventive or even artful about her performance: May simply is Gladys and Gladys is May, tracing her deterioration into senility with a remarkable realism.

As Gladys, May has almost as many costume changes as she does lines and apparent lapses in attention. The always apt costumes have been designed by Ann Roth, and scene designer David Zinn brings his customary attention to detail for realizing the spartan gallery, as well as Ellen and Howard’s handsomely appointed apartment and Gladys’ overcrowded home.

As Ellen, Joan Allen has her apogee when she breaks down, sobbing on Daniel’s shoulders, saying, “I feel so dismal and hopeless.” Daniel is played by the gifted Lucas Hedges who also appeared in Lonergan’s recent Academy Award winning film, Manchester by the Sea, as Casey Affleck’s nephew, as well as in Three Billboards Outside Ebbing, Missouri. His Daniel is strong, self-assured, sad and funny, all at the same time.

Michael Cera portrays a baffled Don, the painter and the outsider in their midst, with utter conviction. Nor is it a coincidence that Cera acted in Lonergan’s This Is Our Youth and Lobby Hero.

In the end everyone involved with Alzheimer’s, both on stage and off, is left feeling, like Ellen, dismal and hopeless, which is why The Waverly Gallery must be seen.