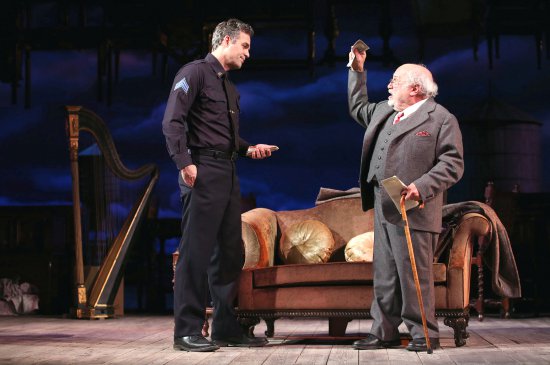 Mark Ruffalo and Danny DeVito in a scene from “The Price” (Photo credit: Joan Marcus)

Set in the attic of a Brooklyn home that’s about to be demolished, but needs, first, to be cleared of its contents, The Price is an emotionally claustrophobic play by Arthur Miller. Also in need of being cleared of things are its two main characters–brothers who haven’t seen each other in the 16 years since their father died, when the play begins. Victor and Walter go to verbal battle in the second of this two-act play, which is usually performed without an intermission, as was apparently Miller’s preference. But that would make for a less effective evening than the one delivered here, in a first-rate production, as directed with utter naturalness and finesse by Terry Kinney for the Roundabout Theater. The break in the play allows us to consider all that’s come before, before the real fireworks ensue in the second half.

Maybe “fireworks” is too strong a word for a production that is more of a slow burn. The play begins when Mark Ruffalo, as Victor, walks up, into the top floor of the home his family was consigned to, when the Great Depression of 1929 hit and their father lost his fortune. The essence of the conflict between Victor (a policeman) and Walter (a doctor) boils down to economic inequality. (As Walter says to Victor, “It’s very complicated between us.”) Though they both grew up with a chauffeur, the older Walter went on to a successful career while Victor stayed behind to care for their father when everything was lost during the Depression.

Though we meet Victor’s wife Esther (Jessica Hecht), early on–and soon thereafter, Solomon, the man who’s employed to assess and buy the home’s contents–Walter doesn’t even arrive on the scene until the very last moment of the first act, when he, like everyone else, walks onto the stage from below. With roof-water towers in the background and an appropriately cluttered set, Derek McLane’s designs evoke the New York of the mid-1960’s, when the play is set. 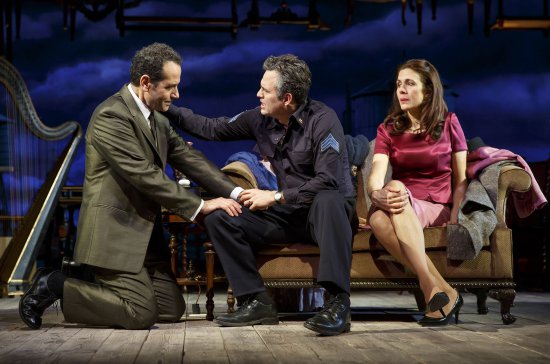 Though The Price is really and primarily about the strained relationship between two brothers, Danny DeVito, playing an outsider, hijacks this production and makes it his own. Perhaps Arthur Miller’s most comedic character, Solomon was a vaudevillian “acrobat” (“I was on the same bill with Gallagher and Shean maybe fifty theaters,” he tells Victor), who delivers his every line with stereotypically Jewish shtick. Though DeVito, who recently told Michael Riedel, “I’m not Clark Gable or Cary Grant,” may be extremely modest, his Solomon is anything but: he’s a larger than life presence who says things like, “All the girls like me,” and referring to his considerable age, “Time, you know, is a terrible thing.” Victor tells him, “You’re a hell of a guy.” Just like everyone in the audience, Victor is clearly amused by Solomon.

Getting the kind of laughs that only top-flight comedians earn at the top of their game, DeVito sits down in a chair, removes a hard-boiled egg from his briefcase, and proceeds to gobble it down, rather spraying it all over the place from his mouth, as he says to Victor, in the midst of their negotiating the “price” for all the furniture he’s going to take away and resell, “You give me such an argument I’m hungry,” and “There wouldn’t be a little salt, I suppose.” (Seeing as it also contains a Hershey Bar and an orange, Solomon’s briefcase seems as much a refrigerator as a conveyor of documents and folders.)

As Victor, the always-convincing Ruffalo has no choice but to become the straight man to DeVito’s shenanigans. But Victor is something of a straight man, and a schlemiel, in the first place. The contrast with Walter–who, in the person of Tony Shalhoub, arrives, spiffy in his camel’s-hair coat, exuding confidence and charm, and bluster, even–is very sharp indeed. (When Esther compliments Walter on his coat, he says it cost him “two gall-stones.”) 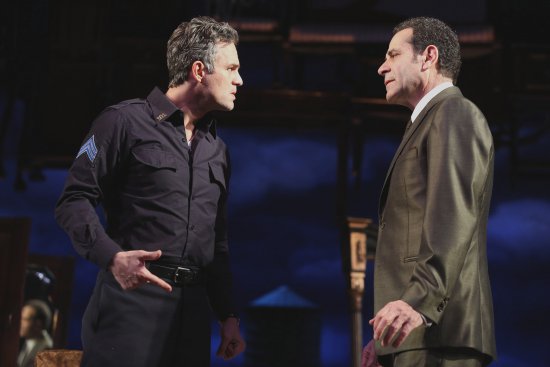 Shalhoub makes the most of a pretty thankless role: in the lifelong rivalry between the two siblings at the heart of this play, Walter is really more of a villain, in every sense of the word: he blames his brother for taking care of their father, at Victor’s own expense, when Walter himself chose to walk away from the situation. But then, Walter also says, “I used to blame myself for a lack of feeling,” which elicits more sympathy than his character warrants.

With relatively little stage time and far fewer lines, the stalwart, stage-actress Jessica Hecht also makes a full-bodied character out of Esther. The pink suit Hecht wears instantly reminds us of Jackie Kennedy’s on that fateful day, when it was stained with her husband’s blood. (Sarah J. Holden did the appropriate costumes.) Esther, however, is anything but financially secure, as she encourages Victor to get Solomon to offer more money for the family furniture, or to participate in the high-handed tax scheme that Walter proposes, and that Solomon seems willing to go along with. Like the play itself and the rest of the cast, Hecht is perfectly natural, at all moments.

The great critic and theater-practitioner Harold Clurman once wrote that The Price is “powerful despite the triviality of some of its details.” But even if many consider it one of Miller’s more slight offerings, this particular “Price” is “right.”