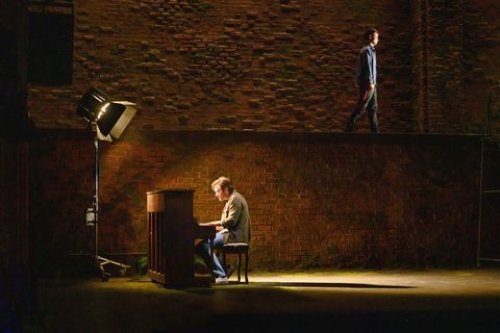 Jake Gyllenhaal is sitting at a piano on the large, bare and stripped down stage with bricks as the background and florescent lighting hanging from the ceiling. This is what the audience sees when they arrive for Sea Wall / A Life, a double-bill of maudlin monologues. Eventually Mr. Gyllenhaal rises, paces around and leaves. This languid beginning is representative of what’s to come.

With each of their characters grappling with the deaths of loved ones, British playwrights Simon Stephens and Nick Payne offer uncompelling pseudo-intellectual scenarios laced with platitudes. “We try to operate in a culture of optimism,” says a doctor regarding a medically hopeless situation. The tepid textual deficiencies are magnified by the wan performances.

After Gyllenhaal’s exit, British actor Tom Sturridge appears, fiddles around with the lighting and launches into his narrative often addressing the audience directly. Through piecemeal information, we surmise that Alex is a photographer, he’s madly in love with his wife and their eight-year-old daughter. They go on a vacation with his wife’s former British soldier father to the south of France.

Known for his acclaimed stage adaptation of The Curious Incident of the Dog in the Night-Time, Mr. Stephens in Sea Wall tosses off an elliptical doodle lasting 45 minutes. Shards of biographical details are interwoven with extraneous philosophical observations culminating in a gratuitously unpleasant denouement. Yes, life is sad and often filled with horrendous random events, but Stephens’ treatment is an uninvolving exercise. 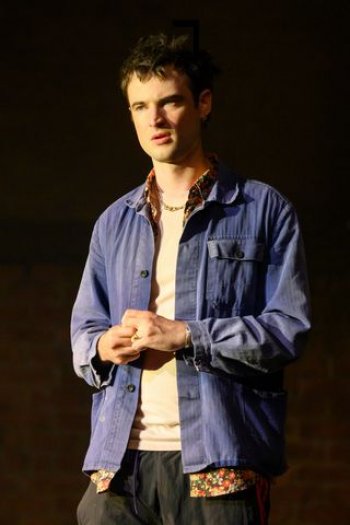 Employing a singsong delivery that then trails off into a pause and repeating this noxious pattern over and over is the chief facet of Mr. Sturridge’s actorly performance.  Sturridge is personable but does not elevate the limp material with his hollow work.

On screen and stage Gyllenhaal has exhibited his talent and star quality to great effect many times. A Life is not one of those shining occasions as he is just passable in it. Stammering, shrugging and halting like Woody Allen in Annie Hall’s prologue is how he starts off and later alternates jokiness and histrionic emotionalism as the piece’s lugubrious events unfold. This is simply an opportunity for fans of Gyllenhaal to see him in person and the performance succeeds on that level.

He portrays Abe in Mr. Payne’s work which cross cuts between memories of his beloved wife’s pregnancy and memories of his father’s physical decline. Ah, birth and death. A Life by the author of Constellations and Incognito is more facile than profound. 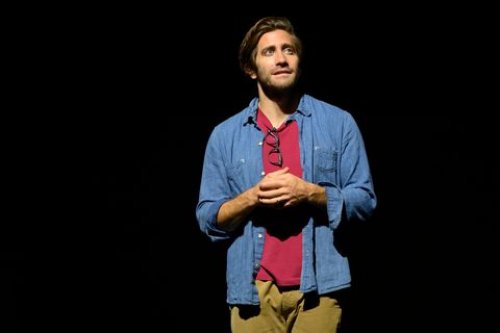 This is Stephens’ requirement in Sea Wall’s stage directions which director Carrie Cracknell somewhat follows as she has Sturridge often on a ladder, on an upper level and in general far away when he’s not in the audience. Ms. Cracknell places Gyllenhaal in a variety of positions so the presentation is physically well-staged.

There’s shtick about turning on and off lights, and lighting designer Guy Hoare simulates that as well as achieving a moody and mystical dimension characterized by prevalent dimness and darkness. Laura Jellinek’s arresting scenic design has a metaphorical quality in visually depicting the plays’ cerebral tone, resulting in the actors seeming to be in their minds. Sound designer Daniel Kluger’s dramatic effects suitably evoke the metaphysical. The actors are casually and stylishly clothed by costume designer Kaye Voyce.

This Broadway production of Sea Wall / A Life is a transfer of The Public Theatre’s version from last season. It is possible that it was more engaging Off-Broadway on a smaller scale.