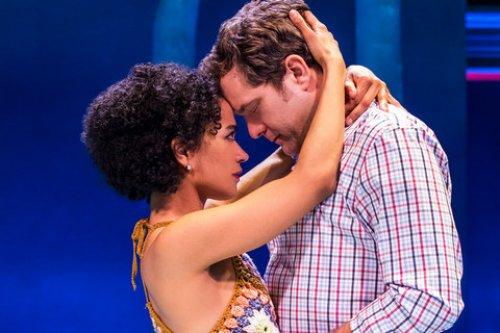 Lauren Ridloff and Joshua Jackson in a scene from Mark Medoff’s “Children of a Lesser God” (Photo credit: Matthew Murphy)

Ex-Peace Corp volunteer and troubled James Leeds, a man in his 30’s, is a speech teacher at school for the deaf run by the amiable though steely Mr. Franklin.  James becomes infatuated with Sarah Norman, a 26-year-old woman who works as a cleaning woman at the school.  She was born deaf, was a student there and is estranged from her mother. The deaf student Orin is a fiery champion of deaf solidarity and has feelings for Sarah. There is also the lively Lydia, a student with some residual hearing.

The events are told as a memory play from James’ perspective. Medoff joins his engaging love story with a conflict over a social issue. Sarah, stands apart from James and the other deaf characters by refusing to learn to attempt to speak, instead communicating through American Sign Language. This clash dominates the play’s second act resulting in searing conflicts.

Director Kenny Leon imposes an odd production design on the presentation that is distracting.  In his stage directions Medoff writes “The stage is bare, holding only a few benches and a blackboard and permitting characters to appear and disappear easily.” 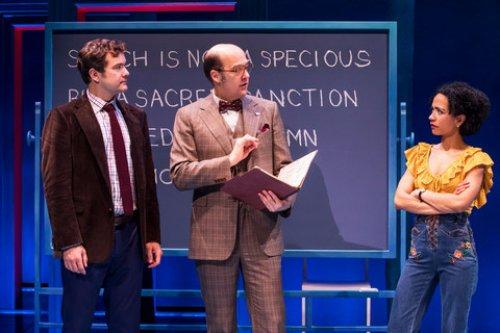 Instead, scenic designer Derek McLane has the stage set with a series of tall elaborate white doorframes interspersed with tall thin tree trunks. This could be quite suitable for a Shakespearean or a Chekhovian work but here it’s visually incongruous.  Above the stage supertitles of the dialogue and descriptions of the music are projected.

The theatrical displacement is compounded by Mike Baldassari’s lighting design that periodically bathes everything in shades of dark blue, deep red and a variety of hues.  These pyrotechnics sidetrack the play’s focus. That we’re in the late 1970’s is only really gleaned from sound designer Jill BC Du Boff’s samplings of pop songs of that era. The opening has the audience sitting and waiting for the play to actually start as Stevie Wonder is heard; later on there are doses of Paul McCartney.  These technical elements are all accomplished but out of place. Costume designer Dede Ayite’s macramé and bell bottoms ensembles for Sarah evoke the fashions of the time and her creations for the other characters are artfully realized as well.

“The author insists that—in any professional production of this play—the roles of Sarah, Orin and Lydia be played by deaf or hearing-impaired actors.” Mr. Leon follows this edict with great success but a primary casting selection is not as inspired.

A regular on the television series Dawson’s Creek and currently appearing on The Affair, the affable Joshua Jackson plays James. Mr. Jackson’s talents are not showcased in this production. Jackson’s speech pattern is monotonous and his lack of sensuality makes the attraction between him and Sarah less than palpable. He gets through the role with professionalism but with little impact. Others in the cast make up for this void but the vacuum of implausibility looms. 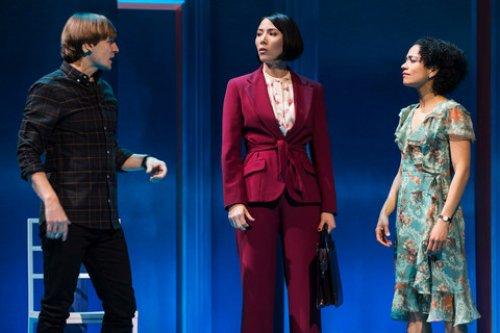 John McGinty’s dynamic portrayal of Orin is so fascinating that the play could be about him. The youthful, athletic and shaggy-haired Mr. McGinty’s natural voice of variable pitches and personal charisma conveys the anger and emotion of this idealistic warrior.

A key player is such films as Top Gun and known for his role of Dr. Mark Greene on ER, Anthony Edwards makes his Broadway debut as Mr. Franklin. It’s an enjoyable turn without much heft.

The indomitable Kecia Lewis’ scenes as Sarah’s mother are wrenching. Comic relief is provided by the charming Treshelle Edmond’s winning characterization of Lydia. Julee Cerda delightfully makes the most of her appearances as a crusading lawyer who intercedes on behalf of the students over a dispute. 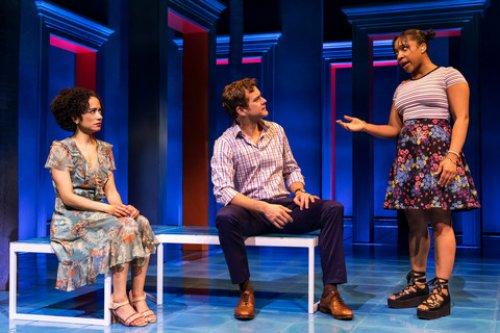 Children of a Lesser God began as a series of workshops and productions at New Mexico State University. Medoff based the play on the life of deaf actress Phyllis Frelich and her husband Robert Steinberg. Gordon Davidson directed a revised version at Los Angles’ Mark Taper Forum in 1979.

It transferred to Broadway with Ms. Frelich as Sarah and John Rubinstein as James, opening on March 30, 1980 and running for 887 performances. In addition to winning the Tony Award for Best Play, Frelich and Mr. Rubinstein won the awards for Best Actress and Best Actor in Play. The 1981 London production won the Laurence Olivier Award for Best New Play.

One could analyze and critique from today’s perspective the treatment of various societal concerns that were dramatized nearly 40 year ago in Children of a Lesser God. The main thing is that it holds up as an affective stage piece but is considerably let down by this problematic production.

For tickets, call 800-447-7400 or visit http://www.childrenofalessergodbroadway.com

2 Comments on Children of a Lesser God