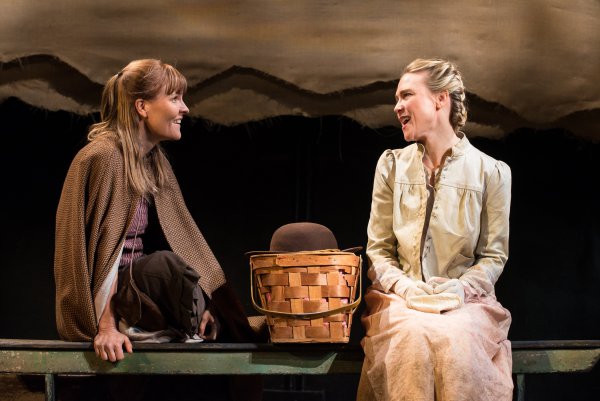 “I savor the boundlessness of it all. The wild flavor. I’m drunk with Western fever,” exclaims Macon Hill, an exuberant young woman at the beginning of this excellent revival of Beth Henley’s very moving, American Old West saga, Abundance.

It’s the late 1860’s, and Miss Hill strikes up a friendship with the more sedate, young Bess Johnson.  They’re two mail-order brides from The East Coast awaiting the arrivals of their husbands-to- be.

After corresponding with two men they’ve never met, with the intention of marriage, they’ve journeyed to the Wyoming territory.  Eventually after getting to know each other and forging a great bond, they meet their intended spouses.  It is instantly clear that this was common for that time situation, characterized by practicality, rather than by romance.

The amiable one-eyed widower Will Curtis is for Miss Hill. Due to unforeseen circumstances, the taciturn Jack Flan is for Miss Johnson.  The two couples go off to begin their new lives.

In a series of sharply written short scenes, the course of 25 years is depicted.  The two couples endure immense hardships caused by life’s twists and turns.  These include incompatibility, financial upheavals, and the threatening elements of blizzards, wild animals, and the threat of Indian attacks. A devastating incident occurs with shattering repercussions.

Beth Henley came to prominence in her 20’s with her 1981 Pulitzer Prize winning play, Crimes of The Heart.  This work premiered at the Actors Theatre of Louisville in 1979 and was produced Off-Broadway in New York City the following year, before transferring to Broadway.  Before this production, it was seen during the 1979-1980 season at various regional theaters across the United States.

Inspired by real life events of the 1860’s and concerned with telling the relatively unknown stories of women pioneers, Abundance is highly engrossing, steeped in historical details, and a poignant examination of relationships and friendships.

Each of the four main characters is precisely detailed.  The complexity of their virtues and flaws are examined with great clarity.  The good and bad sides of everyone are shown realistically.

Ms. Henley’s dialogue is simple and often terse but achieves great impact, whether with aching sincerity or while being sardonic:

“I always thought I’d make much more of myself than this.  My husband gave me a Christmas card from our cow.”

“My eye’s burning.  I’m about to take it out for the evening.”

“[He] got caught in a threshing machine back in ’87.  Got his leg caught off in the blade.  Bled to death in a field.  Funny, I always figured he go piecemeal.”

The rich characterizations of the terrific cast vividly realize the author’s vision. It’s like watching actual people in the late 19th century.  These consummate actors all superbly display the complexities of human nature. 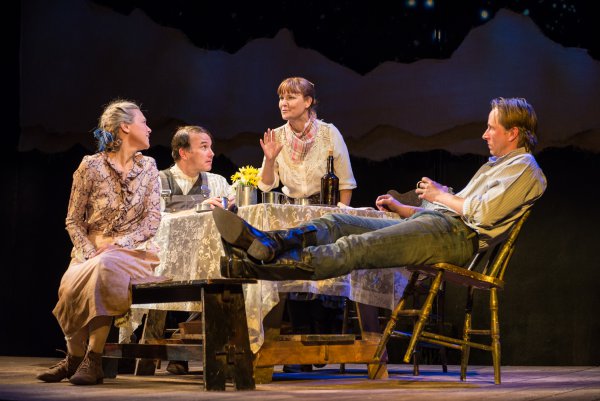 Initially whistling and happy go lucky, Kelly McAndrew as Macon is radiant.  She perfectly captures the character’s upbeat resourcefulness despite adversity.  She is like Mother Courage of Wyoming.

Transcending the old maid stereotype, Tracy Middendorf as Bess is spellbinding.  Veering from understated to ferocious, she commandingly gives a performance of tremendous range and depth.

With brooding intensity, the athletic and magnetic Todd Lawson as Jack recalls an enigmatic rogue out of Sam Shepard.  He masterfully presents the role’s cunning opportunism with empathy and charm.

Ted Koch as Will offers an expressive portrait of the good-natured man who over time comes to seethe with anger.  He humorously makes the most out of having one eye but ably becomes more and more dramatic as time goes by.

As a scholarly character that appears in the second act, Jeff Talbott makes a very fine impression.  He excels as this steely intruder into the quartet’s lives with suitable refinement.

In addition to orchestrating the ensemble’s sterling performances, director Jenn Thompson’s staging is inspired.  Actors enter and exit from unexpected places.  The pacing is swift and the passage of time is clearly evoked.

The walls of the stage are adorned with cutouts of mountaintops. A slightly raised wooden platform represents a house and its verandah.  A wooden crane with a rope visually dominates.  Simple rustic furniture is on display.  All of these elements of Wilson Chin’s accomplished set design combine to create a perfect sense of time and place.

The Actors Company Theatre (TACT), whose goal “is all about reimagining works that might benefit from a new perspective”, has presented Abundance.  With this gripping production of it they have fully succeeded at that mission.

The play wistfully ends as it began, with a scene between the two women:

“You know, when I was younger, I never knew who I was, what I wanted, where I was going or how to get there.  Now, that I’m older, I don’t know none of that either.”