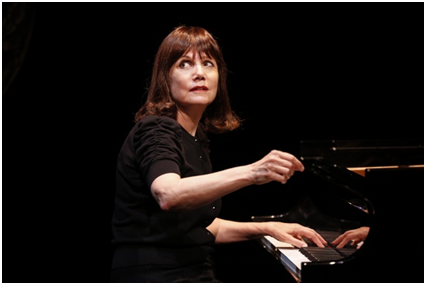 Mona Golabek stars in The Pianist of Willesden Lane which launches the inaugural 5A Season at 59E59Theaters (Photo credit: Carol Rosegg)

The Pianist of Willesden Lane takes a subject almost universally sentimentalized and almost irretrievably degraded, and restores its necessity and dignity. This play launches the new 5A Season at 59E59 Theaters.

Yes, this is a Holocaust narrative, but don’t click that Back button just yet. Please.

This is what happens: you enter the theater, and find the modest stage is mostly occupied by a Steinway concert grand. A woman enters and explains that she is going to tell the story of her mother, concert pianist Lisa Jura. The storyteller Mona Golabek is herself a concert pianist, and from time to time in this one-woman show she sits and interweaves her story with music, the same music which her mother was studying during the events being retold. Studying, because this story covers her mother’s life from age 14 to 21, from promising student to concerto debut, from Vienna to London, from Anschluss to Blitz to V-E Day.

Concert musicians who can deliver a 90-minute monologue are rare, but Golabek is equal to the task. She is not an actor, but presents the narrative in a comic mode, each character a mild caricature. The result is effectively disarming, and in harmony with the way the overall story is told, simply, generously and with affection.

The absence of self-pity and melodramatic manipulation is so absolute that it’s actually enlightening, relieving us for a moment of our necessary burden of defensive cynicism. The text is adapted by Hershey Felder from The Children of Willesden Lane (co-written by Golabek and Lee Cohen), and it’s a model of its kind, without a single moment which feels tarted up for dramatic effect. Though one can never completely trust memoirs, it never seemed the truth was being stretched, and if timelines were rigged for phony tidiness, it wasn’t detectable.

Here’s an example of how a key moment is authentic and weighty at the same time. It’s Vienna, 1938, Lisa’s family is Jewish, and it’s become obvious that the walls are quickly closing in. Her father has literally gambled his way to winning a single ticket on the British Kindertransport, one safe passage for one child from Vienna to a refuge among the Allies–but Lisa has two sisters. The parents begin to argue and agonize, so Lisa does exactly what any music student would do in that moment. She leaves the room and goes to practice. And what does she play? Not heaven-storming Beethoven: instead it’s Debussy’s Clair du Lune.

Suddenly, effortlessly, an overfamiliar piece that might normally seem merely pretty becomes a rebuke to the man-made catastrophes of our time.

The story follows Lisa as she is evacuated to London. After a bit of being shunted around, she ends up with fellow refugee children in a house on the eponymous Willesden Lane. They get through the Blitz, she does a bit of growing up, but most of all she practices in hopes of a proper debut.

Among other things, this was the best representation of what it is to be a young music student that I have ever seen on stage or screen: your relationship to your instrument is not some kind of wild passion, but simply an extension of what you are, like breathing. As a corollary, it’s quietly moving to notice that the repertory she was studying at age fourteen (Clair du Lune, the Moonlight Sonata) tells us that her mother was talented, but not a prodigy. Thus, when her parents have to decide which child to save, it’s not as if they’ve been told “your child is a genius,” but only “your child has a chance,” which makes their dilemma both more realistic and more difficult. This is the opposite of typical melodramas (such as the 1996 film Shine), which habitually exaggerate the protagonists’ gifts so as to manipulate the audiences’ sympathy.

The music is nearly always perfectly chosen. When Lisa takes a job sewing in a factory, the music is a movement from a Bach Partita featuring cross-hand passages, an apropos evocation of what used to be called “sewing-machine Bach.” The only slight mismatch is during the Rachmaninoff Prelude in C# minor–until the bombs of D-Day start falling (around halfway through)– it doesn’t quite mesh.

The presentation benefits greatly from well-selected projections by Andrew Wilder and Greg Sowizdrzal. Usually they appear in large gilded frames above the stage (designed by Trevor Hay and Felder), and are of people or places referred to by the text, but in a railway platform scene, I was tickled to note “steam” rising from the floor upstage left.

The excellent sound design by Erik Carstensen was crucial to the success of the show, but occasions the one musical reservation. When Golabek plays excerpts from the Grieg Concerto, she has to give a lot of her attention to staying in time with the pre-recorded orchestra. Although she manages this extremely difficult task pretty well, her playing becomes notably inhibited and not nearly as affecting as the other selections. I have no solution to suggest, as the Concerto is rightfully integral to the narrative, and I’m not aware of any technological solution that would allow the tempo of the recording to be adjusted in real time.

This show is an automatic recommendation for music lovers, but the people who most need to see it are exactly those who roll their eyes when they hear of “yet another Holocaust story.” I urge them, in particular, to give this one a chance.