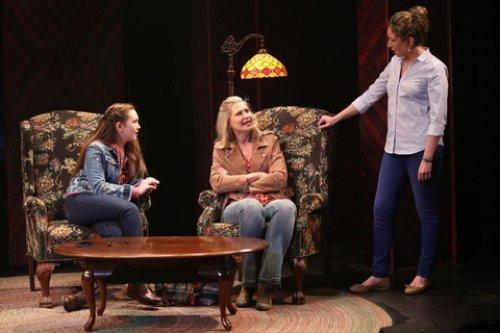 Sunny, tuneful and familiar best describes the mother-daughter conflict musical Unexpected Joy. A free-spirted aging pop singer is about to marry her lesbian lover to the chagrin of her estranged religious daughter. The accomplished score and vivid performances transcend the clichés making the predictability seem fresh.

Jump and Joy were a moderately successful pop duo who never married but had a long term romantic relationship and a daughter named Rainbow. Jump died last year and Joy is holding a memorial concert for him in Provincetown, Rhode Island. Their daughter renamed herself Rachel and has distanced herself from her Jewish parents’ counterculture sensibility.

She has arrived from Oklahoma with her rebellious 18-year-old daughter Tamara to attend the concert. Rachel married a seminarian who became a popular arch-conservative televangelist and host of The Good News Hour that Rachel sings on. Tamara has decided to be a singer-songwriter like her grandmother and is repelled by her parents’ reactionary views.

The uneasy truce between Joy and Rachel is upended by the disclosure that Joy is not only intimately involved with another singer, the fiery Jack Daniels nipping African-American woman Lou, but also intends to marry her the day after the concert. Will everyone find love, happiness and resolution? 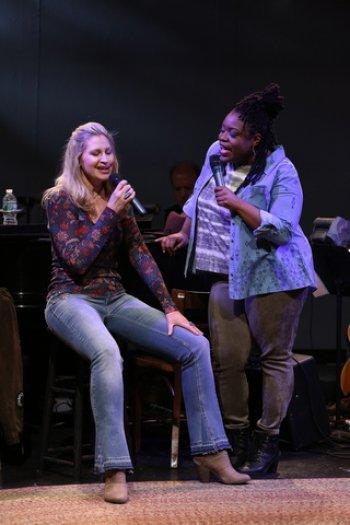 Mr. Russell’s lively lyrics emulate the poetic forthrightness of the cultural figures the show references such as Joni Mitchell. Janet Hood’s rich music has the desired authenticity and some swirling Steely Dan-style riffs.

With a Judy Collins-style mane of blonde hair and wearing jeans and suede, the sleek Luba Mason as Joy certainly looks the part. That mien is reinforced by Ms. Mason’s smoothly conversational vocal inflections and marvelous singing. Mason is totally convincing as the weed-smoking matriarch who follows her heart.

Stealing scenes without throwing them off balance is the imposing Allyson Kaye Daniel as Lou who is hilarious yet deadly serious when things become grave.  Dreadlocks and a black leather jacket aid in Ms. Daniel’s impact as does her powerful singing.

In perhaps the most hackneyed role of all, Celeste Rose does wonders as Tamara. Conveying teenage angst with captivating force, Ms. Rose is able to create a full-bodied and believable characterization. Whether performing the young woman’s self-written hard-edged songs or the group numbers, Rose is delightful.

Director Amy Anders Corcoran’s staging gracefully switches the action from Joy’s house to other locations with swiftness. Ms. Corcoran’s work with the cast is superlative as they have great chemistry together and the performance sequences have unity.

Sliding panels takes us to the rehearsal room where the terrific band comprised of conductor Beth Falcone on piano, Brian Hamm on bass, Jack Morer on guitar and Jeff Potter on drums are view for the cast to interact with.  The music and effects are adeptly rendered by Julian Evans’ sound design.