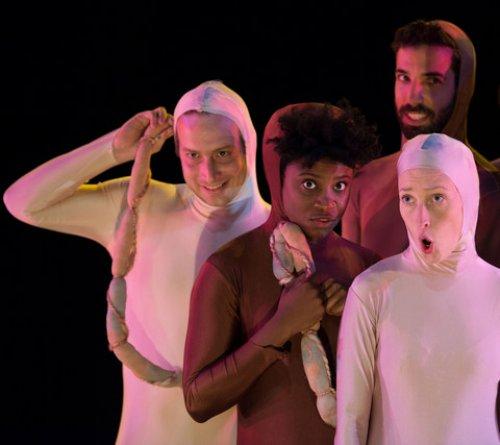 A chorus line of singing and dancing fetuses follows the eerily comical beginning of The Appointment where we first meet them posed as if they’re in wombs and babbling in baby talk. When one of them is going to be aborted a hook as from a talent show appears, encircles their necks and pulls them offstage. It’s made quite clear that this mesmerizing offbeat musical will be thoughtfully exploring the issue of abortion. There’s lightheartedness with serious overtones. The overall quality is that of a television variety special of the 1970’s with comedy sketches, musical numbers and dashes of drama.

Alternating with the fetus sequences are quite realistic scenes in a clinic. We learn all about the procedures for an early abortion through the experiences of a central woman and subsidiary characters. There’s extended bits where the fetuses talk to and engage audience members sometimes while going out into the theater. Amusing in small doses this device makes the show’s 90 minutes seem padded. Thanksgiving dinner enacted by the fetuses is a surreal highlight. 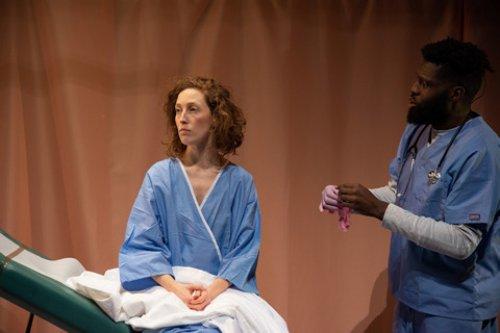 Alice Yorke and Benson Thomas in a scene from “The Appointment” presented by Lightning Rod Special (Photo credit: Johanna Austin)

The Appointment is a presentation of Lightning Rod Special. This Philadelphia-based company “creates raucous and contemplative works to ask questions of ourselves, our audience, and the world at large.” Apart from presenting the subject itself there’s no overt political message to really be discerned during this entertaining fantasia. Abortion exists and people have them is about as controversial as it gets here which for some may be incendiary.