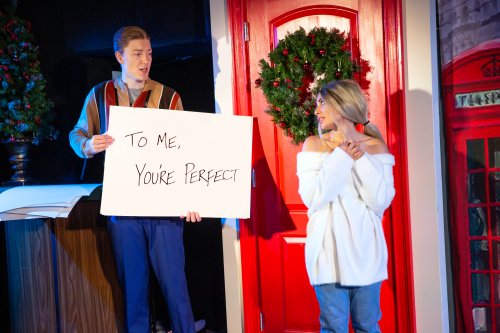 The 2003 film Love Actually from director Richard Curtis—king of British cinematic rom-coms—has apparently become a holiday classic, joining such titles as It’s a Wonderful Life, Miracle on 34th Street and A Christmas Story as part of people’s seasonal viewing rituals. A few years ago, writers from such publications as The Atlantic and Mother Jones weighed in on this pop-culture phenomenon. Some people, it seems, find Love Actually irresistible while others claim it’s soulless, overlong (at 145 minutes) and not romantic in the least.

Now, New Yorkers who know the film (and who love it, hate it or partly love it and partly hate it) have a chance to see a streamlined (at 95 minutes) musical-theatrical spoof of the film, called Love Actually? The Unauthorized Musical Parody. It’s a lively, silly and well-performed romp created by people who seem to have done a lot of this sort of thing: writers Bob and Tobly McSmith (The Office! A Musical Parody) and director Tim Drucker (Spidermusical). The three previously worked together on Friends! The Musical Parody. Basil Winterbottom has provided the engaging tunes and orchestrations for the McSmiths’ lyrics. 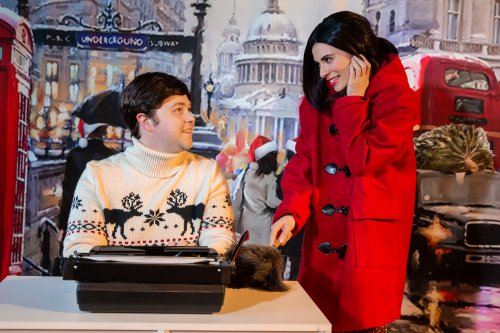 If you’re someone who grows impatient with the level of sentimentality that pervades holidays entertainments, this cheeky lightweight entertainment may be just your ticket. As satire, its primary concern is not Christmas itself, but rather the predictability that comes from adhering to the rom-com template, which among other things dictates that, whenever two characters meet, they inevitably “meet cute.” If you haven’t seen the film in a while, it’s probably a good idea to have a look at it again before going to the show. If you’ve never seen the film, such pre-show research is essential.

Part of the appeal of the motion picture is that it is a virtual parade of British film stars (plus token American Laura Linney) taking roles in an ensemble venture that makes a mosaic from pieces of nine separate stories, some of which occasionally overlap. (The McSmiths poke fun at director Curtis at one point for not making clear early on in the film that the just-installed British prime minister played by Hugh Grant happens to be the brother of the character played by Emma Thompson in one of the other storylines.) In some cases, the characters in the stage Love Actually? are called by the names of the actors portraying them in the film, as if to remind us that the movie is not primarily about its relatively shallow characters but rather about the big-name Britons who are walking away with an easy paycheck by appearing in such a goofy, frivolous property. 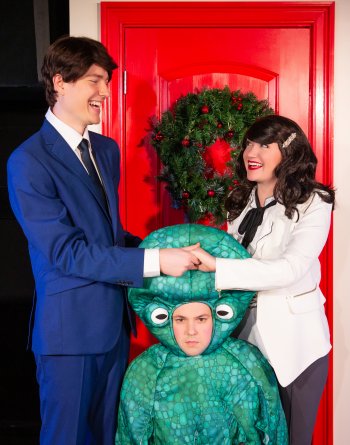 The show’s score breezes along (in recorded soundtrack format), with a series of fairly short musical numbers, some with agreeable choreography by Brooke Engen. Several of the show’s numbers reference other songs, not all of which are necessarily associated with Curtis’ film, including “The Little Drummer Boy,” “Both Sides Now,” “Suddenly, Seymour” and Sweeney Todd ’s “Johanna.”

The cast of six play an array of characters, with the two women in the ensemble carrying a particularly heavy load. Joyah Spangler takes on three of the leading roles, “Emma Thompson,” “Laura Linney,” and “Natalie” (the love interest of “Hugh Grant”), while the extremely versatile Kaya Catan plays “Keira Knightley” and many others, including Samuel, the recently motherless young stepson of “Liam Neeson.” The joyfully zany Tony Tillman portrays Peter, the character played by Chiwetel Ejiofor in the film, as well as several other supporting characters. The McSmiths address Curtis’ relative neglect of minority characters with one lyric sung by Tillman: “There’s no romance for me anywhere in this movie. / I guess only white people find love in 2003.”

The other men in the cast all have plenty of opportunities to shine. Daniel Hayward’s primary character is “Liam Neeson,” but the actor also grazes on some apparently tasty scenery in his portrayal of the smarmy, washed-up rock singer played in the film by Bill Nighy, and he seems to be having a ball as “Emma Thompson”’s husband (a character played by the late Alan Rickman in the movie, but here given the garb and mannerisms of Professor Snape, Rickman’s character in the “Harry Potter” films). James Parks is notable for a deep and resounding singing voice in the role of “Colin Firth,” but he takes on a host of other parts as well, including some memorable turns in drag. The film’s putative starring role—the bachelor prime minister portrayed by Hugh Grant—goes here to the likable Eric Peters, who also plays “Colin God of Sex,” a randy young oaf who goes to America in order to meet, charm, and shag girls, relying on his supposedly “cute” British accent to get their attention. 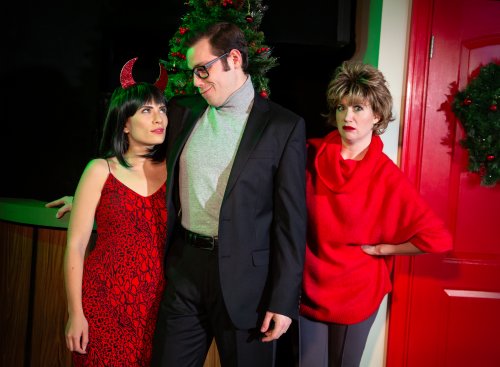 Ryan Howell’s set, with its wintry backdrop and red doors with wreaths, helps establish the show’s most salient aspects: Christmastime and London. The lighting design by Weston G. Wetzel helps make clear the many transitions from locale to locale. Dustin Cross’ daffy wigs and sharp-looking costumes make it easy to instantly recognize which character an actor is embodying at any given moment.

If you’re the sort who just can’t think of Christmastime in London without at least a dab of Charles Dickens, not to worry. Tiny Tim (played by Tillman) makes two cameo appearances in Love Actually?, during which he requests his customary seasonal blessing.