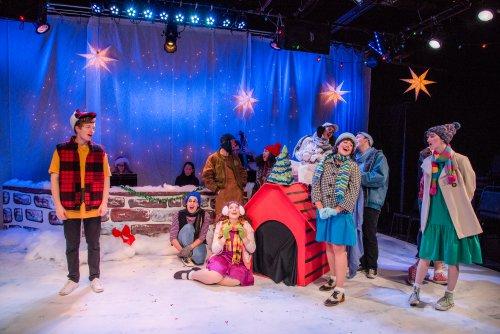 A scene from The Secret Theatre’s production of “A Charlie Brown Christmas” (Photo credit: Reiko Yanagi)

[Note: This is a review of the previous production with same production team. ]

Wearing a white outfit with black spots, a dangling tail and a white cap with floppy black ears, Devan Marie Corcoran as Snoopy gets the show off to a rollicking start. Ms. Corcoran’s tap dancing is sensational and her captivating, mostly silent presence is on display throughout.

Soft-spoken and morose, Patrick Dinnsen is a wonderfully touching Charlie Brown.  Michelle Owens is a winningly feisty Lucy.  The non-speaking role of the bird Woodstock is performed by rotating cast members and at the performance under review, James Chin vigorously appeared in a yellow outfit and a gold hat.

Vince Guaraldi’s monumental jazz themes are beautifully rendered by musical director Jenny Shiroma on piano, Laura Hamel on percussion and Billie Sholen on bass. This talented trio also performs marvelous renditions of a number of classic holiday numbers including “The Christmas Song,” Tchaikovsky’s “Dance of the Sugar Plum Fairy” from The Nutcracker, and “Silent Night.” Most crucially they do great justice to Mr. Guaraldi’s wistful “Christmas Time Is Here.”

The ensemble joyously darting around to catch snowflakes on their tongues is a grand highlight of director and choreographer Ashton Foster’s inventive staging. Ms. Foster’s treatment of the decorating of the pivotal Christmas tree is particularly accomplished. 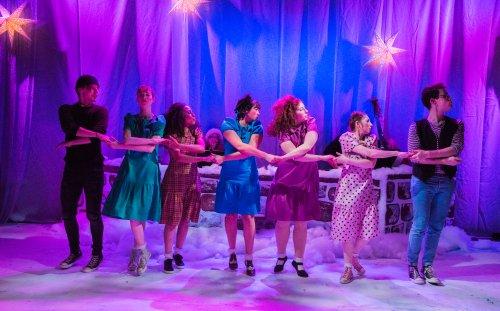 A scene from The Secret Theatre’s production of “A Charlie Brown Christmas” (Photo credit: Reiko Yanagi)

To boost the depressed Charlie Brown, Lucy instigates that he be the director of their school’s Christmas pageant.  A major issue is the selection of a Christmas tree for the show.  Will he select a lavish aluminum one or a scrawny real one?

The 25-minute long A Charlie Brown Christmas first aired on CBS on December 9, 1965. It was critically acclaimed with 45% of that night’s television audience watching it, and it was number two in the weekly ratings, coming  in after Bonanza.  It’s been rerun annually on network television and despite advancing technology these airings always get a sizeable viewership.

In producing this family fare for The Secret Theatre, Mr. Mazda, its artistic director, has successfully assembled all of the necessary elements for warm-hearted entertainment that’s a meaningful delight for children and adults.

The euphoric finale has the singers bringing young audience members onstage to dance as the band plays “Let it Snow,” “Winter Wonderland” and “Frosty The Snowman.”