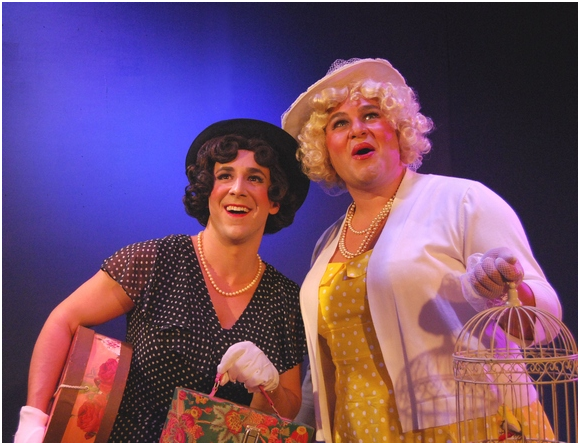 Josh Kenney and Nick Morrett in a scene from Fabulous! The Queen of New Musical Comedies (Photo credit: Rick Berube)

“…I’ve been having a love affair for quite a few years now. It’s been with the idea of recreating the golden age of Broadway—with its glitz and glamour—and making it relevant for today’s theater audience.” Writes Dan Derby, the book writer and lyricist of Fabulous! The Queen of New Musical Comedies, in the show’s program.

He and his collaborators have sought to create a fizzy spoof of lighthearted 1930’s Broadway musical comedies that overall succeeds. This is most evident during the fast paced second act which is a pleasurable jolt following the first act that drags with narrative convolutions. At two and half hours with an intermission, it did not feel as breezy as it was intended.

At the Paris dive drag Club La Merde Hole, we meet the drag team Laura Lee Handle and Jane Mann (“Mann Handle”) who get involved in Some Like It Hot-type complications and escape to an ocean liner, the Queen Ethel May, impersonating real women. On board are the stuffy British owner of the ship Sir Alfred Dooalot; gangsters in pursuit; the large, butch, cruise director Sylvia Smathers; Stewey the sarcastic steward; and Hollywood movie star Rock Henderson. Popping up throughout are also The Boys, a quartet of four young winsome chorus boys in sailor shirts and hats. 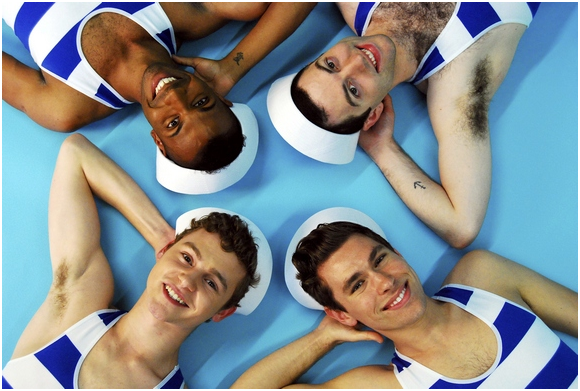 Mr. Derby and composer Michael Rheault have a fashioned a lively and often accomplished score that affectionately pays tribute to past shows such as Anything Goes. The song, “Take Me Back,” is a perfect, wistful homage to Cole Porter. Mr. Derby’s book is clever, often very funny, and subtly weaves in contemporary concern for gay tolerance but is never sententious. If streamlined, it would totally achieve its desired effect.

Set designer Kathleen Moriarty inventively represents the ocean liner by simple panels artfully painted and arranged on the walls of the small stage. The very fine costumes of Maya Graffagna range from striking beaded and sequined creations to simple nautical outfits that give the show an authentic look.

The work of director Rick Hamilton and choreographer Mary Lauren is inspired and imaginative, considering the confined playing area and they give the show flashes of visual brilliance. Highlights include a drag cancan number and a farcical slamming doors sequence. There are also numerous sight gags reminiscent of Blake Edwards’ best.

Nick Morrett and Josh Kenney are excellent as the drag duo and Mr. Kenney has a great La Cage aux Folles “I Am What I Am” number called “Just Me” alone at a mirror.

Tall, lithe, highly expressive young Cameron Lucas is magnetically charming as the far older Sir Alfred, and hilarious as the manager of the Paris nightclub. Highly talented, and with a winning presence, he is a standout of the show. 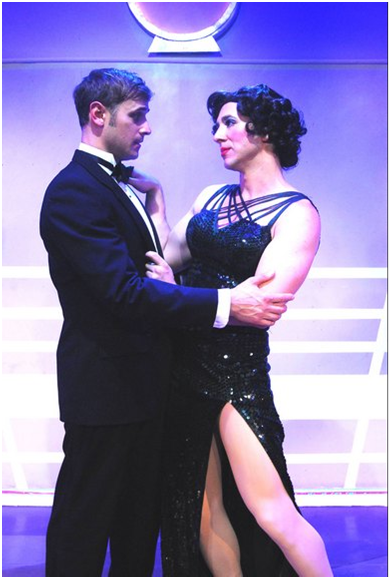 Adam Kemmerer and Josh Kenney in a scene from Fabulous! The Queen of New Musical Comedies (Photo credit: Rick Berube)

Fabulous! The Queen of New Musical Comedies could be frothier, but it’s still a delightful, nostalgic concoction with well placed contemporary overtones.

Fabulous! The Queen of New Musical Comedies (through January 5th, 2015)