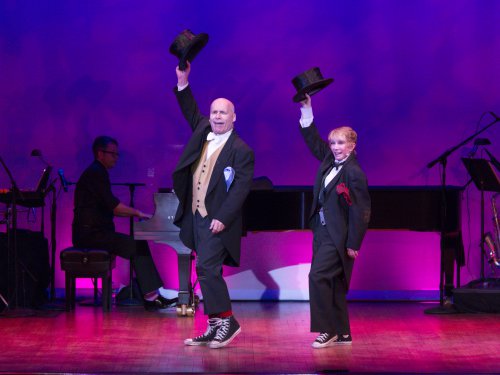 Sandy Duncan and Don Correia, wearing shabby tuxedos, top hats, and Converse high top sneakers, beautifully dancing and singing, “A Couple of Swells,” was one of the many highlights of the 92 Y’s Lyrics & Lyricists Series’ All Dancing! All Singing! Irving Berlin in Hollywood.

Ms. Duncan and her husband Mr. Correia vibrantly demonstrated why they have had such enduring careers in show business, which have included a number of appearances on Broadway.  Guest starring here, they effortlessly recreated that famous number from MGM’s 1948 Easter Parade, originally performed by Judy Garland and Fred Astaire, who replaced the injured Gene Kelly.  The tune itself dated from 1917, when it had the unpopular title and lyrics, “Smile, and Show Your Dimple.”

Mr. Correia also appeared with Randy Skinner, the series’ artistic director, who was responsible for this concert’s superb direction and choreography.  With him, the tall, lean, and graceful, Mr. Skinner danced and sang a sensational duet of “My Walking Stick,” from 1938’s Alexander’s Ragtime Band, with strategically used sticks.

The show was seamlessly unified by Barry Kleinbort’s very well researched and concise script.  Mr. Skinner and the cast would periodically read this very informative and precisely selected historical commentary from slim black binders that they held.

Irving Berlin (1888-1989) was born in Russia and came to the United States at the age of five with his family.  A New York City grade school dropout, he escaped poverty by becoming a singer waiter in Chinatown, and went on to write over 1500 songs of which 24 were performed at this breezy concert.  Much was made of how his immigrant background influenced the themes of patriotism and optimism in his work.

This celebratory event began with projected slides of Al Jolson in the first sound film, 1927’s, The Jazz Singer, with audio of him singing Berlin’s “Blue Skies.”  This illustrated that Berlin was part of talking pictures from the very beginning.

Then the show’s highly talented cast, Darien Crago, Danny Gardner, Drew Humphrey, Kristie Kerwin, Con O’Shea-Creal and Kristen Beth Williams, came out for a rollicking “Let Yourself Go,” from 1936’s Follow the Fleet.  With their accomplished singing and dancing skills, they periodically appeared throughout the show in various combinations, all together, and sometimes solo.

Since RKO Pictures was the Hollywood studio most agreeable to Berlin’s artistically and financially controlling terms, it was there he did a good deal of his legendary work. This meant he wrote the songs for many of the classic 1930’s musicals that starred Fred Astaire and Ginger Rogers. He also became enamored of the work of Mark Sandrich, who directed several of them.  A number of these RKO songs were well represented during the show. 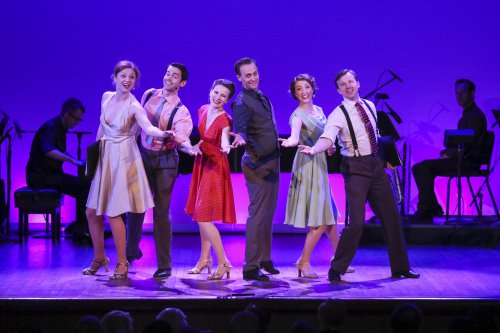 At 20th Century Fox, Berlin insisted on title credit, which he got for the 1939 flop, Irving Berlin’s Second Fiddle.  Starring Sonja Henie and Tyrone Power, it was a Hollywood satire about the search for the actress to play Scarlett O’Hara in Gone With The Wind. “I Poured My Heart into A Song,” “Back to Back,” were performed here, with “When Winter Comes,” played instrumentally by the band.

Nominated nine times for the Academy Award for Best Song, Berlin won once, for “White Christmas,” for Paramount Pictures’ 1942’s Holiday Inn.  Seemingly due to its familiarity, it was omitted here in place of two other holiday songs from that film.  “Plenty to Be Thankful For,” celebrating Thanksgiving, and “Be Careful, It’s My Heart,” for Valentine’s Day.  Kristen Beth Williams was very touching singing it.  She was equally effective on “Reaching for The Moon,” which was cut from 1930’s truncated film of the same name.

Also at Paramount Pictures in 1946, there was the fractious production, Blue Skies.  “You Keep Coming Back Like a Song” was included here.

Continuing at Paramount Pictures in 1954, Berlin wrote the songs for White Christmas. This was showcased with “Count Your Blessings Instead of Sheep,” “The Best Things Happen While You’re Dancing,” and “Love, You Didn’t Do Right by Me.”

Tap dancer extraordinaire Danny Gardner was joined by the estimable Humphrey and O’Shea-Creal, for the show stopping tap number, “Drum Crazy,” from 1948’s Easter Parade.  Alone, Mr. Gardner quietly sang, “A Man Chases a Girl (Until She Catches Him),” from 1954’s, There’s No Business Like Show Business for 20th Century Fox.

Most fascinating was the premiere of a song from a scuttled 1960’s biographical film musical about Berlin, Say It With Music.  “I Used to Play It By Ear” was a simple, wistful tune, with all of its author’s craft evident.

Described as a song about survival, and written in the depths of The Great Depression in 1936, the haunting “Let’s Face the Music and Dance,” from Follow the Fleet, performed by the cast was the finale.

On piano was music director, Fred Lassen, who led the smooth, often jazzy band of Louis B. Crocco on drums, and Harry Hassell and Chris Reza, both on woodwinds.  They all greatly realized the nearly 40-year span of variable material presented.

The superior collaboration of all the artists involved, made All Dancing! All Singing! Irving Berlin in Hollywood, a hugely successful and extremely delightful edition of the 92 Y’s Lyrics & Lyricists Series.