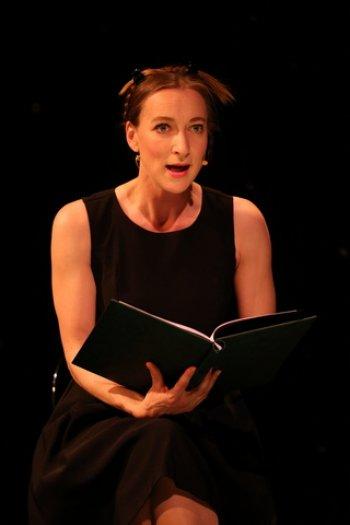 Somewhere between a tribute and a cabaret show, Julie Madly Deeply is a hardcore fan’s presentation of songs made popular by Julie Andrews as well as anecdotes about Andrews’ life. The charming Sarah-Louise Young isn’t trying to impersonate Andrews–nor does she–as much as she becomes a fan personified.

Andrews’ worldwide success with the films The Sound of Music and Mary Poppins is well represented here, as is the Broadway musical that established her in the first place, My Fair Lady, even if The Boyfriend preceded it. The current run of Julie Madly Deeply at 59E59 Theaters follows its playing first in London’s West End and then in Toronto. It was written by Young, with contributions from Russell Lucas, who has also directed the show in a full-steam-ahead mode.

There are further contributions by music director and arranger Michael Roulston, the purple-suited pianist who arrives and formally bows, before sitting down at the piano and opening with a medley of several of Andrew’s most famous songs. Then Young arrives, clad in a simple black dress, with floral belt (costumes by Anne Braithwiate), belting out “Lonely Goatherd” with her strong soprano voice, before announcing, “I am not Julie Andrews” and “Nobody has ever touched me like Julie Andrews.” 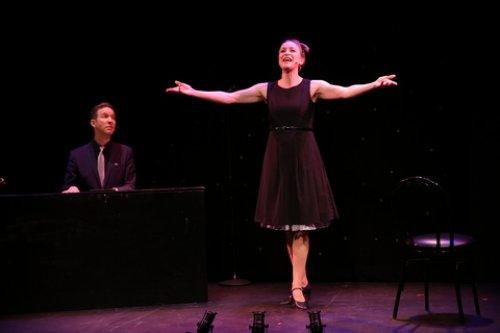 Young, who shortly will implore us to use our “fertile imaginations,” also immediately begins what will amount to an evening of audience interaction or participation by saying, “Each and everyone of us here, we are all her children.” And even though most in the audience seemed to know a lot about Andrews, it was surprising for some of us to learn that she had three fathers, two husbands, and five children, including two adopted Vietnamese babies. (I was only aware of her daughter, Emma, with whom Andrews has written a number of books for children.)

It’s also surprising to learn that when Andrews kept trying to break out of her “mold,” she even recorded a country duet with Johnny Cash. She also attempted to alter her goody-two-shoes image by making The Americanization of Emily with James Garner, who figures in Young’s patter, and who Andrews co-starred with later in Victor Victoria. If nothing else, Julie Madly Deeply reminds us of just how many films Andrews made, including Hawaii, Chitty, Chitty, Bang, Bang, Thoroughly Modern Millie, The Princess Diaries, and S.O.B., among many others. 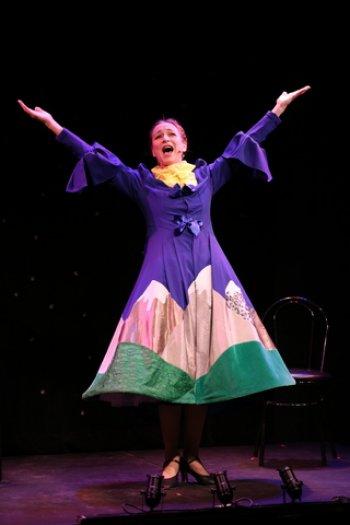 Whether or not she was attempting to impersonate Andrews, Young does give a decent impression of Liza Minnelli, singing “Jazz Hot Baby” from Victor Victoria–the Broadway version of which Minnelli stepped in, when Andrews was ill.

There is also a certain amount of self-deprecating humor, when, for example, Young says, “I’m much, much prettier when you’ve had a drink,” and encourages us to bring one back to our seats, following the intermission.

In the end, after Young says, “Nobody can sing like Julie Andrews,” she and Roulston leave the stage only to return for an encore–another medley of Andrews’ hits including “A Spoonful of Sugar,” “Sixteen Going on Seventeen,” “Wouldn’t it Be Loverly,” and “Supercalifragilisticexpialidocious!” It’s a fitting close to a delightful evening.

Running time: one hour and 50 minutes including an intermission