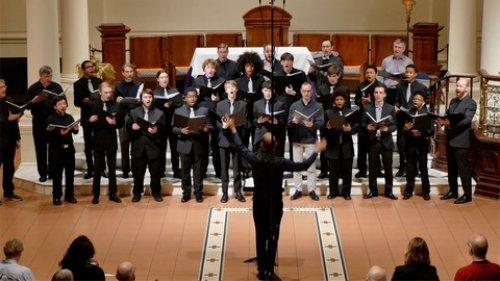 The Choral Composer/Conductor Collective, better known as C4, presented a late-winter concert that featured both its usual strengths – collaboratively presented, compelling performances of contemporary choral music and daring commitment to new compositions – and an exciting new partnership. For three of its six world premiere works, C4 was joined by the Brooklyn Youth Chorus Men’s Ensemble, a group whose mission and goals are closely consonant with C4’s.

The evening’s works were loosely organized around the theme of devotion, a big conceptual basket into which works about reverence, affection, awe and loves of all sorts could deftly and effectively be fit. Although the concert’s texts ranged from ancient to contemporary, from sacred to profane, from unknown to known authorship, the considered objects of affection included peace, nature, mystery, creativity, divinity – all love’s siblings – and love itself.

The first half of the concert consisted of five works, including two world premieres by current C4 members. Heavy, Like Water, by Joseph Prestamo, was set to poems “When It Rains” and “Elegy” by West Coast poet Brandon Jordan Brown. Themes of interconnected grief and joy were reflected in musical chords of only ambivalent resolution. As might be expected from a composer who is himself a tenor, the writing for tenor voice was especially beautiful: the line “Yes, it’s beginning to be the only thing I can see” was marvelous. The 11 minute work might have benefitted from some tightening in the second half of the first movement, but its quiet conclusion was strong.

The second world premiere in the first half of the program was Hayes Biggs’ who are you?, a richly complex piece set to a linguistically dense and rewarding poem by frequent C4 artistic collaborator Zsuzsanna Ardó. Although the work features cerebral speculations on an elusive “identity vortex of time and space,” this work for women’s voices follows musical ideas divergently, giving them each wide individual travel space before bringing them back together in an intellectually satisfying conclusion. The chamber choir for this piece consisted of 11 women; the soloists, Karen Siegel and Rebecca Ehren, sopranos, and Maya Ben-Meir and Jamie Klenetsky Fay, altos, were particularly fine. 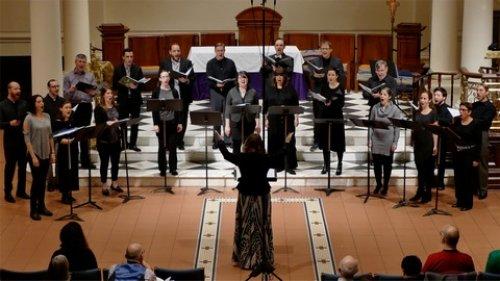 The third world premiere in the first half of the concert was current C4 singer Carlos Pérez Tabares’ Simple Motets, a short setting of two familiar ancient Christian texts, Ave, Regina Caelorum and Cantate Domino. Though the music is more complex than might be singable by choirs of all levels – a goal Tabares indicated he was aiming for – the work was pleasingly accessible, alternating between intimate directness and inviting lightness. The concluding flourish emphasized the joy of the two prayer texts.

The other pieces of the concert’s first half included works by Peter Louis van Dijk and Gilad Cohen, both set to Old Testament texts, and sung with the particular affinity that C4 has for musical literature inspired by ancient Hebrew poetry.

The first half of this concert was very good. The second was thoroughly marvelous: the concluding piece, Vier geistliche Gesänge – beautifully performed by C4 and written by well-known contemporary German composer Wolfram Buchenberg provided a satisfying shape to the evening as a whole by offering a quasi-liturgical presentation of Christian love. But the real triumph of the evening belonged to the Brooklyn Youth Chorus Men’s Ensemble and the three works – world premieres – composed for them by three long-standing current C4 members.

Founded in 1992 and currently incorporating afterschool programs for more than 600 students enrolled in multi-level musical training divisions and advanced choral programs (http://www.brooklynyouthchorus.org), the Brooklyn Youth Chorus has long successfully realized its goals of artistic integrity and effective collaboration with a wide variety of organizations. Kristopher Burke, a member of the Brooklyn Youth Chorus administrative staff since 2011, is now conductor of the Men’s Ensemble and Men’s Training Division. Burke is also a former member of C4 and, as such, was in a particularly strong position to create the close collaborative coherence of the Brooklyn Youth Chorus Men’s Ensemble participation in this C4 concert. 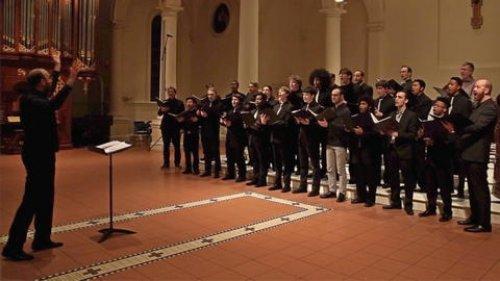 The second half of the concert opened with the fifteen boys and men of the Brooklyn group; ranging in age from twelve to eighteen, they were conducted in all three pieces they sang – the first two on their own, and the third with the men of C4 – by Burke. The first piece was Karen Siegel’s Infinite Hour. This five-minute work, based on a poem by Siegel herself, examines questions of purpose and being “in the force of gravity and dark energy.” The act of questioning itself becomes, for Siegel, a form of prayer, and her sophisticated musical writing, matching harmonic expressivity to the themes of her texts, made this a work right in the center of the concert’s focus on devotion.

In Jamie Klenetsky Fay’s I remain, based on one of her own poems, a chantlike element provided a context for the slow marcato emphasis on the text – “I remain for the world” – and made for musically gorgeous textures.

For Martha Sullivan’s Devotion, based on an excerpt of Wallace Stevens’ luminous 1923 Sunday Morning, the Brooklyn boys and young men sang with the C4 tenors and basses. Devotion both presented and embodied a lush, Romantic sound as a form of worship: words and men raised up a “chant of paradise … returning to the sky.” Though only four minutes long, this profound piece is one of Sullivan’s best to date.

All three of these C4 composers demonstrated a keenly attuned ear for the singers for whom they were writing: they captured and illuminated that particular moment of young manhood’s new wisdom when the just-recently-changed voices of young men still retain the childhood innocence that foreshadows wisdom. Siegel, Fay and Sullivan have all written music that highlights both the vulnerabilities and strengths of these voices, using these characteristics to enrich the meanings of the texts they’re setting to music.  The three pieces together formed a fabulous musical triptych.

By itself, C4 contributes in a major way to the wealth and diversity of the New York City cultural landscape. With collaborations as successful as this winter’s one with the Brooklyn Youth Chorus Men’s Ensemble, the C4 contribution to New York City was additionally and felicitously expanded.

Church of the Holy Apostles

Running time: one hour and 40 minutes including one intermission.