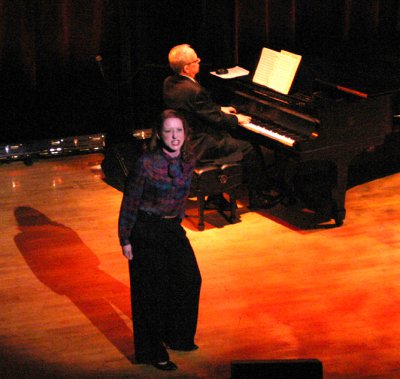 Molly Pope as she sang Cole Porter’s”Too Darn Hot” at “Broadway by the Year: The Broadway Musicals of 1941-1965” (Photo credit: Michael Portantiere)

“Too Darn Hot,” by Cole Porter from the 1948 musical Kiss Me Kate, as dazzlingly performed “unplugged,” meaning without musical accompaniment, by Molly Pope, was one of the most pleasurable highlights of Broadway by the Year: The Broadway Musicals of 1941-1965.

Long, lean, and wearing a plaid blouse tucked into billowing black slacks, with flowing red hair, the offbeat Ms. Pope actually looked like she was a star from the 1940’s.  Her quirky delivery and great vocal range, perfectly enunciated every risqué word, as well as conveying the song’s humor with an at times serious edge.  She was sensational.  Historically the song is notable as it does not advance or contribute to the show’s plot.

Created and written by Scott Siegel, this series of historical survey concerts of Broadway musicals is in its 15th season.  The structure is that a song from a selected musical from each year is performed.  This edition was laden with outstanding numbers by a tremendously talented cast.

The genial Mr. Siegel was also the host.  Reading his well-researched and entertaining commentary, he imparted facts and anecdotes between songs.  The theme was how over this quarter of a century, the Broadway musical evolved in terms of style, content and sound, yet remained the same. 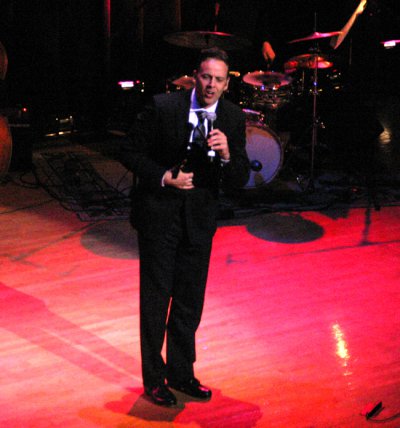 Noah Racey as he sang Cole Porter’s “It’s All Right With Me” at “Broadway by the Year: The Broadway Musicals of 1941-1965” (Photo credit: Michael Portantiere)

Other standout performances included Noah Racey, suavely singing “It’s All Right With Me,” by Cole Porter from the 1953 musical Can-Can. Later into it, he also performed and choreographed a commanding tap dance.  This was the rousing finale to the show’s first act.

Beth Leavel powerfully brought out all of the bluesy aspects of “Blues in The Night,” originally from the 1941 film of the same name.  Immensely popular it was nominated for The Academy Award for Best Song, and was later incorporated into the Broadway revue, Priorities of 1942.

Liz Callaway’s wistful, “Look to The Rainbow,” from 1947’s Finian’s Rainbow, was among the best renditions ever heard of it.  Equally revelatory was Jenny Lee Stern’s emotionally rich “As Long As He Needs Me,” from 1963’s Oliver.  The original Broadway production got a big boost in ticket sales after the cast performed on the same episode of The Ed Sullivan Show that The Beatles made their first live television appearance in The United States.

Following her lovely vocalized, “I Could Have Dance All Night,” from 1956’s My Fair Lady, Alexandra Silber was then joined by Ryan Silverman, for a very compelling, “Tonight,” from 1957’s West Side Story, with dialogue from the show also performed.  Mr. Silverman later closed the concert with the striking title song of 1965’s On A Clear Day You Can See Forever. 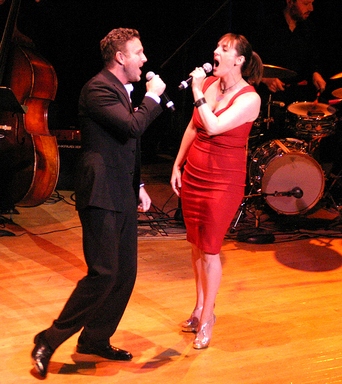 Ben Davis and Julia Murney as they sang “Once There Was  Man”  from “The Pajama Game” at “Broadway by the Year: The Broadway  Musicals of 1941-1965” (Photo credit: Michael Portantiere)

Julia Murney wonderfully sang “Right As Rain,” from 1946’s Bloomer Girl.  Later in the show she and Ben Davis did a rollicking “There Once Was a Man,” from 1954’s The Pajama Game.  Then Mr. Davis, with his leading man good looks, performed a slyly sensual “All of You,” from 1955’s Silk Stockings.

Delightful, pure comedy was represented by KT Sullivan’s “I’m Just a Little Girl From Little Rock,” from 1949’s Gentleman Prefer Blondes, “I Enjoy Being a Girl,” from 1958’s Flower Drum Song, by Kelli Rabke, “I Believe in You,” from 1961’s How To Succeed in Business Without Really Trying, by Jeremy Morse, and “Don Jose (of Far Rockaway),” from 1952’s Wish You Were Here, by Steve Rosen.  That show also received a box office jolt from its cast’s appearance on Ed Sullivan’s television variety show The Toast of The Town early in it’s run.

The familiar title song of 1943’s Oklahoma! was energetically and hilariously performed by John Bolton in several foreign languages including German and Japanese. 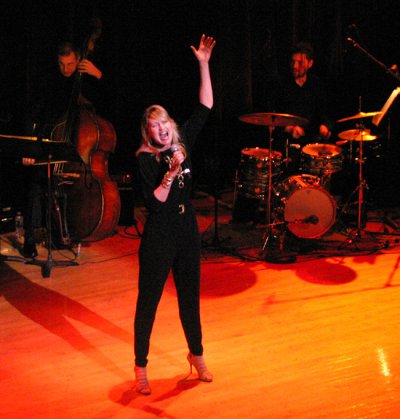 Luba Mason as she sang Harold Arlen’s”Come Rain or Come Shine” at “Broadway by the Year: The Broadway Musicals of 1941-1965” (Photo credit: Michael Portantiere)

Performances that very effectively scored in dramatic songs were Jeff McCarthy’s “Once Upon a Time,” from 1962’s All American, Luba Mason’s “Come Rain or Come Shine,” from 1946’s St. Louis Woman, and Ian Knauer’s “Make Someone Happy,” from 1960’s Do Re Mi.

Cabaret veterans Jeff Harnar and Karen Oberlin made welcome and terrific appearances.  He sang “They Couldn’t Compare to You,” from 1950’s Out of This World, and she sang “Here’s to Your Illusions,” from 1951’s Falhooley.

Though too young to transmit the life experience of the characters they portrayed in their numbers, promising newcomers Jenna Dallacco and Graham Bailey both did very fine renditions of their songs.  She sang “Small World,” from 1959’s Gypsy, and he sang “What Kind of Fool Am I?” from 1962’s Stop The World–I Want to Get Off.

The Broadway by the Year Chorus, an ensemble of up and coming performers, selected through annual auditions, opened the concert with the hastily written W.W. II patriotic number, “We Did It Before (And We Can Do it Again),” from 1941’s Banjo Eyes, staged by Vibecke Dahle.  They also joined Lari White for a stirring “You’ll Never Walk Alone,” from 1945’s Carrousel. 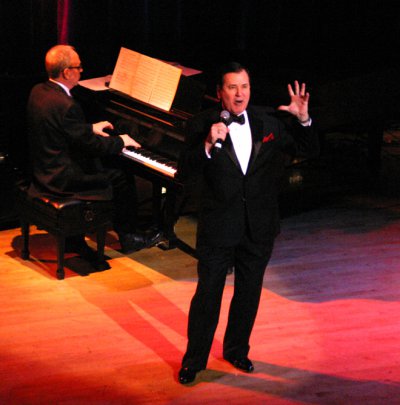 Lee Roy Reams as he sang a medley of songs from Jerry Herman’s “Hello, Dolly!” at “Broadway by the Year: The Broadway Musicals of 1941-1965” (Photo credit: Michael Portantiere)

There was a moving sense of history as Lee Roy Reams performed a medley of songs from 1964’s Hello Dolly!  In the 1978 revival he played the wide-eyed, young Cornelius Hackl, and he directed and choreographed the 1995-1996 revival starring Carol Channing.

Integral to the event’s success was the virtuosity of the band that proficiently performed in eclectic styles in the course of covering 25 years of Broadway’s changing sound.  Musical director and arranger, Ross Patterson was on piano, Tom Hubbard was on bass, and Jamie Elban was on drums.

The presentation of the performances had a cumulative momentum due to the accomplished direction.  That also turned out to be the work of Scott Siegel, in his remarkable debut in that capacity.

In the course of Mr. Siegel’s erudite remarks, the work of key figures responsible for these often classic musicals recurred.  Composer and lyricist Cole Porter was represented by four shows, composer Richard Rodgers and lyricist Oscar Hammerstein II by three shows, as was composer Jule Styne.  Most monumental was the achievement of legendary producer David Merrick who was responsible for bringing five of the shows to Broadway.

The combination of Mr. Siegel’s personable presence, his insightful tidbits and adept direction, along with the illustrative song selections matched with superior performers, all made this version of Broadway by the Year: The Broadway Musicals of 1941-1965, a paramount chapter in the series.