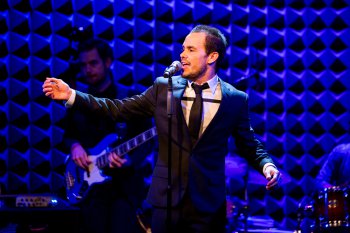 Dynamic performer Migguel Anggelo exhilaratingly recalls the showmanship of Desi Arnaz and the performance art of Klaus Nomi in his terrific autobiographical cabaret act, Another Son of Venezuela, that has the razzle dazzle of a Bob Fosse production.

“I feel so lucky every morning when I wake up here in New York City.  I feel so safe,” wistfully declares Mr. Anggelo during this fast paced 65-minute musical chronicle of his life that began in Venezuela before he immigrated to the United States 13 years ago.

The eclectic program includes numbers by George Michael, Rodgers and Hammerstein, Puccini, Leslie Bricusse and Anthony Newley, as well as several of his own Mambo compositions.

Wearing a black suit, white shirt and a black tie, Anggelo uses his evening to showcase his tremendous vocal range, sensational dancing and charming sensual physicality.  His comic timing is impeccable especially when engaging audience members about Miss Universe.  He comically recounted first arriving in Miami and how Gloria and Emilio Estefan dominate that city. His dramatic delivery is equally as accomplished.

“I’d rather have a prostitute daughter then a gay son,” he chillingly quotes his father.  As a boy,Anggelo was obsessed with Alice in Wonderland, dance classes and Pinocchio and those memories led to a moving rendition of “When You Wish Upon A Star” in Spanish.

“The Germans love the Spanish.  I was like a tropical toucan,” he remarked as he told of his Jewish grandfather who fled Germany in 1938, as well as fulfilling his promise to visit his ancestral homeland.  As an impoverished visitor in Cologne, Anggelo subsisted by busking in the streets.  This was the setup to a Cabaret style sequence where from prop suitcases he produced and changed into different costumes. 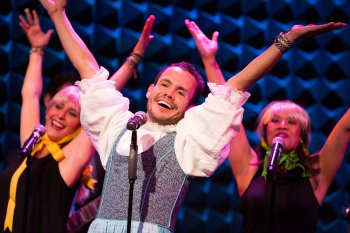 Migguel Anggelo and The Immigrants as they perform “The Lonely Goatherd” in “Another Son of Venezuela” (Photo credit: David Andrako)

Wearing a  feathered red cape with a red-feathered hood, Anggelo performed a thrilling “Malambo,” a song popularized by Yma Sumac, the exotic Peruvian-American soprano known for her eight-octave range.  In a blonde wig and The Sound of Music style dress, he hilariously sang and yodeled “The Lonely Goatherd” from that show.

The gorgeous and very talented backup singers Joanne Jovien and Michelle Walter add considerably to the show’s success.  Ms. Jovien is from The Philippines and Michelle Walter is from Guatemala, so the theme of immigrants was even more reinforced.   Their chemistry and bantering with Anggelo is delightful.

The assured musical director Mau Quiros on keyboards led the sensational band which is comprised of James Quinlan on bass, Tim Basom on guitar, Jake Golbas on drums and Ivan Llanes on percussion.

David Drake developed Another Son of Venezuela with Anggelo and directed it.  Mr. Drake has shaped and staged the material into a snappy, informative and very entertaining presentation.  The show is further enhanced by the varied and striking lighting that gives it a compelling theatrical quality.

The dramatic encore was “Cucurrucucu Paloma,” the Mexican song about a dove, that Anggelo performed wearing a long white coat decorated with colorful birds.  It was dedicated at the performance attended to the recently deceased Prince who was known for among many things his song “When Doves Cry.”