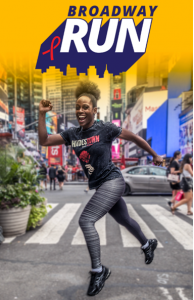 And the fun isn’t over. Registration for the virtual Broadway Run has been extended to midnight Eastern on November 30, 2019, allowing theater fans around the world to run, walk, leap or jeté for the cause. There are more than 270 participants currently registered, spanning 32 states and four continents.

Learn more about the virtual Broadway Run and register at broadwaycares.org/run.

The virtual Broadway Run is a race that can be completed from any place, at any pace, and all proceeds benefit Broadway Cares. Participants will receive a limited edition medal to commemorate the experience. The platinum medal, which spins like a Tony Award and pays homage to Broadway’s biggest honor, features a team of runners in New York City’s famed Theatre District, surrounded by classic marquees.

The Broadway Run is a 3.1-mile walk or run through the streets of Manhattan that ends at the famed New York City marathon finish line in Central Park as part of the Abbott Dash to the Finish Line 5K. This year’s Broadway Run, held Saturday, November 2, 2019, featured more than 120 participants, including company members from Dear Evan Hansen, Fiddler on the Roof – in Yiddish, Frozen, Hadestown and To Kill a Mockingbird.

Broadway Cares/Equity Fights AIDS is one of the nation’s leading industry-based, nonprofit AIDS fundraising and grant-making organizations. By drawing upon the talents, resources, and generosity of the American theatre community, since 1988 Broadway Cares/Equity Fights AIDS has raised more than $300 million for essential services for people with AIDS and other critical illnesses across the United States.

Broadway Cares/Equity Fights AIDS is the major supporter of the social service programs at The Actors Fund, including the HIV/AIDS Initiative, the Phyllis Newman Women’s Health Initiative and the Samuel J. Friedman Health Center for the Performing Arts. Broadway Cares also awards annual grants to more than 450 AIDS and family service organizations in all 50 states, Puerto Rico and Washington, D.C., providing lifesaving medication, healthy meals, counseling and emergency assistance.
For more information, please visit Broadway Cares online at broadwaycares.org, at facebook.com/BCEFA, at instagram.com/BCEFA, at twitter.com/BCEFA and at youtube.com/BCEFA.