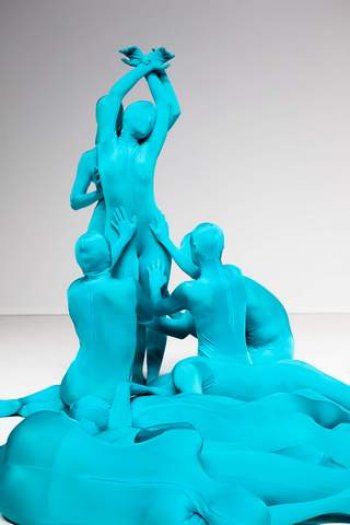 Last seen in New York in 2017, Danish choreographer Mette Ingvartsen has brought a newish work, to come (extended) to NYU Skirball Center.  To come (extended) is actually a reworking and expansion of an earlier work. Unfortunately, Ms. Ingvartsen appears to be in a rut, a deep, monotonous sexual rut.

She considers herself the one-woman expert analyzer of all things sexual via her repetitive choreography.  Indeed, her work includes nudity and explicit sexuality (all forms of intercourse between every combination of genders, oral sex, group sex, etc.) all extremely unexciting, in fact, quite boring.

All this was performed in silence with a sudden blast of sound causing the only rise in heart rates of the evening. 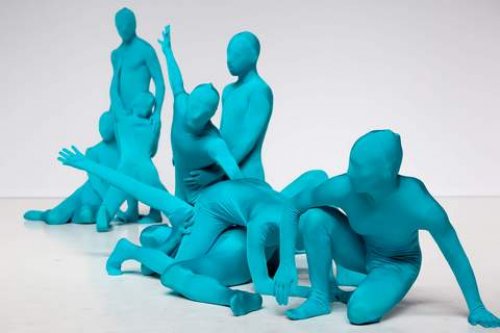 Part Two was performed before an immense turquoise curtain drawn about the borders of the stage space.  Suddenly a sadistically electronically distorted version of Benny Goodman’s classic “Sing, Sing, Sing” blasted from the speakers while the now totally nude dancers performed feebly awkward Lindy-Hop steps (wanly  choreographed by Jill De Muelenaere and Clinton Stringer).  All the expected loose body bits and pieces flew in all directions.

The dancers deserve credit for their unabashed, if gawky renditions of this classic American dance, but images of Bob Fosse’s zesty choreography to the same music form swept through my—by then—desperately bored brain.

Ingvartsen has absolutely no sense of structure.  There was no climax (so to speak), just 55 long, l-o-n-g minutes of adolescent creative playtime, with 18 beautiful bodies laid (!) out for the audience’s prurient perusal.

Jens Sethzman’s brilliant lighting did what it could to make the presentation palatable.

Running time:  55 minutes without an intermission