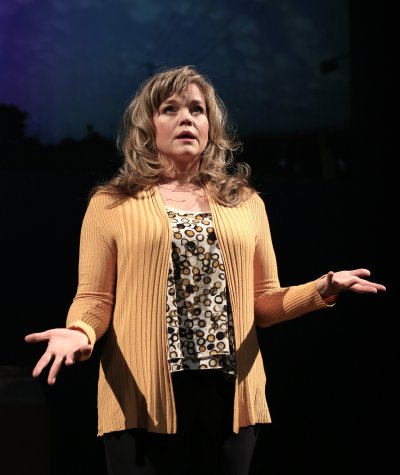 Ana Reeder in a scene from “When It’s You” (Photo credit: Carol Rosegg)

Ana Reeder powerfully performs this 70-minute solo play that explores the issue of gun violence in The United States.

In When It’s You, playwright Courtney Baron vividly uses the monologue form to present the depressed, but cheery Ginnifer’s chronicle as she talks to and occasionally addresses the audience directly.

She is 37 years old, single and has moved back to Dallas, from St. Louis.  She returned to her hometown to be with her mother, who had cancer and has since died.  Her father abandoned the family when she was four years old, and her brother lives in another state.

Two weeks before the play begins, a man went on a shooting spree in a parking lot, killing four people and wounding seven, who were between ages of 26, to 68 years old.  He turns out be her high school boyfriend of six months, whom she hasn’t seen in 20 years.

Ms. Baron very skillfully imparts all of the pieces of information in precise increments, weaving them together with biographical as well as mundane details.  The result is an engrossing depiction of Ginnifer, as well as a measured but clear support of gun control.

The tone is never strident, but Baron’s stance is evident.  The writing though is so accomplished that it could succeed just as a theatrical portrait without that plot point or any political agenda. It’s also a fine vehicle for an excellent actress and it has that with Ms. Reeder. 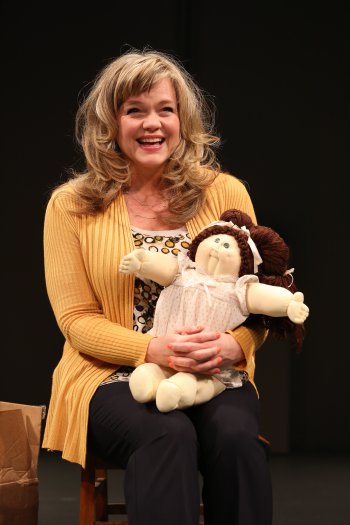 Ana Reeder in a scene from “When It’s You” (Photo credit: Carol Rosegg)

Director Jonathan Silverstein staging is functional but inspired, adding an energetic pace to the production.  Mr. Silverstein artfully places Reeder in a variety of areas of the small stage and highlights Reeder’s performance with high caliber technical elements.

Part character study and part agitprop, When It’s You is totally absorbing.

The Clurman Theatre at Theatre Row