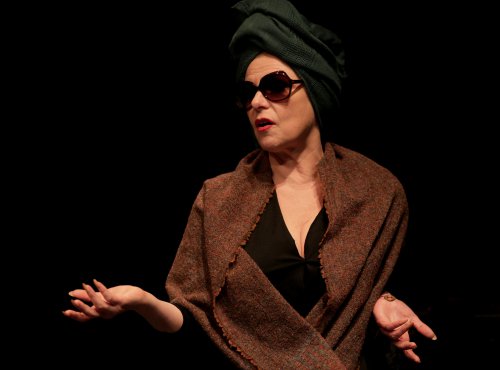 Turning Page is an intense, affectionate and impressionistic 90-minute biographical solo show that Ms. Page wrote and performs. Page fiercely focuses on herself as well as her mother. The consequences of their intertwined relationship are a major theme of the work, as is behind the scenes of show business.

The stage is set and divided into three areas with a strategic jumble of vintage trunks, chairs, hatboxes, props and clothes.  It is a perfect and instantly clear landscape for the outpouring of memories that are enacted.

“My mother’s been haunting me,” declares Ms. Page at the start of the production, following a projection of home movies on the back wall of the stage of her as a child with her mother.

Her hair cut short, and wearing a black dress, Ms. Page physically transforms herself with accessories, and channels her mother’s presence with her delightfully accurate impersonation that will enrapture admirers of Geraldine Page. 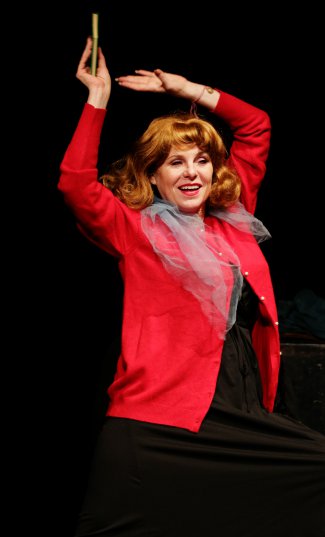 Ill with kidney disease, Geraldine Page was working on her autobiography before her death in 1987, at the age of 62.  Aware that she wouldn’t be able to finish it, she deputized the 23 year-old Angelica to do so.  “Don’t make me out as a saint…”

Frustrated by her inability to write, and that no one else wrote a biography of her mother, and that there has been no American Masters television documentary about her or a star on The Hollywood Walk of Fame for her, Ms. Page has been working on this show for over six years.  This came about due to consulting with a London psychic, and excerpts of their conversations are played.

“Just try it!” was Geraldine Page’s encouragement to her daughter to be an actress, as Angelica was not interested in it.  Initially a photographer, a caterer and married with a stable home life, she eventually did, after being inspired by the performances of her mother and Amanda Plummer in the Broadway production of the play Agnes of God. She eventually established a distinguished performing career in her own right.

Beginning with a sequence about Woody Allen’s 1978 film Interiors in which Geraldine appeared, Angelica tells many stories told about her mother’s illustrious career.  Her star making performance in the 1952, Off-Broadway revival of Tennessee Williams’ Summer and Smoke is detailed.  That began a friendship with Mr. Williams, and she was in his play Sweet Bird of Youth on Broadway with Paul Newman in 1959.  The failure of his last Broadway play, Clothes for a Summer Hotel in 1980, where she played Zelda Fitzgerald is sadly recounted.

Also chronicled is her close relationship with James Dean that began during a Broadway play, André Gide’s The Immoralist, in which they appeared together. Then came the Hollywood Western Hondo, starring a cantankerous John Wayne in 1954, for which she is nominated for The Academy Award for Best Supporting Actress, and movie stardom in the 1960’s. 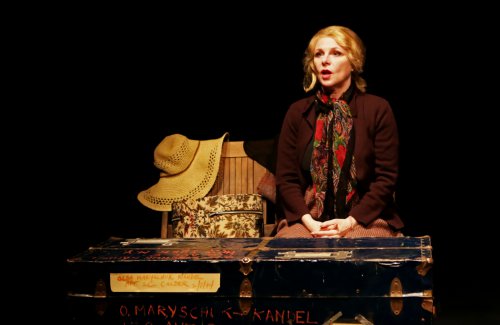 Much is made of her numerous Oscar nominations, and this reaches a wonderfully presented climax. She finally wins the award for Best Actress on her eighth nomination for the 1985 screen adaptation of Horton Foote’s play, The Trip to Bountiful.   “Is that per week?”  “No. That’s for the whole thing,” was Geraldine Page’s agent’s incredulous reaction to the low salary that was offered for it.

They met in 1955, while married to others, and married in 1961.  Despite his alcoholism, serial infidelity and a child out of wedlock, they remained married until her death.  “The sex was great!”

Mr. Torn is Ms. Page’s father, and late in life she legally changed her surname to that of her mother’s.

“You will die! If you perform in that play,” a doctor warns the ailing Geraldine Page about acting in a Broadway revival of Noël Coward’s Blithe Spirit. She does the play anyway and performs in it for over three months. Nominated for a fourth Tony Award for her role as Madame Arcati, she doesn’t win. Less then a week after the ceremony, while the show is still running, she dies.

Geraldine Page was born in 1924, in rural Missouri to emotionally distant parents.  When she was five, the family moved to Chicago, where she later studied acting at the Goodman Theater.  In her later years she co-founded an Off-Broadway repertory company where she performed in classic plays and taught acting in New York City.  “I have other virtues,” was her defense of the renowned lax housekeeping of her Chelsea townhouse.

“Okay, Mom, I did what you asked…I finished your book…. I became an actress…you’re right.  It is a delicious life,” euphorically states Angelica Page at the conclusion of her revelatory and engrossing Turning Page.