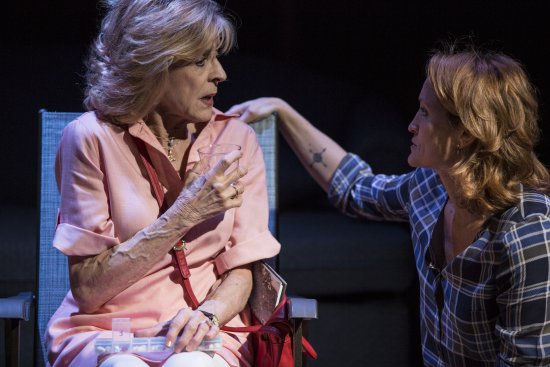 Concetta Tomei and Angela Reed in a scene from “The Mother of Invention” (Photo credit: Maria Baranova)

Overly offbeat, strained and not as funny as intended, The Mother of Invention is a dark, dysfunctional family comedy that’s crammed with arch plot points. Containing uneven performances, straightforward direction and clogged with symbolism, it’s a long 95 minutes.

Playwright James Lecesne has been acclaimed for his solo performance works, most recently The Absolute Brightness of Leonard Pelkey.  Here, he has written a traditional play employing theatrical devices that’s a mélange of David Sedaris, Charles Busch and Modern Family.  There are one-liners galore, wacky situations and a decidedly campy sensibility.  It’s a bunch of superficial antics that never really meaningfully connect.

Set in “a home somewhere in Central Florida,” we meet the Nerber family.  Dottie, is a widowed retiree in her 70’s who has Alzheimer’s Disease.  Her daughter Leanne is there to oversee the packing up and sale of the family home.  Dottie’s condition has reached the point where she is being placed in an assisted living facility in Tucson, Arizona.  She’s has been told she’s going away to attend a wedding.  Her journal with its shocking revelations figures prominently in the goings-on.

There is also the conceit that has Dottie appearing in scenes she’s not actually in, commenting on the events.  It takes awhile to grasp this.

Leanne’s precocious young daughter Ryder is there as well.  Leanne’s gay brother David arrives from Los Angeles to help with their mother.  He is a successful children’s book author in a rocky relationship with the screenwriter Clayton who is having an affair with his personal trainer, Jorge.  There’s discord as David has recently published an autobiographical novella that distorts the family’s history. 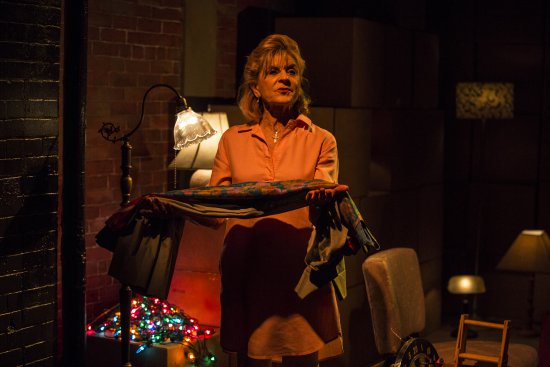 Concetta Tomei in a scene from “The Mother of Invention” (Photo credit: Maria Baranova)

Also wafting in and out of the action is Dottie’s kooky neighbor Jane who’s fixated on terrorist threats.  In addition, there is the hunky Columbian grave robber (yes) Frankie Reyes, who befriended Dottie after she caused a car accident he was involved in.  A plot development has him appear totally nude.

Adhering to Mr. Lecesne’s stage directions, scenic designer Jo Winiarski has constructed a house made of square, brown moving boxes.  Some of these frequently get taken away, or rearranged and this becomes a wan exercise in symbolism.  The living room is also set with Hummel figurines, vases and Christmas lights.

Director Tony Speciale’s physical staging of the action is fine, but doesn’t achieve the heightened zaniness this self-consciously absurd material, striving for profundity aims for.  The casting for these flimsy characters is problematic.

The charming Concetta Tomei gives an excellent performance as Dottie.  Ms. Tomei conveys all of the humor and poignancy the role requires.  A charismatic star performer however, would have brought the sparks needed to energize the shaky material.

Angela Reed is compelling, realistic and fierce as Leanne and anchors the production with her sustained appeal. 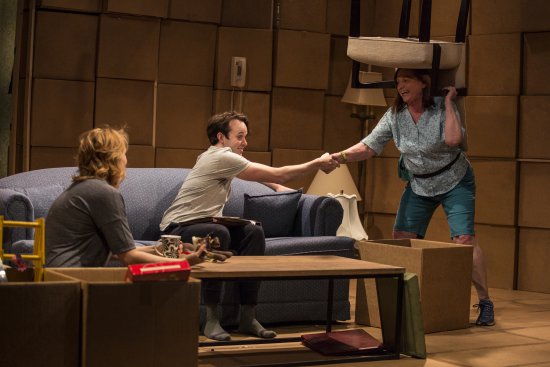 Angela Reed, James Davis and Dale Soules in a scene from “The Mother of Invention” (Photo credit: Maria Baranova)

The always delightfully idiosyncratic Dale Soules makes the most of the nutty neighbor role of Jane. With her gravelly voice, superior comic timing and warm presence she is highly enjoyable.  Ms. Soules has the bonus of another part, a homeless woman who was once a concert pianist, with whom Dottie makes the acquaintance.  Soules delivers a heartbreaking speech about auditioning for Michel Legrand to play for the Los Angeles Philharmonic.  This leads to a stirring rendition of Legrand’s Oscar winning song “The Windmills of Your Mind” by her and Ms. Tomei.

Using an Antonio Banderas-style accent, the animated Dan Domingues does his best to bring credibility to the feverishly conceived character of the Columbian grave robber and nationalist, Frankie Reyes.  Though Mr. Domingues’ physique is exceptional, it is jarring when he disrobes for his gratuitous nude scene.

Isabella Russo is suitably annoying in the cliché role of the annoying child, Ryder.

The amiable James Davis is monotonous as David and doesn’t make much of an impression.

Daisy Long’s lighting design and Christian Frederickson’s sound design are both proficient and are busy punctuating the numerous scene changes with blackouts and music.  Paul Marlow’s costume design authentically represents all of these contemporary characters.

From its expositional opening moments with Dottie and Leanne bickering, The Mother of Invention is off-kilter. By its protracted conclusion, following a myriad of farcical and dramatic incidents, it has been intermittently entertaining but definitely unfulfilling.