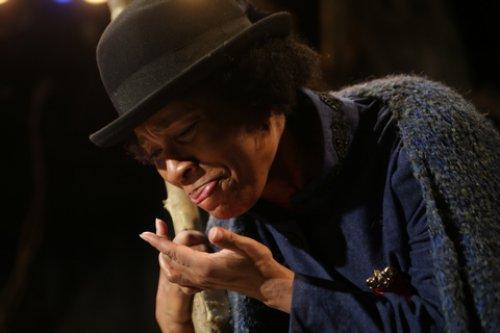 Among the numerous characters Karen Jones Meadows powerfully enacts in her self-written and compelling solo play, Harriet’s Return: Based Upon the Legendary Life of Harriet Tubman is Harriet Tubman from childhood to old age.

Employing an authentic and strong Southern dialect, Ms. Meadows sounds and looks like she really is a person in the 1840’s. This vocal expertise combined with Meadows’ altering of her physiognomy, beaming eyes and her charisma, achieves a performance of tremendous range and depth.  She portrays Tubman’s relatives, associates and masters.  Each characterization is rendered with precision and variance. Though the piece’s tone is by its nature serious, Meadows finds humor whenever possible.

Tubman forced as a slave to pull a cart full of bricks as punishment, her making her way through a forest populated with predatory animals in the dead of night and her as an elderly woman acclaimed at a gathering in Washington, D.C., are among the memorable sequences that director Clinton Turner Davis has vividly staged. In addition to creating aesthetic tableaus, Mr. Davis has Meadows purposefully positioned at various parts of the stage throughout the presentation. 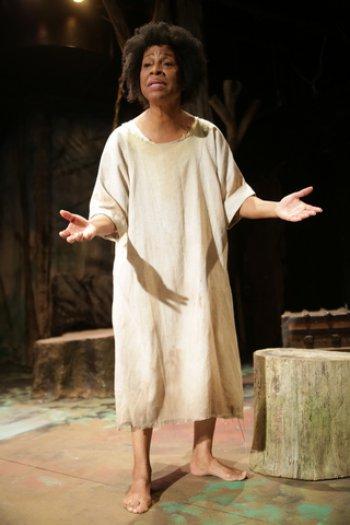 All of these events take place on the eerie, timeless and visually striking landscape by scenic designer Chris Cumberbatch. An assortment of painted trees, rocks and vintage furniture convey the stylized essence of the 19th century and the sense of menace.

Lighting designer Antoinette Tynes has a lot of shades of darkness and smoky dimness that enhances the actions. Moody sound effects such as those of a river, nature and wildlife add to the intense atmosphere.

With no accurate birth records, it is believed that Tubman was born in rural Maryland circa 1822 to slave parents with the last name of Ross.  She was sickly growing up and was a slave at several households. She married the free black man John Tubman in 1844. In 1849, she ran way and was able to make it to Pennsylvania due to the assistance of the Underground Railroad, a network of Abolitionists who aided runaway slaves. She joined the group and became known as “Moses,” as he led the Jews out of Egypt. In the next 11 years, she returned 13 times to Maryland, shepherding about 70 slaves to freedom. During the Civil War, she worked for the Union, and later became celebrated for her activities. She died in 1913 at the age of 90. 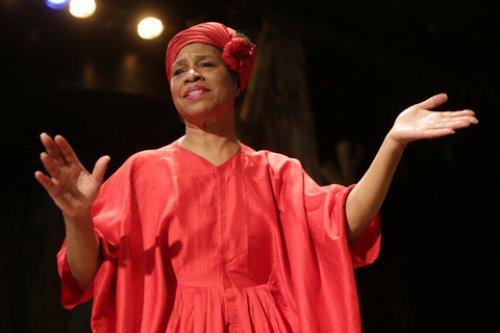 Meadows weaves many of these and other facts into her inspired script that dramatically depicts Tubman’s life through incidents, memories and reflections.

Harriet’s Return: Based Upon the Legendary Life of Harriet Tubman (through March 4, 2018)

2 Comments on Harriet’s Return: Based Upon the Legendary Life of Harriet Tubman