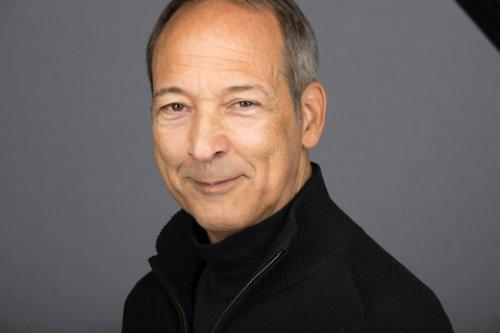 [Note: This is a review of the previous engagement.]

“Wasn’t Orson Bean somebody?…Jerry Mathers… the Beaver! This is what we call a dust off. Someone who once was but is no more” muses Jeffery Passero as he is tossing headshots into baskets in his very enjoyable self-written autobiographical solo play Casting Aspersions. Mr. Passero was a prominent casting director and the show’s conceit is that he’s looking back at his career on his last day in the profession as he cleans up his cluttered office. Corbin Bernsen, Traci Lords, Robby Benson and Brenda Vaccaro’s images are also dispensed with.

Passero’s expressive tenor voice, twinkling eyes, seasoned character actor presence which recalls that of Michael Tucker and jovial personality enables him to entertainingly chronicle his interesting life in 75 breezy minutes. The memory of his parents bringing home the original cast recording of Cabaret incites a smashing rendition of “Willkommen.” It’s one of several delightful musical interludes with selections from Applause, equally as accomplished. A wicked Nicholas Cage is among his several spot-on impressions of those he’s been in contact with. Mentioned in stories are Paul Rudd and Leonardo DiCaprio.

A running gag has Passero dealing on the phone with a deluded director trying to cast the lead of his low budget film The Brothel. Passero patiently explains that Kate Winslet and Cate Blanchett aren’t realistic options. Then it’s on to Kristen Scott Thomas. Passero believes he might be able to get her sister Serena. Then there are amusing behind the scenes tales of casting Platoon and The Bonfire of the Vanities. Recorded phone message form anxious actors are hilariously interlaced.

Passero’s Italian-American father was a mid-level RKO Pictures executive and his Jewish mother was a big band singer. They gave up their show business aspirations to work in his maternal grandfather’s Connecticut home furnishings store. We hear his mother’s sensational recording of a radio commercial for the family business. Eileen Heckert, Horace McMahon and Frank Gorshin were among the celebrity patrons encountered. Of course, Passero is consumed with being an actor and demonstrated talent in school shows and as Cornelius Hackl in a local production of Hello, Dolly! and he does a terrific “Put On Your Sunday Clothes.”

After graduating from college in the 1980’s, he moves to Manhattan’s West Village where he works as a waiter and studies acting at HB Studio. His circuitous life path takes a monumental turn as through a fluke he becomes the casting director for the Roundabout Theatre Company and then later gets a job with the distinguished English casting director Mary Colquhoun. He moves to Los Angeles in the 1990’s, opens his own business and has a happy marriage that yielded three children.

The sharp writing has been finely shaped into an assemblage of comical and poignant anecdotes. This, combined with the temporally shifting narrative, makes for a pleasant and enlightening experience.

Casting Aspersions is a worthy edition to the theatrical genre of behind-the- scenes one-person shows by those involved in the entertainment industry.