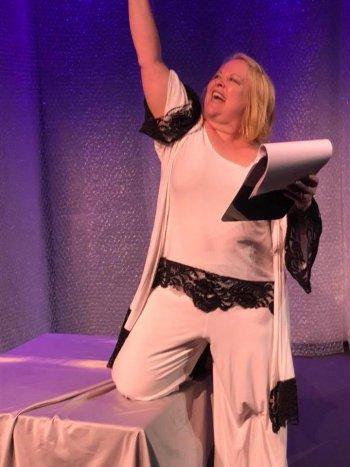 “It’s important to become parents in any way that works” is an observation gleaned from Old Testament stories of barren wives’ machinations in obtaining a child. This insight occurs during a sequence of the frank, compelling and informative autobiographical solo play Another Woman’s Baby, written and performed by Julie Rae Mollenkamp. That portion deals with historical details of and various religions’ views on the subject of surrogacy.

Ms. Mollenkamp’s first marriage lasted nine years. “Our attempts to become a family ended in two disrupted adoptions (one American and one from India), fertility treatments that resulted in five miscarriages (one was twins), a radical hysterectomy and a divorce.”

Her second marriage is likened to the 1990 movie White Palace starring Susan Sarandon and James Spader about a romance with a considerable age difference. She is 19 years older than her second husband whom she married in 2008.

Unable to conceive, the couple decided to pursue surrogacy over the more restrictive method of adoption to have a child. In the course of 75 minutes that are filled with drama, comedy and suspense, we learn of the numerous physical, psychological and legal complications that were involved in creating their family that would eventually include two children. Facts about the surrogates are richly and affectionately imparted.

From the booming opening to the marvelous curtain line the well-observed writing’s poignant, comical and clinical strands are quite skillfully woven together into an acute narrative.

Blonde, of ample physique, and possessed of an appealing matter of fact vocal delivery that soars with range, Mollenkamp has an engaging everywoman persona. She veers from dry humor to raw emotion with flair. 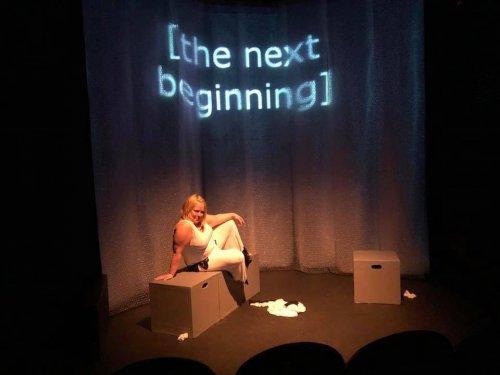 No time to memorize lines with a husband, two kids and a full-time job.

That proviso is manifested by the clipboard that Mollenkamp carries around for most of the show with single-sided pages of the script. This device appears more for prompting and security as she authoritatively delivers her monologue with quick glances at it or not at all after she tosses it away during an outburst.

Director Cat Gleason’s resourceful staging has Mollenkamp in perpetual motion making full use of the playing area for optimum visual effect.  Ms. Gleason also places Mollenkamp in the theater’s aisle, on an adjacent staircase and has her often address the audience directly with eye contact. Such flourishes inject immediacy, momentum and theatricality to the production.

Julie Rae Mollenkamp is a professor at the Graduate Coordinator of Theatre at the University of Central Missouri and has an extensive background as an actor, director and playwright. Her theatrical aptitude is evidenced by Another Woman’s Baby’s moving sincerity and accomplished work as a documentarist.