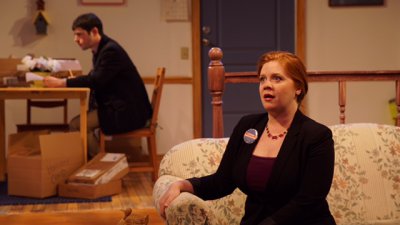 Gracie Gardner’s Primary is an amusing and bittersweet domestic comedy about a female conservative schoolteacher running for the Connecticut state legislature over the course of three months in early 1999.

Instead of a satirical take as in the film The Candidate (1972) or HBO’s television series Veep, the treatment of the subject here is realistic in the mode of Norman Lear’s 1970’s situation comedies such as Maude.  The toll of the campaign on Laura’s good-natured husband Arthur, her troubled nine year-old daughter Sophie and her resourceful young campaign manager Nick are insightfully explored.

Laura Hollister, a 30ish math teacher at a private school comes home one evening after a community meeting and announces to her family that she has decided to challenge the female incumbent in the Republican primary for state legislator.  Incensed at Frances Lindy’s dilettantish and liberal positions and that she is running unopposed spurs Laura to this impulsive action.

Nick is a 27-year-old nerdy bank teller who previously ran and lost in the primary for the position and sees a victory by Laura as his chance for future political glory.  Affable husband and engineer Arthur soon grows contentious with the disruption of the family’s harmony. Bright and strong-willed, Sophie has medical issues that cause complications with her mother’s quest.

Ms. Gardner has written a very enjoyable play with serious overtones.  It is excellently structured in short scenes that with artful craft all take place in the family’s living room.  The dialogue is often highly comic with dramatic qualities that delineate and endow the characters and situations with believability.  The overall result is a pleasurably old fashioned and well-made play.  There are, however, two hyper fantasy sequences that don’t quite fit.

The novelty that the heroine is a conservative rather then a liberal and expresses her beliefs on issues such as abortion with matter of fact conviction is a relative change of pace for a contemporary play.  The 1999 time frame allows for a great deal of topical humor in regard to Bill and Hillary Clinton. Matters relative to suburban Connecticut add flavorful specificity. 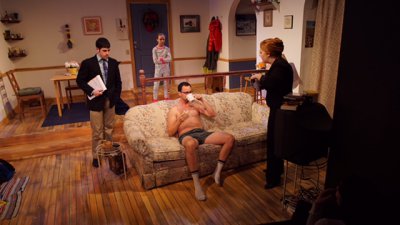 The play is enhanced by the accomplished cast who with their engaging performances all deliver the right balance of farce and seriousness.

With her expert comic timing, vivaciousness and most crucially an innate everywoman persona, Jody Christopherson as Laura is the dynamic centerpiece of the play. Ms. Christopherson breezily veers from tossing off one liners and zingers to conveying conflicting emotions.  She truthfully depicts a wife and mother grappling with pursing a career in politics with all of the intrusiveness that involves.

Bespectacled, in khakis and Nick’s one blue blazer, Brian Miskell quintessentially embodies the hapless striver.  The youthful Mr. Miskell is dry, intense and very funny.  His skillful range captures the poignant core of the character.

Lazily hanging out in plaid boxer shorts, drinking beer, singing along to Bruce Springsteen, Kevin Argus is joyfully laidback as Arthur. Mr. Argus also expertly throws well-done temper tantrums as the character reacts to the unfolding hypocrisy.  Argus has great tenderness and chemistry during his exchanges with his daughter. She is played by Casey Nadzam in a delightful child performance.  Ms. Nadzam winningly and convincingly portrays the feisty Sophie with precociousness that’s empathetic rather then cloying.

The staging by director Alex Keegan briskly mines the comedy as well as the sensitivity with the fine performances and physical aspects.  Lucia Knell’s choreography is adept for the off-kilter make-believe portions. 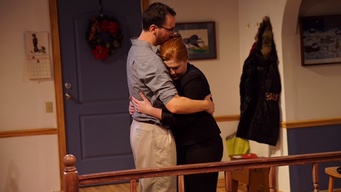 Sarah Stolnack’s lighting design is suitably natural for most of the action and stylishly surreal when needed.  The same can be said for Lawrence Schober’s sound design.

From Laura’s working mom outfits and dressy campaign attire to the men’s chinos and button down shirts, and to Sophie’s tie-dyed T-shirt and photo-op little girl dresses, Anna Winter’s costume design is a vividly subtle array of perfect looks for the characters.

This is a production of the Sanguine Theatre Company and its 6th Annual Project Playwright Festival. Excerpts from three to five finalists that have been selected from many submissions are performed in front of an audience in January. The winning play is based on their votes and is then given a full production.

Primary was this year’s winner.  It isn’t monumental, but it is the sort of smart and thoughtful entertainment that is welcome on the stage.