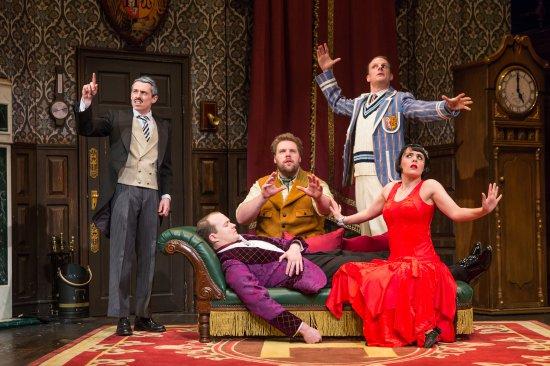 From its misprinted title on the Playbill program cover–which appears as if it had been erroneously offset by the printer–to its continual presentation of pratfalls and slapstick gags, The Play That Goes Wrong is a sheer delight. It should not come as a surprise that three of the eight cast members (Henry Lewis, Jonathan Sayer, and Henry Shields) wrote this escapist and frivolous entertainment which presents a trite murder mystery called “The Murder at Haversham Manor” as if it were being put on by the Cornley University Drama Society in the British hinterlands.

Haversham Manor is the English country home of Charles Havisham, who is discovered dead on the chaise lounge at the beginning of the play-within-the-play, even though the actor playing Charles (Greg Tannahill) mounts the chaise with a certain amount of fumbling difficulty, fidgeting this way and that. He’s nothing less than a wayward corpse, in other words, who’s sat upon, time and again, by one and then another of the other characters. The corpse that will not die also makes recurring appearances throughout the proceedings.

The Play that Goes Wrong actually commences as the audience is assembling in their seats and loud, pounding “Star Wars”-sounding music is filling the auditorium. Technical people are fiddling with the set: they’re repairing a floor-board that keeps popping up, trying to get a recalcitrant door to remain closed, and attempting to affix a mantel above the fireplace, though it keeps falling off. In a way, the truly busy set, designed by Nigel Hook, is the real star of the show, especially when an upper floor or ledge–ostensibly Charles’s study–comes unhinged, with two actors on it, tilting downwards. And it became unhinged, of course, when another player runs into a front post, knocking it down.

We are introduced to The Murder at Haversham Manor by the play’s director, Chris–a dashing, mustachioed Shields–who apologizes for “our little box office mix-up,” before adding that he hopes that the “617” of us in the auditorium will “enjoy our little murder mystery just as much as you would have enjoyed Hamilton.” Fortunately, The Play that Goes Wrong does not become the booby prize such a statement might suggest. 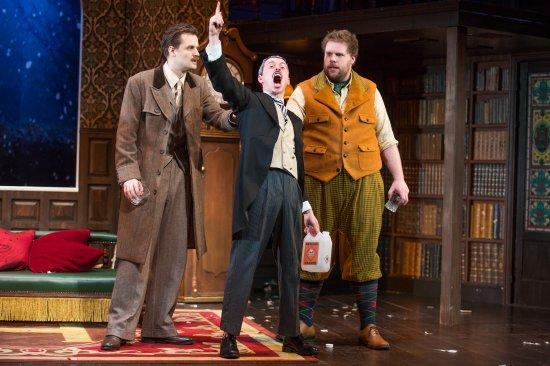 The depiction of a typical English manor is achieved with the aforementioned chaise in the center of the room, a grandfather clock, and sheathed swords on either side of the fireplace, above which hangs a portrait of a King Charles spaniel. In the end, practically everything we see from the beginning will have been put to madcap and zany use–and often stand in for something else.

There are dizzying contradictions between words and actions, or differences between what we hear and what we see. Indicating the painting of a dog above the fireplace, the detective investigating the murder (Shields, again, in his far more extensive role) says, “This is your father in the portrait, is it not” And there’s also the constant confusion of misplaced or substituted props. You might ask, how on earth can a set of keys be used as a pencil, a vase of flowers stand in for a notebook, or a grandfather-clock represent a comatose person? Yet they do.

Without even being there or seeing it, you can easily imagine what transpires when one of the characters now prone on the chaise lounge is asked to “Remove her hands from her face,” while pointing to the clock,. And then there’s the sword that breaks in half during a duel, prompting Cecil to say “Ching! Ching! Ching!” as he slashes at the air with his useless weapon. Dave Hearn, who plays Cecil so brilliantly, also becomes, in Act II, Arthur, the Haversham gardener, whose invisible dog Winston keeps yanking at the leash-and-collar Arthur wields.

That comatose person on the chaise is Charles’ fiancée Florence played with exaggerated silent-film, vamping techniques by Charlie Russell. But then, all of the actors mug or play to the audience’s reaction, and none more so than Hearn, who, as Charles’ brother Cecil, milks the laughter and applause at every turn. Similar things can be said of Nancy Zamit, who is one of the technical assistants, at first, but later has to go on as Florence once the original is knocked out. About half an hour into the performance, it seems like everyone will eventually become a corpse. “This set’s a bloody deathtrap,” says Rob Falconer, as Trevor, the lighting and sound technician, who–after screwing up the cues from his perch in a theater box above–is also pressed into action, when another player conks out. 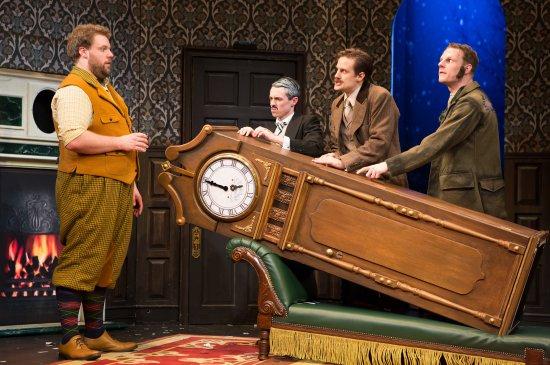 And then there’s Sayer who, as Charles’ butler Perkins brings to mind a cross between John Waters and Paul Lynde. Perkins is constantly pouring whiskey for the other characters–from a container that’s clearly marked “Paint Thinner”–compelling every one of them to take a hefty swig and spray it back at Perkins’ face. Perkins is also given to uttering one malapropism after another, such as saying, “ky-a-nid-ee,” when he means, “cyanide,” or “omoo-noose” instead of “ominous,” and “more-us” in place of “morose.”

Finally, it’s Lewis (one of the play’s three authors) as Thomas, Florence’s brother, who has to contend for the longest time with that tilting ledge–not to mention a disobedient potted plant and a desk and a globe, all of which threaten to come crashing down to the stage below. In the play’s funniest moment, four of the eight cast-members form a human-chain for the phone cord, connecting Thomas to an incoming call from a phone that’s out-of-reach, while he’s stuck up on that tilting shelf.

Though they’re playing strictly amateurish actors, rest assured every member of the actual cast is a professional. Each is also something of an acrobat and a clown, at moments in league with Keaton and Chaplin. As directed by Mark Bell, the emphasis is always on the forward gait, or gallop, as the case may be, without ever missing an opportunity for another mugging moment or something else to go “wrong.” And the bellyaching laughter proves practically non-stop, given the divine timing and comic capabilities of the ensemble.  Roberto Surace’s perfectly apt costumes include a “Cats” tee-shirt for one of the technicians, a purple smoking jacket for Charles, and a red-flaming flapper’s gown for Florence. Better still, they all look a tad low-budget, as we would expect of the Cornley University Drama Society.

While the non-stop buffoonery is reminiscent of Charles Ludlam and his Ridiculous Theatrical Company, this British import (produced by London’s Mischief Theater, no less) immediately evokes inevitable comparisons with Noises Off, Michael Frayn’s divine and (admittedly, more) sophisticated farce about a community theater company putting on a play–perhaps the most hilarious, theatrical farce that has ever been devised by a playwright. But the present offering also has less of an agenda, settling for the sheer mayhem of putting together a group of people on a stage, during an ongoing performance, when absolutely everything that can possibly go wrong, does. It’s a surefire setup for the comic and rewarding chaos that ensues. In the end, and basically throughout, The Play that Goes Wrong has gone very right, indeed.

The Play that Goes Wrong (reopened on February 20, 2019 at new location for  open run))

Running time: two hours and five minutes including one intermission