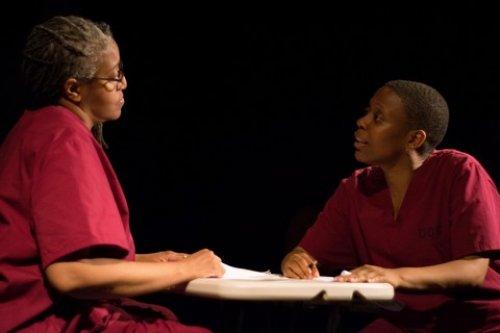 Humming and dancing to the theme from Sanford and Son and comically studying for their GED tests is how we meet two African-American women who’ve become best friends while imprisoned in a New York State penitentiary. Ann is a lifer in for murdering her abusive husband and writes poetry. The younger Mary was a crack cocaine dealer and has been promoted from making sandwiches to fry cook in the prison kitchen. Yoga, drawing and poring over legal cases are among her pursuits.

Documentary detail is blended with theatricality in playwright Catherine Filloux’s heartbreaking drama whatdoesfreemean? Ms. Filloux combines the unraveling Mary’s redemptive journey with the suspense of whether she can mentally keep it together in order to obtain an early release.

This work was initiated and nurtured by the women-centric theater collective Nora’s Playhouse in 2015 and is based on extensive research on the subject and interviews with ex-offenders and experts in the field.

Filloux in collaboration with director Amy S. Green have distilled the raw data they gathered into a searing and poignant narrative containing absurdist flourishes that include a talking laboratory mouse. The play is structured as a series of short pungent scenes. Filloux’s dialogue poetically conveys the harsh realities the underprivileged face and their bleak worldview.

A prison guard is patrolling the small three-sided theater when the audience enters and he gruffly speaks to some of them.  Metal chairs that are rearranged to indicate differing locations, a gauzy white curtain on which atmospheric black and white images of fences and waves are projected are among the elements scenic designer Phoebe Mauro uses to create a claustrophobic and oppressive prison setting. Ms. Mauro’s shadowy lighting design completes this grim environment. Sadah Espii Proctor’s nightmarish sound design and stark projection design further adds to the sense of confinement.

A highlight of Ms. Green’s intense staging is a stylized brawl between Mary and two guards that results in her being placed in solitary confinement. There she hallucinates visits from the articulate rodent, her deceased mother and Thomas Merton, whose books she has been reading. The opening sequence is another showcase of Green’s command of the visual as Mary imagines herself as a slave running away in slow motion while Abraham Lincoln is in view reciting the Emancipation Proclamation.

With her wide-eyes, close-cropped hair and beaming presence, Lisa Strum is towering and shattering as Mary. Ms. Strum mines all of the character’s pathos and humor with her charismatic performance that is the play’s centerpiece. 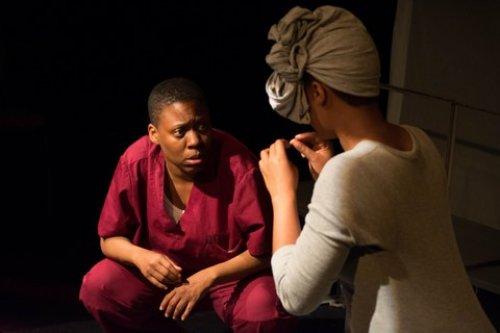 Brenda Crawley’s gray dreadlocks, serene countenance and smooth cadences make her portrayal of Ann indelible. Ms. Crawley also performs to great effect as Mary’s idealized mother and her rich voice is heard as another character. She and Strum have marvelous chemistry and their interactions inject much resonance to the production.

Demonstrating wondrous versatility is Liz Morgan in several roles. As the cheery do-gooding parole official, Ms. Morgan radiates benevolence while she dispenses Dr. Seuss books.  She is savage playing a prison guard, steely being an inmate desperate for shampoo, and hilarious as the intellectual mouse. Morgan transforms her looks and manner often with incredible speed for each of these recurring appearances.

Vividly veering from good to evil with is Galway McCullough. Mr. McCullough plays Lincoln, a vicious guard, the philosophical Thomas Merton and the neutral parole board director, all with appropriate flair. McCullough also adeptly choreographed the periodic and brutal fight scenes.

Getting the production off to a jolting start is the youthful Justin Jorrell as the stern and belligerent guard who harasses audience members with authority. Mr. Jorrell is equally as effective during the actual play.

Life behind bars has long been a dramatic staple and the inspiring whatdoesfreemean? trods this familiar territory with fierce emotion and presentational verve.