Patrick Foley and Michael Breslin in a scene from “This American Wife” (Photo credit: Marielle Solan)

Though overall an excruciating experience, thanks to its accomplished multimedia presentation This American Wife is bearable and its 80-minutes pass briskly. Inspired by the very popular The Real Housewives television franchise, the show is a series of ultra-meta vignettes where two smug young self-identified gay men enact their reverence for this cultural phenomenon. It’s intended to be hilarious but isn’t as its performers simply aren’t funny and are devoid of charm.

The audience enters and scenic designer Stephanie Osin Cohen’s gleaming white broadcast studio set is on display. Clips from The Real Housewives are playing on a television screen. Eventually a differing set of clips from the show on another screen play simultaneously. Fans of it will be enticed and those unfamiliar with it might be intrigued. Soon, the two players in their 20’s enter and stand at mounted microphones and in whispery tones describe their obsession with the program for 15 minutes. 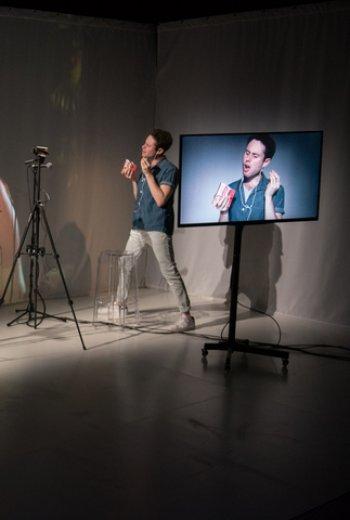 Patrick Foley in a scene from “This American Wife” (Photo credit: Marielle Solan)

Premiering on the Bravo network in March 2006, The Real Housewives of Orange County was a reality series inspired by the smash hit television drama Desperate Housewives. It followed the glamorous and tempestuous lives of a group of upper-middle women. The show’s tremendous success led to spin-offs set in New York City, Beverly Hills, Washington, D.C., Atlanta, New Jersey, Miami and Dallas. There were further spin-offs and many of these editions presently continue to air with new episodes.

A compelling visual and aural landscape is created by the high caliber efforts of lighting designer Krista Smith, sound designer Michael Costagliola, projection designer Wladimiro A. Woyno R. and technical director Kevin Belcher. The harried offstage voice of production stage manager Abbie Betts is sometimes heard from a control room as she is called upon to banter with the performers.

They are the dark-haired Patrick Foley and the backwards baseball cap wearing Michael Breslin who are clad in credited costume designer Cole McCarty’s street clothes. With a nod to Brecht, they also wrote This American Wife with the assistance of two dramaturgs, Catherine María Rodríguez and Ariel Sibert. There is no billed director. The duo resolutely demonstrates a paucity of talent in both fields as they assuredly carry on with the supreme confidence of indulged youth.

Reveling in their grating vocal affectations, gesticulating at a fever pitch or moving catatonically and projecting snarky personas they hold forth on their revered subject in various permutations that are video broadcast without making any impact. This involves interviewing each other, acting out bits from The Real Housewives and mouthing the words to scenes from it. Periodically the clips are also on the back wall’s large screen with their images superimposed.  Personal asides include discussions of being single, a cold take on pornography and their fabulous lives.  At one point, Mr. Breslin sheds his hat to put on a blond wig and women’s clothing to furiously dance in what is supposed to be a tour de force.

“The audience should be somewhat confused as to whether it’s based in truth or not. That’s reality, after all,” is from the stage directions describing the final sequence. In it Foley is being interviewed by Breslin about their show’s background. The New York University and Yale alumnus Foley has previously made proud mention of being “privileged” and now states that his parents paid for this production. He then goes on to express the belief that the best art comes from the upper-middle class, citing Richard Foreman, Richard Schenker, Robert Wilson and Julian Beck. Does he believe this? Is what they’ve been telling us all true? Is this all a put on? Since there’s been such an absence of entertainment or insight by the time of this wrap up none of it really matters. 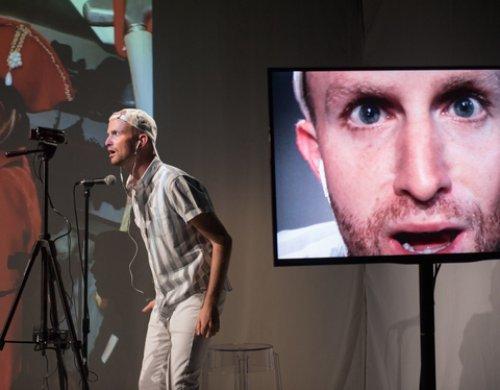 Michael Breslin in a scene from “This American Wife” (Photo credit: Marielle Solan)

The show’s title is undoubtedly a play on the long-running radio show This American Life and indeed the dialogue is often a soft-spoken parody of the cultural and politically correct jargon heard on it.

Mesmerizing, campy and of sociological interest, The Real Housewives is certainly worthy of a theater treatment possibly along the lines of a nightclub sendup, a drag spoof or a mock serious analysis à la Sandra Bernhard. Michael Breslin and Patrick Foley’s shtick might have made for some amusing YouTube videos but as a full-length stage piece This American Wife is so encrusted with smarmy pretentiousness as to render it as masturbatory tedium.

Next Door at NYTW