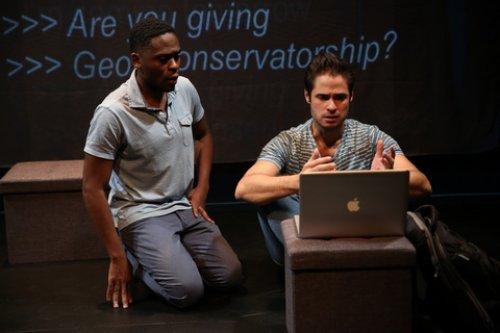 Sam is in a coma in the hospital. His husband Paolo is at their apartment in Washington, D.C., where he’s visited by his black lover, Tyler. Before long, Sam’s lover Geoff stops by Paolo’s home, and it’s not too long before the two of them are kissing each other as well.

Welcome to The Waiting Game, a play by Charles Gershman, which has the makings for a meaningful drama, but never really amounts to much. A large part of the problem is the nondescript and dull staging, as directed by Nathan Wright, which doesn’t really bring any of the characters alive. And then there’s the writing, also nondescript and dull, does nothing to make the characters real–nor does it contain anything resembling exposition.

It’s a pat formula for a script, which defies description. Given the story, if it can be called that, and the writing, basically nothing believable or credible happens. It just consumes time and space, while one drifts off into a coma-like place of his own for practically 70 minutes. 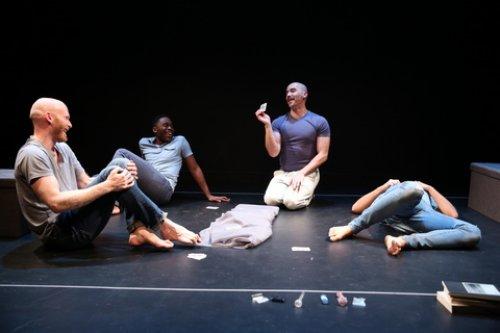 The one conflict is that Geoff wants Paolo to name him as Sam’s conservator, because he also wants to have the plug pulled on the brain-dead Sam and have him put out of his misery. But Paolo, who can’t let go of the past, wants Sam kept alive under any circumstances. And one has to wonder if their ten-year marriage was all that good, considering that each had another lover.

According to Gershman’s script, Sam, “doesn’t need to be cast. Open to creative interpretation.” Unfortunately, Wright has decided to include an actor (Ibsen Santos) who doesn’t have a word to say, and who walks around the perimeter of the stage like a zombie, at a snail’s pace, every so often striking an awkward pose. It certainly can’t be considered “creative,” to reiterate Gershman’s word for it.

Wright also bears at least some of the responsibility for the uniformly stiff and artificial performances, which, in addition to Santos, include Marc Sinoway as Paolo, Joshua Bouchard as Geoff, and Julian Joseph as Tyler. Aside from the nonexistent set by Riw Rakkulchon, the one creative element worthy of praise is the projection design by Kat Sullivan, who takes words from the script and projects them on a screen, even if the letters become as jumbled as the script.