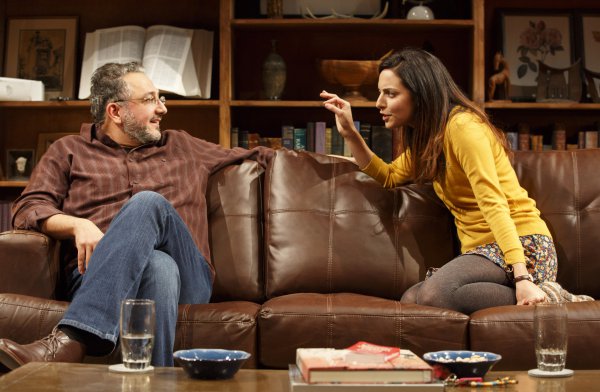 Slight and unsatisfying, The Profane is a contemporary drama set in New York that tackles the cultural differences between a non-believing Muslim family and an observant one when their children fall in love and want to marry.

Playwright Zayd Dohrn has a facility for setups, punch lines and zingers that might play well as an HBO situation comedy attempting to mix humor with seriousness.   As a theater piece, his premise has potential but his execution is deficient.

A W.C. Fields joke is quoted.  The opening sequence is silent, as we learn about one of the characters while he is alone and enacts comic shtick.

Mr. Dohrn bizarrely and strategically does not state what country his characters are from, and that’s a significant defect that adds layers of distance and artificiality to the plot.  His dialogue is biting, the construction is solid, however the resolution is anemic. 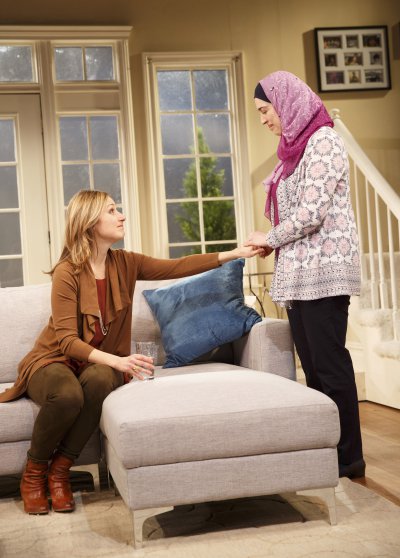 Act One takes place in a book-lined Greenwich Village apartment where we meet the Almedin family.  The Scotch drinking, James Joyce admirer Raif is in his late 40’s, and is a novelist with a small reputation. His amiable wife Naja is a dance instructor.  They are immigrants to the United States who went through an arranged marriage in their country of origin. Born Muslims, they have totally assimilated.  Their flamboyant, 24-year-old daughter Aisa lives with them.  She is a modern dancer who works as a bartender.  She is also a lesbian who hasn’t come out to them.

Their 21-year-old college student, younger daughter Emina, arrives for Thanksgiving weekend with Sam, her 22-year-old boyfriend.  He is a pre-med major at Syracuse University and was raised as a devout Muslim by his religious parents.  The couple has gone together for over a year and abstains from alcohol and sex, as per their religious beliefs.  Emina became devoted to Islam after joining a Koran reading group in college, and has found spiritual fulfillment.

The secular Raif is appalled by Emina’s actions.  Naja has a more measured reaction.  Their marriage has cracks due to an affair Raif had in the past. The first act concludes with a jolting cliffhanger that doesn’t get revealed until near the play’s finale.

Several months later in Act Two, at their airy White Plains house, we meet Sam’s parents, the immigrant Osmans. Gregarious Peter is a prosperous salesman of kitchen equipment.  The head-covered Carmen is his stern but magnanimous wife.  They’re holding a dinner party to meet their future in-laws.  There is amiability and tension as it all builds to a dramatic conclusion.  The perfunctory ending leaves the audience confused until they realize that it’s time to applaud.  Nothing is very compelling. 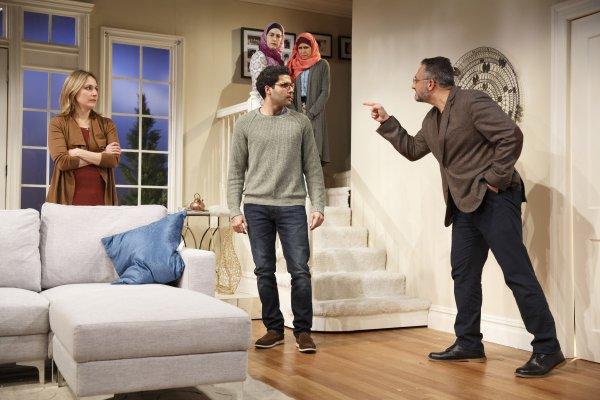 Director Kip Fagan’s staging is basic and doesn’t add much to the presentation.  That’s most evident when Raif has a violent outburst at the Osman’s house.  It’s a moment that could have been galvanizing but is wanly rendered.  Mr. Fagan’s work with the actors is equally as indistinct.

Ali Reza Farahnakian as Raif, Heather Raffo as Naja, Tala Ashe as Emina, Francis Benhamou as Aisa and Babak Tafti as Sam all deliver capable but overly emphatic performances that uniformly don’t register as fully realized characterizations.  They come across more as types rather than actual people.

The burly, bearded and bald Ramsey Faragallah as Peter is magnetic, immensely personable and energizes the production with his commanding simplicity.  The charmingly serene Lanna Joffrey as Carmen offers a richly detailed portrait of a modern, down to earth, religious matriarch.

The characters are all authentically visualized by Jessica Pabst’s costume design.

The Profane strives for topical relevance but is undone by its blandness and generic approach.