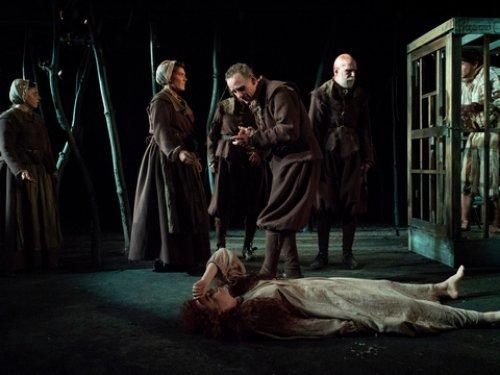 Chad Yarborough’s set for Axis Theatre Company’s Strangers in the World is a stand of scrubby tree trunks, with no leaf or bud or anything green in sight. It seems a rudely fashioned birdcage made of wicker, and it hints at the ambiance of barrenness and despair that the play—written and directed by Axis’ artistic director, Randy Sharp—will evoke.

The story takes place in a North American Puritan settlement in 1623. Life has been hard for these refugees, and many have died. Severely cold climate, disease, conflicts with indigenous people and interpersonal acrimony have reduced the remaining pioneers to a band of dead-eyed, gibbering beings, who speak of having lost their former “manner.”

According to Sharp—in a publicity statement for the production—the play is not meant to be a realistic physical depiction of an actual New England settlement. Rather, it aims to “show you what it felt like to be in the village.” That is to say, like camping out on a narrow stretch of hell. The characters blab ceaselessly, but they seem seldom to hear one another’s words. Sometimes they shuffle aimlessly about the stage. Their minister has been killed, leaving them without a spiritual leader. But most of them have little hesitation about measuring and proclaiming one another’s sinfulness.

The story opens at a moment of potential change for the village. A stranger named Olean (Phil Gillen) has washed up on the rocky beach from a ship just offshore. Costume designer Karl Ruckdeschel has dressed this character in a once-elegant but now distressed white garment, with a ruff, no less—in striking contrast to the dark and dowdy clothing of the Puritans. The villagers are at first unsure about whether to treat Olean as savior or thief. But, before long, they have imprisoned him in a portable cage. From this odd pulpit, he proceeds to determine who among them is worthy of being saved. He claims that if they’d been godly enough, they would not be in such dire straits. They would have gone forth and multiplied, as commanded by their Creator. 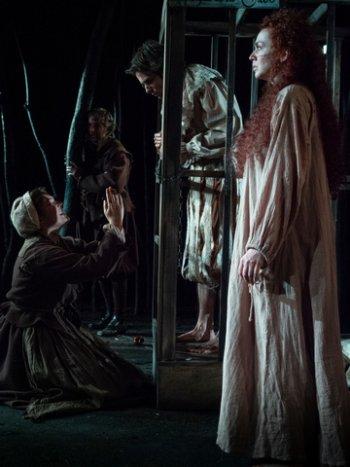 You may leave Strangers with mixed reactions. The proceedings onstage may make you feel as disoriented and tetchy as the villagers themselves. The characters’ words as they vainly try to maintain some of their former sanity and decorum seem at times to be pure nonsense. But if you’re diligently sleuth-like—or lucky enough to read and study Sharp’s playscript—you’ll piece together some fairly coherent and rich back stories.

Sharp is clearly a poet—and a talented one. Her skills at recreating the syntactically quaint but often trenchant language of these early-seventeenth-century characters is admirable—akin to what Arthur Miller was able to do in The Crucible (which was set considerably later in the American Puritan saga).  But Sharp’s direction—specifically, her decision to have the actors play the characters’ schizzy, traumatized behavior at much the same agitated (and often noisy) level throughout the play’s 75 minutes—buries much of the beauty of her writing.

Among the villagers are Killsin (Brian Barnhart), the settlement’s single remaining “selectman,” whose son has been killed and whose wife, Jane, has gone missing in the wilderness. Killsin’s brother, Distance (Spencer Aste) and Distance’s wife, Honor (Katie Rose Summerfield), are childless, apparently because of his nonconforming sexual orientation. Constance (Emily Kratter) has replaced Jane as Killsin’s wife, but she has become sexually involved with the handsome and mournful widower John Coldweather (Jon McCormick). Finally, there’s William (Andrew Dawson), the former schoolteacher, whose outrageous earlier behavior toward the children who were dying in the village makes for yet one more local scandal.

Indeed, Spoon River and Peyton Place would have nothing on this early American burg when it comes to ignominy, but things get even stranger when Jane (Britt Genelin) suddenly reappears on the same day that Olean shows up. (Whether she’s been gone for hours or for years is up for grabs.) 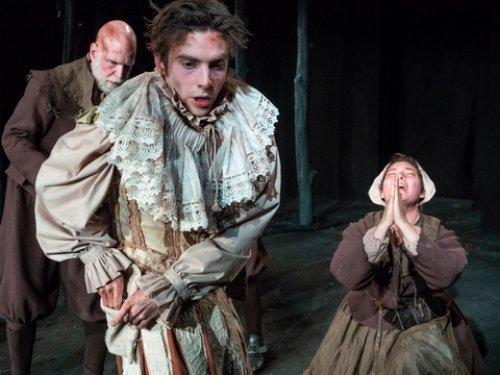 Jane claims to have glimpsed “paradise” during her time away from the village. She may be a ghost come from the beyond, who has, in fact, glimpsed unearthly paradise. Or perhaps she’s a mere mortal who has discovered a saner and more forgiving way of life while mingling with the people whom Puritans call “savages.” In any case, will the other settlers now follow her back to that paradise? Will they try to board Olean’s ship?  Or will they attempt to go to a rumored “infidel” city to the south (perhaps the Jamestown settlement in Virginia)?

This is truly an ensemble cast, and all actors strive to make things work. It’s too bad that, just as you’ve at last more or less figured out how all the characters are related to one another, the play comes to a close.

Along with the solid work of the aforementioned Yarborough and Ruckdeschel are welcome contributions from light designer David Zeffren, who keeps the cold, dim light beyond the forest trickling onto the actors from various angles. And special congratulations to sound designer Paul Carbonara. His music is chilling and grave, and the explosions of anxious cawing sounds from crows and/or gulls add to the sense that this once-hoped-for Eden is a harsh, corrupt and hopeless place.