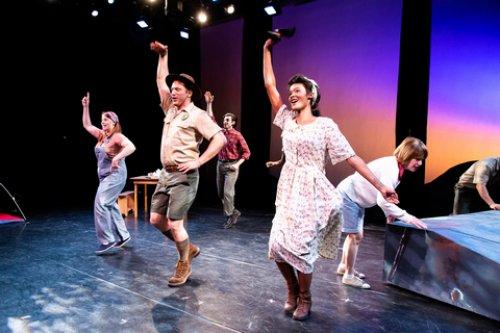 Franklin and Eleanor Roosevelt, singing and dancing National Park Service Rangers and six women from the past and present are featured in She-She-She, an amiable, time shifting and rambling play.

Conceived by Carrie Heitman and written by Cynthia Babak it was developed in workshops over the last three years by the Hook & Eye Theater company. According to Chad Lindsey’s director’s note, “I wanted to let the performers create characters and situations that answered some of our creative questions and satisfied their curiosity about themselves and the historical women at the play’s core. What emerged is best described as a rhapsody….”

As well intentioned as their goals are in dramatizing such interesting historical material, their collaboration in concert with cast members is a structurally wayward and dizzying 31 short scenes lasting 90 minutes of varying impact. The finale is quite uplifting but what has come before is often muddled. Ms. Heitman, Ms. Babak and Mr. Lindsey also all appear in the show.

The Civilian Conservation Corps (CCC) was a key program of President Franklin Roosevelt’s New Deal to rescue the United States during the Great Depression. Unemployed and unmarried men were given jobs renovating 800 parks across the country from 1933 to 1942. Eleanor Roosevelt pressured FDR to create a similar setup for women. This was instituted in 1935 and was affectionately nicknamed the “She She She.”

Pauli Murray (1910–1985) was an African-American lawyer and political activist whose correspondence with Mrs. Roosevelt began in 1940 and led to a friendship that lasted until Roosevelt’s death in 1962. Their relationship is cited by the creators as an inspiration. 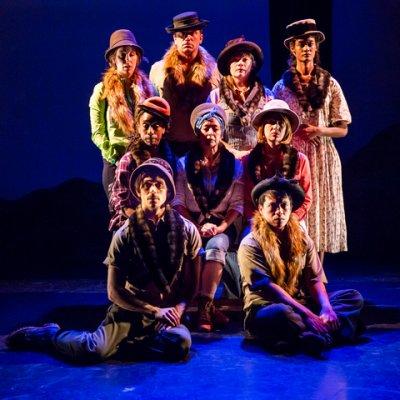 The Ensemble in a scene from “She-She-She” (Photo credit: Al Foote III)

The action takes place in New York’s Bear Mountain State Park. In 1935, we meet the unemployed African-American and pregnant Cornelia, Rivka is a Russian immigrant who gave up her daughter for adoption and Maureen from Appalachia who has left a troubled marriage.

These six characters are presented in various permutations with the two time periods bisecting. Several rangers and other incidental characters also appear.  There’s a lot going on and many of the details in this review were gleaned from reading the script’s list of characters as it’s not that clear who’s who from actually watching the show.

Lindsey’s direction has energy, confidence and a strong visual sense that infuses the production with force but cannot compensate for some superficial and extraneous sequences such as a character being in a video game displayed as a production number. 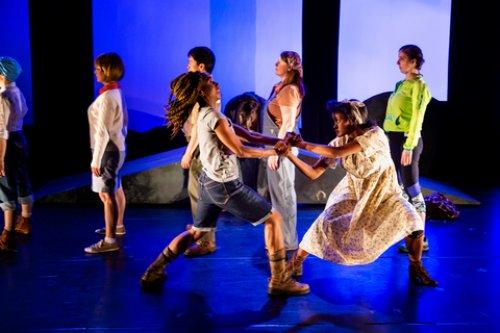 A marvelous simple backdrop of trees dominates Patrick J. Burlingham’s neat scenic design that has benches, minimal furniture and a two-part platform that breaks away and gets reassembled to depict various locations. Mr. Burlingham’s creativity allows for everything to flow fluidly.

Contemporary wear, 1930’s rustic fashions, and ranger uniforms as well as a Rosie The Riveter kerchief are all on display in Krista Intranuovo’s fine costume design. Most striking is a wild boar outfit for one of the wackier scenes.

She-She-She’s historical details, many back stories and numerous incidents are crammed together into an intermittently appealing but ultimately unsatisfying work.

The Mark O’Donnell Theater at The Actors Fund Arts Center